For twelve days, President Corey and first lady Paula Corey ventured along with the Biola Chorale to South Korea to inspire, connect with and cultivate new friends of the Biola community. Prominent Korean pastor and chairman of the Far East Broadcasting Company (FEBC) Billy Kim and his staff hosted the tour.

The 35-person Chorale performed ensembles in a variety of venues ranging from churches to schools to concert halls in different cities all over the country. Students sang together at more than 25 performances, joyfully sharing their gift of God-honoring music which was well-received by their audiences who welcomed them with gracious hospitality. 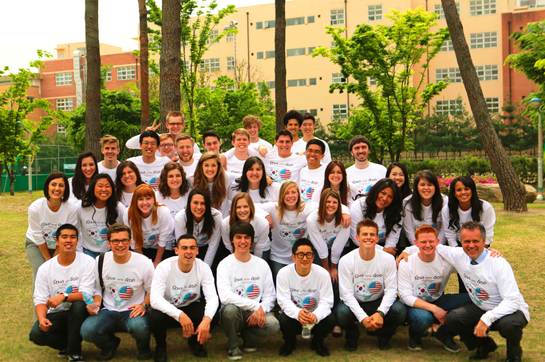 While the choir sang compositions such as a beautiful rendition of Psalm 23 in Korean, President Corey met with church leaders, university directors and other significant figures in Korea to impart Biola’s vision and invite them to join in supporting its mission. Additionally, Paula Corey reached out to groups of women in South Korea and President Corey preached a few messages of encouragement at local church services during the trip.

In response to the horrible disaster of a ferry capsizing killing hundreds off the coast of South Korea on April 16, the Biola Chorale and President Barry Corey gathered in solidarity to join those in grieving. The ferry had been carrying 467 passengers and crew, 300 of whom were high school students on a field trip, when it sunk due to excess cargo weight. More than 268 people died and divers are still recovering missing bodies from the debris.

The students sang Psalm 23 in Korean with the families and friends of those who had lost loved ones in the accident. They were joined by those present in lifting up the hymn Amazing Grace in both English and Korean as many tears flowed from American and Korean eyes alike as they mourned the tragedy.

Barry Corey offered words of condolence, heartfelt prayer and intimated the shared weight of the grief as the representatives of the Biola community wept with their brothers and sisters in Christ in South Korea. The event deeply touched many in the country and several major local news stations reported on the service.

Watch additional video coverage in an English report by Korea Today on YouTube.