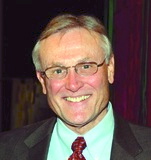 Neil A. Parent (1937 -- ) is a Catholic religious educator whose major contributions are in the areas of adult faith formation and professional development.  His leadership at the United States Conference of Catholic Bishops (USCCB) and the National Conference for Catechetical Leadership (NCCL) helped shape the forms of Catholic religious education in the last quarter of the 20th century and into the second decade of the 21st century.

Neil August Parent, son of Gerard and Fern, was born in Los Angeles, California on May 29, 1937.  He is one of five children, with two brothers and two sisters.   His early education was in the parochial schools of Los Angeles.  He attended Loyola University (now Loyola Marymount) and graduated in 1960 with a B.S. in Mechanical Engineering.  His first career position was with Pacific Telephone and Telegraph Co. in Los Angeles as a District Supervisor and Engineer.  His career with the organization was interrupted with six months on active duty with the US Coast Guard.  He served with the reserves until 1968.

After two years, he began theological studies for the Roman Catholic priesthood, first with the Archdiocese of Los Angeles and then as a member of the first American order of men, the Paulist Fathers.   During these years he earned an MA in theology from St. Paul’s College in Washington DC as well as a certificate in Clinical Pastoral Education from the Memphis Institute of Medicine and Religion.   At the end of 1968, Neil discerned that the priesthood was not his vocational calling and he left the Paulist Fathers but remained in the Washington area.  He began work for the Department of Labor as a Manpower Development Specialist in 1969.

In the early nineteen seventies a new ministry, the Director of Religious Education, was emerging in the Catholic community.  Neil signed on as the first Director of Adult Education at Blessed Sacrament Parish in Alexandria, Virginia in 1971.  At first he also had responsibility for adolescent catechesis.  Eventually, the focus of his work became adult religious education.   While working at the parish Neil earned an MA in Adult Education from George Washington University in the District of Columbia and a Certificate in Participation Training from the University of Indiana.  He founded the adult education and the family life ministries at the parish.  He recalled that his two most significant learnings from this period of his life were:  the importance of including the social gospel in all that he did and the necessity of collaboration as essential to effective ministry.   He remained at the parish until 1978.

Parish work equipped him well for his next position at the United States Conference of Catholic Bishops (USCCB) that began in 1979.  He was first hired as Representative for Adolescent Catechesis, but in less than a year, he moved over to the Adult  Education position.  As a staff member in the Department of Catholic Education Neil served as an advisor to the Bishops and the Committee on Education.  He was responsible for furthering adult education in the field.  His primary means of accomplishing this task were speaking, publishing and teaching.  In his years at the Bishops’ Conference a number of significant publications in adult education came from the department and the National Advisory Committee on Adult Religious Education.  (NACARE)

He spoke at national and international gatherings of catechetical leaders and was invited to teach at Lumen Vitae Brussels, Belgium and Sacred Heart University, Bridgeport, Connecticut.   In 1997 he was a member of a three person delegation to Hungary to explore ways that church educational leaders could assist the Hungarian Church’s catechetical efforts in the post Soviet world.  That same year, Neil was a delegate to the International Catechetical gathering at the Vatican for the release of the General Directory for Catechesis.  He continued to contribute articles to professional journals and magazines.  All told, he has published over a hundred articles on adult religious education and a number of other salient catechetical issues.

When he retired from NCCL in 2007, his abilities as a speaker, writer and facilitator were in high demand by both secular and religious organizations including The Atlantic General Hospital System, the National Council of Catholic Women and the Secretariat for the Laity at the USCCB.  In 2009, he published the widely acclaimed A Concise Guide to Adult Faith Formation through Ave Maria Press.  One of the unique features of the book is the emphasis on the adult as a spiritual sojourner.  It is also a compendium of what is important for anyone who wishes to work with adults in a church setting.

In 2011, Neil was back working full time as the Director of the Emerging Models of Pastoral Leadership Project, A Lilly Endowment funded project of five national Catholic organizations.  The project will come to an end in early 2013 when the final reports will be published.  Demographics, the priest shortage and other dynamics are calling the Catholic Church to evolve new models for leadership at many levels.  This study is an attempt to identify not only what is currently evolving but how to form leaders in these new environments.

In 2013 Neil celebrated his 40th wedding anniversary to Lynn (Meushaw).  He is the father of three adult children; Elena, Denise and Diana and grandfather of two.

Neil Parent has had a lasting impact in two areas of Religious Education.  The first being the area of Adult Religious Education.   He was one of the early religious educators hired by a parish to focus on adult faith formation.  The General Catechetical Directory (GCD) published in 1971 stated, “…..that catechesis for adults, since it deals with persons who are capable of an adherence that is fully responsible, must be considered the chief form of catechesis. All the other forms, which are indeed always necessary, are in some way oriented to it.” (GCD, 20)  Up until the release of this document, Catholic catechesis had been focused on children and youth.  In the 1970’s and 1980’s there was a new emphasis on catechesis with adults.

When Neil moved to the United States Conference of Catholic Bishops as the staff person for adult education he was in a position to further the field.  One of his early contributions was founding the National Advisory Committee on Adult Religious Education (NACARE).  Composed of representatives from all parts of the country as well as specialists, NACARE became an invaluable resource for promoting adult religious education in the Catholic community.   His exceptional skills at process design and facilitation were evident throughout his tenure at the USCCB.  Together with other national Catholic organizations they created a national initiative on adult religious education culminating in a major symposium.

After Neil’s arrival,  the Department produced excellent resources for diocesan and parish practitioners including Christian Adulthood.  The five volumes of readings published in the mid 1980’s introduced parish and diocesan leaders to the best thinking in the field.  Those who were interested in adult religious education looked to the USCCB and to Neil for inspiration and leadership.   In 1986, the Bishops’ Conference published Serving Life and Faith:  Adult Religious Education and the American Catholic Community.   Neil was the principal writer.  This seminal document was a publication of the Department of Education.  Serving Life and Faith brought together the developments in the field of adult religious education and gave it additional credibility with the backing of the bishops’ Department.  It became a guidebook for many.  Actually, the Conference did publish a workbook to help parishes process the material in the document.

For six years, he chaired the task force on Faith Development in the Adult Life Cycle , an international and interfaith project headed by Kenneth Stokes, that worked with the Gallup organization for data gathering and producing a final report in 1987.  it  bears the same name as the project.  In 1985, collaborating with the national offices of the Episcopal Church USA  and the Evangelical Lutheran Church they hosted an Adult Ministries Consultation in New York.  Its proceedings were published in Origins.  As a representative of the Department of Education at the Bishop’s Conference, he was the liaison to the educational gatherings of the National Council of Churches from 1980 until 1985.  He also served on the board of the Religious Education Association of the United States and Canada.

Under Neil’s leadership, a National Symposium on Adult Learning and the Parish was convened in 1983.  This gathering of 125 leaders in adult learning from around the country eventually led to the publication of two important books, Adult Learning in the Parish (1985) and Groundwork (1990).  Both were major contributions to the practitioners at the local level.

After eleven years at the United States Conference of Catholic Bishops, Neil left to become the Executive Director of the National Conference for Catechetical Leadership. (NCCL) in 1990.  He was to serve the organization for seventeen years.  His work supporting and nourishing a generation of catechetical leaders is the second area where his influence has left a lasting mark.

NCCL was the national professional association for diocesan directors of religious education and their staffs.  It was in a period of transition when it was considering opening its membership to parish directors of religious education (DREs).  There wasn’t unanimity among the members whether or how this was to be done.  Over the next several years, Neil led the organizational renewal.  He designed and implemented new organizational structures to streamline board governance, focus operations and expand membership potential.   The new organization brought together diocesan, parish religious educators and academics with a focus on religious education to address the catechetical issues and concerns of the last decade of the past century and the first decades of the new millennium.

He enhanced the services of the organization for its members including the publication of a new magazine, Catechetical Leader.  The membership expanded 300% to 2700 members and its annual meeting evolved into to an annual conference attracting upward of nine hundred participants.   As the representative of the diocesan and parish catechetical leaders, Neil represented the organization on many national boards, committees and task forces including the Committees on Education and Catechesis at the USCCB and the Task force for the Bishops’ Committee on Deaconate that developed The National Directory for the Formation, Ministry and Life of Permanent Deacons in the United States.

NCCL joined other Catholic professional organizations and began work on establishing national standards for those involved in parish ministry.  The work on standards continued through several iterations to become the Standards for Lay Ecclesial Ministry.

There is no doubt that Neil Parent’s leadership at the USCCB and NCCL was instrumental in bringing  adult religious education to the forefront of Catholic catechetics.  His work at NCCL nurtured a new generation of diocesan and parish catechetical leaders for the US who were prepared for the challenges of the new millennium.

Editor for the following publications by the United States Council of Catholic Bishops:

Over 100 of his articles have appeared in one or more of the following publications:

Pastoral Music, National Bible Week, Growing in the Vineyard, the newsletter of

the National Association of Lay Ministry, and Faith Alive, a syndicated feature of

One of three authors of The Catholic Way of Life -- a publication series of Paulist Evangelization, Washington, DC.  (1985 – 1987)

“I am convinced that the greatest challenge facing us today as adult catechetical learners is to bridge the gap that too frequently develops between life and faith.” (35)

“Adult catechesis is not exclusively about teachers, resources and programming.  The journey to mature Christian faith also involves substantial inner spiritual work by individuals.  The task of adult catechetical leaders is to help those to whom they minister realize that God is always present to them as teacher—indeed, that God is the primary teacher.” (67)

Edmund F. Gordon retired as Diocesan Director for Religious Education in the Diocese of Wilmington, Delaware in 2011.  He served as President of the National Conference for Catechetical Leadership and Treasurer of the International Forum on Adult Religious Education.  He is the creator and executive producer of Echoes of Faith, the most widely used catechist formation program in North America.