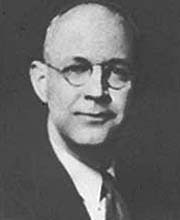 Dr. Harrison Sacket Elliott (1882-1951). A Methodist, his interest in the interplay of psychology, group dynamics, democratic thinking, and liberal theology found expression in his leadership in the Y.M.C.A., ecumenical agencies, the Religious Education Association, and Union Theological Seminary in New York.

Harrison Sacket "Sunny" Elliott was born on December 13, 1882, at St. Clairsville, Ohio, to parents Calvin Watson Elliott and Luella Augusta (Sacket). From earliest years, Elliott knew that he was a teacher. After graduation from Northern Indiana Normal School in Valparaiso, Indiana in 1901, he became a public school teacher.

For what appear to be financial reasons, Elliott took a job as stenographer with the National Cash Register Company in Dayton, Ohio from 1902-03. Elliott returned to school in 1904. At Ohio Wesleyan University, he became the part-time secretary to President James W. Bashford. This was to be an auspicious relationship. In 1905, Elliott graduated with the A.B. degree, and was appointed almost immediately as secretary to James W. Bashford, now Bishop of China for the Methodist Episcopal Church. He served Bashford in China from 1905 to 1908, augmenting his responsibilities by accepting the position of correspondent for the Associated Press from 1906 to 1908 out of Shanghai. Elliott's lifelong interest in international affairs, what we might today call globalization in theological education, began as the result of his time in China.

Upon his return to the United States from China, Elliott chose to begin theological study at Drew Theological School. He studied there from 1908 to 1911, graduating with the B.D. During the time he was a student at Drew, Elliott took the assignment as Secretary for the Africa Diamond Jubilee of the Methodist Episcopal Church, 1909-1910.

Elliott began graduate study at Union Theological Seminary and at Teachers College, Columbia University in New York in 1915. In 1918, at age thirty-six, Elliott published The Leadership of Red Triangle Groups (Elliott 1918). His lifelong interests in group process, including the application of psychological behavior, democratic principles, and scientific thinking (particularly of the Deweyan sort popular at the time at Teachers College), are in evidence in this book.

Still a student at Teachers College and Union Theological Seminary, Elliott became the Educational Editor for the Association Press in 1919. He would soon publish How Jesus Met Life Questions (Elliott 1920). Progressive educational theory and method and a social gospel liberal religious perspective blend in a creative manner in the book. Jesus was a man who had to grapple with real life questions, and such example was of value for contemporary Christians.

In 1922, Elliott was awarded the M.A. degree from Teachers College. He soon resigned from the Y.M.C.A., and took on the position of Assistant Professor at Union Theological Seminary. Following George Albert Coe, Elliott was appointed as Skinner and McAlpin Professor of Practical Theology, and Head of the Department of Religious Education and Psychology at Union Theological Seminary in 1925.

Elliott married Grace Loucks on June 27, 1927. She would become a significant executive leader in the Y.W.C.A., and was a noted psychologist who had published several books. Grace and Harrison published one book together, Solving Personal Problems (Elliott, Elliott 1936). In time, Grace and Harrison would have three children: David Loucks, Donald Harrison, and Margaret Jean. In this same year, Elliott was elected as chairman of the Y.M.C.A. National Boys Work Committee, a post he would hold until 1946. He also published The Bearing of Psychology on Religion (Elliott 1927).

In 1928, Elliott published The Process of Group Thinking (Elliott 1928), and in 1930, Group Discussion in Religious Education (Elliott 1930). In 1931, Elliott went to Oxford University, England, for his sabbatical leave. During his 1938 sabbatical leave, he remained in the United States in order to work on his doctoral dissertation.

In 1939, Elliott was elected President of the Religious Education Association, a post he would hold until 1942.

In 1940, Elliott would graduate with the Ph.D. from Yale University. His best known book, Can Religious Education Be Christian? was published the same year (Elliott 1940). In many ways, this book was a summation of a lifetime of experience and research. It signaled as well the passing of an era of Christian religious educational theory and practice. Progressive education and theological liberalism were difficult to maintain in light of the devastation of World War II. The sharp, perhaps excessive, critique of Elliott by Shelton Smith's Faith and Nurture (Smith 1941) from a neo-Orthodox perspective signaled its end of dominance within the field of religious education.

Smith's book, which provocatively summarized the major concerns of neo-orthodoxy with progressive liberalism, was a critique of "nurture" as developed by Elliott. For example, Smith questioned the normativity of the infinite value of human personality, an understanding of God evolving as the natural result of social evolution, and the denial of the sovereignty of God. Smith wrote, "Liberal Christianity has also had a part in obscuring the principle of the sovereignty of God in His Kingdom. This is reflected, for example, in the liberal's emphasis on divine immanence. If religious orthodoxy sometimes tended to deny all continuity between God and man, liberalism has tended to overemphasize continuity" (Smith 1941, 53). The critique of Smith, then, brought into sharp focus the vision of God in relation with humankind.

One may raise the question, "Did not neo-orthodox religious educators who came after Elliott continue to use the educational methods that Elliott proposed?" This is, in fact, the case. One can argue successfully that while the theological vision of God and humankind shifted significantly from liberalism to neo-orthodoxy, educational method (including the process of Bible study, group process concerns, taking into account human developmental data and moral developmental data, artistic appreciation, story telling, and social action) remained remarkably constant. It was as though neo-orthodox Christian religious educators viewed educational method as theologically neutral (something that is worthy of reflection and debate), rather than as inherently expressive of a theological vision. This was fundamentally counter to Elliott's lifelong contention that educational process must be congruent with theological understanding.

At age sixty-two, Elliott was ordained to ministry in the Methodist Church. Of all that I have read about Elliott, I can find nobody who quite understood why he chose ordination so late in life.

Upon his retirement from Union Theological Seminary in 1950, Elliott was elected as General Secretary of the Religious Education Association. The Religious Education Association was in administrative chaos, and the brilliant organizational skills of Elliott were a timely blessing. He brought new order and new hope to the organization, including a significant research grant. When Elliott died unexpectedly on June 25, 1951 of a cerebral hemorrhage at his summer home in Rhinebeck, New York, at age sixty-eight, the Protestant liberal religious educational movement in the United States was absent one of its most significant leaders and friends.

Harrison Sacket Elliott (1882-1951) embodies the rise and fall of a Protestant liberal religious education in the United States that was given theological and educational grounding by George Albert Coe at the turn of the twentieth century.

Elliott's work is original only in so far as it is synthetic. He was particularly gifted in taking a vast number of "parts" that were present in the Protestant religious education movement, and forming an holistic vision that was not present before. This is particularly true in relation to his approach to group Bible study, which is a fascinating blending and relating of elements familiar from John Dewey's work on democratic and scientific thinking with an anti-authoritarian view of teaching and preaching that was so characteristic of his day.

It is impossible to read about Elliott's life without recognizing his commitments to family, to the global church and inter-religious concern, to service to church-related institutions, to educational research in order to increase the effectiveness of teaching, and to the assumption that humans were essentially good. I sense that his assumption of the basic goodness of humanity is why it is impossible to find even one negative comment about his identity as a Christian religious educator. Certainly his writing evoked deep debate in the field of religious education, particularly after World War II. But there is no evidence of question regarding Elliott's personal and scholarly integrity.

There is every indication that Elliott thought that his book Can Religious Education Be Christian? was going to signal the rebirth of the liberal religious education movement in the United States. In fact, it signaled the end of the movement. His unexpected death in 1951, while General Secretary of the Religious Education Association, stunned the entire field.

So much of his pedagogical influence, nonetheless, remains with the field of Christian religious education today. The congruence between Elliott's understanding of group Bible study has uncanny parallels in the work, for example, of Thomas Groome's "shared praxis" approach to teaching (Groome 1991). "Globalization" was practiced by Elliott some fifty years before it became common in theological seminaries in the United States. Welcoming diversity in conversation and in teaching, so needed in our present day, may be found in Elliott's work since the 1920's. The concrete assumption that liberal religious education was a constructive force for the political and social good in democratic settings is evidenced by his work with the Y.M.C.A. His fear that persons in a democracy may be tempted to take on close-minded theological rigidity and exclusivity rings prophetic to this day.

(1927). The bearing of psychology upon religion. New York: Association Press.

While deep and strong emotion, integrated with judgment, is the source of strength in a discussion, emotional bias and bitter feeling defeat any true group process. A discussion entered into by contending groups and conducted in the spirit of an argument may end in confusion and rancor without anything creative having happened. (p. 165)

Many a difficulty of the individual caused by unhealthy social conditions is unnecessary, just as much sickness caused by unhealthy physical surroundings is preventable. The solution of many personal problems will never be possible until we have remade economic, political, and other aspects of our social relations that the rank and file of human beings have a chance to meet life situations positively and wholesomely. (p. 8)

The writer [Elliott], influenced by John Dewey's analysis of the process of reflective thinking in his book, How We Think, had developed in his work with student and other Bible and discussion groups what he termed a life situation approach. In this plan, the actual life situation being faced was described and explored in the group, the possible alternatives of action were defined, these were compared on the basis of their probable consequences in the situation, if put into effect; they were evaluated on the basis of points of emphasis in the Bible or other Christian teaching, and the group was led to make either individual or group decision as to what to do in the situation or what attitude to take in the solution of the problem. Discussion followed on plans for putting the decision into effect in the life situation. In this plan, Biblical and other experience was studied historically in what was in fact a life- situation approach to secure perspective and emphasis for meeting the present situation (pp. 50-51).

While Elliott was a prolific writer, this single book may be viewed as a mature distillation of a lifetime's work, experience and reflection. In my view, it is one of the most elegant, engaging, and clear statements of Protestant religious educational theory of the twentieth century. The tone of the book is passionate, sometimes bordering on the polemical. Elliott believed in the essential value of his liberal perspective. Whether we agree or disagree with Elliott's understanding of the Reformation, of the process of critical thinking, or of the aim of Christian religious education, we cannot ignore him. Over a half-century after its publication, this book remains a classic of Protestant liberal religious education.