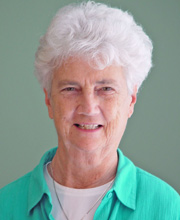 SR. CATHERINE DOOLEY, O.P., Ph.D. (1933-2015), an outstanding international leader in the field of catechesis, has consistently generated significant contributions to the mission of spreading the Gospel, including writing, publishing and teaching. “Kate”, as she is known, is a Sinsinawa (WI) Dominican Sister who has been professor of Catechetics and Liturgy at the Catholic University of America, Washington, DC. She is best recognized for developing a field called liturgical catechesis which acknowledges the liturgy as a source for cathechesis, a pastoral activity that aims to lead communities and individuals to full, active and conscious faith in the light of instruction and the experience of Christian living.

Catherine Agnes Dooley (Kate) was born and raised in Minnesota, was educated in the city of Faribault at Immaculate Conception Elementary School and Butler Academy High School. She became a member of the Congregation of the Dominican Order at Sinsinawa, Wisconsin. Some 50 years later Kate wrote in the newsletter of the Catholic University of America, Washington, DC: “It is in the Sinsinawa Congregation that I learned that teaching was a vocation and to be a teacher was a gift. So I began with 1st graders, and I loved teaching them just as I now love teaching university students. It might seem to be a great leap between those two levels, but there is an old adage: if you can teach 1st graders, you can teach anyone.”

And teach she did—at the elementary level of the congregation’s schools in Illinois, Wisconsin and Colorado. She was also giving religious education workshops for teachers in the Chicago area. In 1975 Kate was an invited presenter at a Religious Education Conference in Madison, Wisconsin. Her presentation was titled “Gospel Values: a Family Challenge.” She became a key figure in catechetical renewal after the Second Vatican Council.

“I remember coming in for my interview and people were very frank about what to expect and what not to expect. I wasn’t completely sold. When two faculty members took me out to lunch that day, I had to ask them, ‘Why do you stay?’ They didn’t hesitate for moment. They said, ‘The people.’” By the time lunch was over, the Dominican nun from Minnesota knew where she wanted to be. CUA buildings, salaries and class sizes have changed over the last two decades (when Sister Dooley first arrived, she typically taught 50 undergraduates per course), but for her, the good nature of the people has remained the same.

Kate’s ministry at Catholic University as teacher, author, innovator , publisher, and liturgist let to national recognition for her contributions to Catechetical Renewal. The following quotes are from the Beacon , the newsletter of the Sinsinawa Dominican Sisters:

1999: Kate Dooley, OP, associate professor of Religion at the Catholic University, Washington, D.C., has been given the Michael Mathis award by the University of Notre Dame. Sr. Kate was recognized for her faithful and consistent efforts to keep liturgy and catechesis in dialog and for her writings and teachings that shed light on both sacramental practice and sacramental understanding.

2001: The National Conference for Catechetical Leadership honored Catherine Dooley, OP with its annual award for her outstanding contribution to catechetics. Sr. Kate also gave the keynote address at the yearly NCCL meeting.

2005: The Georgetown Center for Liturgy honored Catherine Dooley, OP, with its annual “Award for Outstanding Contributions Made to the Liturgical Life of the American Church.” Sr. Catherine’s visionary and widely influential work in liturgy and catechetics were cited.

2005: The lead article in the November issue of New Theology Review is “To Be What We Celebrate: Engaging the process of Liturgical Catechesis” by Kate Dooley, OP. A noted voice in the field develops solid principals and a solid process to help parish catechetical and liturgical ministers to envision the task.

2005: The National Association of Parish Catechetical Directors presented the “Emmaus Award for Excellence in Catechesis”, to Kate Dooley, OP, an outstanding national leader in the field of catechesis who has consistently generated significant contributions to the mission of spreading the Gospel, including writing, publishing and teaching.

2006: Catherine Dooley, OP, has been promoted to full professor in the School of Theology and Religious Studies, Catholic University, Washington, DC. She is the second woman since 1888 to hold that position!

The Winter 2000 issue of THE LIVING LIGHT features an essay titled “Catholic Foremothers in American Catechesis.” The works of the “foremothers” cited there inspired and nurtured contemporary catechetical leaders. Today’s leaders include Catherine Dooley, described as “taking a cue from the General Directory for Catechesis (GDC), elaborates how the formation of Catechists should have a “catechetical style” (GDC, no. 241) whose point of culmination is not in theology or method but in a life of witness and mission.”

Addendum: SR. CATHERINE DOOLEY, O.P., passed away on December 1, 2015, at St. Dominic Villa. The funeral Mass was held in Queen of the Rosary Chapel at Sinsinawa December 7, 2015, followed by burial in the motherhouse cemetery.

Participant in the Field of Christian Education

To Listen and Tell: Introduction to the Lectionary for Masses with Children, with Commentary . By Kate Dooley, O.P.. Washington, D.C. :The Pastoral Press.

Sister Kate’s credentials are first rate. She explains the history, nature and structure of the lectionary and its intended uses, i.e. , Masses where a large number of children participate with Adults; Masses where the congregation is mainly children; separate liturgies of the word; sacramental celebrations; classroom or family prayer. She reminds us that the spiritual lives of children are no less real and serious than those of adults, and that children need to be nourished by the Bible proclaimed in words they can understand.

Liturgists and Catechists are often viewed as opposites of religious education, i.e. ritual versus creed. Here Kate Dooley cleverly presents a relationship which blends the two: a) as coexisting as in the RCIA process of mystagogy ; b) as partners as in a marriage ; c) as a mistaken belief of religious contradictions, a misnomer . This is a must read on a Dooley book list.

Preeminent religious educators explore major issues in religious education. Topics include: the question of revelation, the story of the human place in God’s creation, the mystery of the Eucharist, the reform of the sacrament of reconciliation, Jesus as catechist, evangelization and catechesis in official discourse, and formation in Christian spirituality for the next century.

Here Kate Dooley offers the meaning of “new evangelization” as the process whereby individual and social life is transformed in the light of the Gospel.” But she also offers the need for “re-evangelization…of the baptized who have lost a living sense of the faith”. This text of Dooley, first published fifteen years ago, is most valuable in interpreting the concepts of both new- and re-evangelization.