In our rapidly changing culture, African American pastors and leaders have a unique opportunity to be a voice of hope, healing, justice, wisdom, redemption and reconciliation to the broader church at large. The African American church has incredible potential to have a powerful transformative effect in rebuilding and renewing divided communities. Where can you find the mentoring and training you need to be a catalyst of transformation and reconciliation in your community? Talbot can help.

In this D.Min. track, Dr. Parnell M. Lovelace, Jr. will equip you with the tools and knowledge you will need to expand your ministry and influence in the African American church and beyond. Through an exploration of the biblical foundations, historical dimensions, socioeconomic realities, cultural influences and missiological principles unique to the African American experience, you will develop the skills to critically evaluate models of ministry and to develop intentional innovative practices to lead your church to accomplish its overall mission in your specific cultural context.

During your first year in the program, Dr. Lovelace will help you to explore the rich tradition of Black church spirituality. From its birth as a slave church to the present, the Black church has continued its development as a socially transformative movement. The African American church remains at the center of Black life in the United States and can contribute greatly to the spiritual, social and economic well-being of the Black community today.

During your second year, Dr. Lovelace will help you to develop a theology of African American leadership. You will explore the integral role of leadership in the Black community where the church leader is the catalyst of the community and change-agent within the culture. You will also look at examples of past leaders in the historic Black church who used their pulpits as a platform to the world, addressing the subjects of suffering, evil, justice, redemption and empowerment. This intensive will encourage you to draw from the rich theological and philosophical traditions that govern healthy discourse and activism within the context of the gospel.

During your third year, you will explore innovative methodologies of African American leadership. Dr. Lovelace will bring a missiological perspective to the role of the leader as reconciler, cultural communicator and facilitator of innovation and change. You will also learn how to navigate the challenges of leadership succession and transition. Models of community development and transformation will be explored, dissected and evaluated so that you can develop a theology of culture within their respective contexts. You will also examine and deconstruct the current political climate where we will focus on issues of race, culture, Christianity and the American nation, where the ministry of reconciliation will be affirmed. 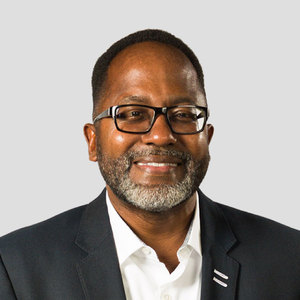 Dr. Parnell M. Lovelace, Jr. is the founding pastor of the Center of Praise Ministries of Sacramento, Calif., where he served for 25 years and it grew to over 3,000 prior to leading the congregation through a planned succession. Dr. Lovelace has served as the North American editor for the Great Commission Research Journal and has authored Set it Up: Planning a Healthy Pastoral Transition. He is a certified church consultant for Lovelace Leadership Connection as well as a noted blogger for LoganLeadership.com and the Biblical Leadership Blog. He was inducted into the prestigious Martin Luther King Jr. International Board of Preachers and Collegium Scholars at Morehouse College. He had an extensive career in social work and community engagement. He received his D.Min. from Talbot School of Theology and he is currently completing a Ph.D. in Intercultural Studies at Biola University’s Cook School of Intercultural Studies.

Dr. Gary McIntosh is Professor of Christian Ministry and Leadership at Talbot. He has served as a consultant for hundreds of churches in North America. Dr. McIntosh is also the founder and president of the Church Growth Network, which provides a wide range of professional consulting services in the areas of church growth analysis, strategic planning and generational change. He is the editor of the Growth Points newsletter. Having published over 100 articles and written over 16 books, he is a prolific writer and growth expert.

Efrem Smith is co-lead pastor at Bayside Church of Midtown in Sacramento, Calif. He previously served as President and CEO of World Impact, a Christian missions organization committed to church-planting in the inner city. He has authored multiple books including The Hip-Hop Church, Killing Us Softly and The Post-Black and Post-White Church. He is currently an adjunct professor and completing his doctoral studies at Fuller Seminary.

Dr. Doretha O’Quinn is a prolific national educator. She has served as Provost and Vice President for Academic Affairs at Vanguard University, Vice Provost of Multi-Ethnic and Cross-Cultural Engagement programs and Professor in Education at Biola University and Associate Dean for the School of Education at Point Loma University. She also developed and led the Institute for Urban Training at Azusa Pacific University.

Dr. William McDonald is dedicated to the teachings of Hebrew History and Jewish Studies as a means of providing a solid foundation for understand the Bible from its Hebraic roots. He is a former professor at the School of Theology and Missions at Oral Roberts University. He is a prolific author and a popular speaker.

Dr. Katrina Greene directs the international development minor and emphasis/concentration within the Cook School of Intercultural Studies at Biola University. She is a socio-cultural and applied anthropologist who has conducted ongoing field research among women, including female entrepreneurs, in the black townships of Cape Town, South Africa, since 1997, including doctoral research as a Fulbright Scholar.

Dr. Walter Augustine is the Director of Intercultural Education and Research at Biola University and an Adjunct Lecturer at Talbot School of Theology. He previously served as the Director of M.A.L.E.S. (Mentoring for the Achievement of Leadership, Education and Service) Initiatives and Multi-Ethnic Church Relations at Biola. With nearly 30 years of ministry to men, Walter’s passion is discipling and developing the people of God to maturity in their relationship with Christ and their ministry for Christ.

Dr. James Noble is Assistant Professor of Pastoral Ministry at Anderson University in Anderson, S.C. He teaches courses in the area of preaching, ministry, leadership and biblical worldview. He is also the esteemed pastor of Mountain Spring Baptist Church, Anderson, S.C.

Dr. Monte Norwood, a second-generation minister, is a recognized scholar and orator regarding African-American history and theology. His many honors include being selected as a “Benjamin E. Mays Fellow” by The Fund for Theological Education. In 1994, he became one of the youngest ministers in history to earn the Doctor of Ministry degree from the United Theological Seminary with a focus on proclamation, church planting and church growth.

Donald Gordon specializes in mentoring processes. He is cofounder of Iron Sharpens Iron, an all-black male affinity group at the Student Enrichment and Intercultural Development program at Biola University. He serves as the Associate Director of Financial Aid and Customer Service at Biola University.