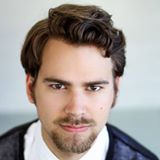 My experiences at Biola - especially those with applied faculty - helped me solidify the connection and intersection that is present between my craft as a musician, and my identity as a child of God. As I return to join the applied voice faculty, I hope that I can help my students identify the same crucial intersection that has informed my own musical preparation and performance.

"Joel Balzun regaled us with one of the best star turns of the day as Ravel’s Clock. Wedding uninhibited, goofy stage business to his ringing, imposing baritone, Mr. Balzun served notice that at this moment, the stage was his." — James Sohre, Opera Today, January 2020

"Most impressive among the evening’s young artists was baritone Joel Balzun, an already mature artist with a voluminous sound that he had always under control, capable of scaling down and coloring the words for the meaning and emotive purposes." — Robert Croan, Pittsburgh Post-Gazette, July 2018

“As De Rocher, the baritone Joel Balzun was the portrait of the slovenly, scary Death Row inmate, with shackles, tattoos and an exposed undershirt. With a stentorian voice, he managed his character’s transformation from the face of criminal menace glaring from the newspaper photos to a portrait of raw humanity, filled with fear, guilt and a wisp of hope that something could transform his life this late in the game.” — David Fleshler, South Florida Classical Review, July 2017

“... Joel Balzun, was the winner of the NBO’s first Galaxie Rising Star Composers’ Competition for composers [under] on 35 with Miracle Ten-Zero-Two-Five-One, a very sophisticated piece...it’s clear that the state of new composition in Canada is healthy.” — Lloyd Dykk, straight.com (Vancouver, BC), November 2010

“...the Balzun work displays an impressive mastery of orchestral writing that reminds you of Hollywood epic (a la Exodus)-meets-Mahler, especially in the big play on the major-minor treatment that Balzun accords his own variant on Frere Jacques for the bulk of the piece. Ending on a jubilant note, A Missing Generation struck an obvious positive chord with many of the younger members of the audience - as well it should, given the buildup of excitement that came through in the writing and the CPO realization of it. Clearly, a composer to watch.” — Bob Clark, Calgary Herald, May 2010