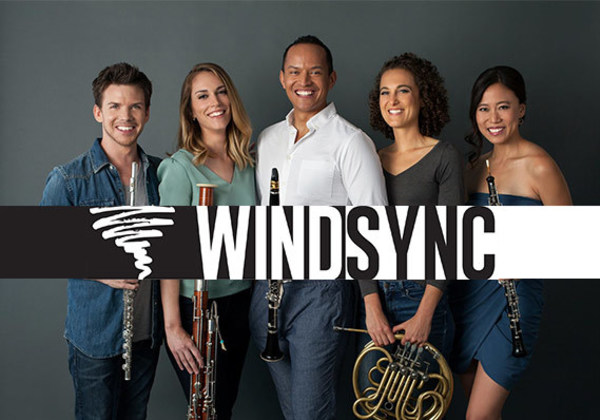 WindSync is a collective of five outstanding North American wind musicians who come together as performers, educators, and community-builders. WindSync concerts are intimate, joyful, and thoughtfully programmed with people and places in mind. The quintet eliminates the "fourth wall" by performing from memory, connecting quickly and memorably with audiences. Recent winners of the Concert Artists Guild and Fischoff competitions, they approach their mixed repertory of wind quintets and arrangements with the highest level of artistic dedication.

WindSync has appeared in recital at the Met Museum, Schubert Club, Shanghai Oriental Arts Center, and Weill Recital Hall at Carnegie Hall. In 2015, WindSync was invited by the Library of Congress to perform the world premiere of Paul Lansky's "The Long and the Short of it", commissioned by the Carolyn Royall Just Fund and the Chamber Music Society of Lincoln Center. Their 2018-2019 season includes performances at the New School, Ravinia, and the Hobby Center, and premieres by composers Ivan Trevino, John Steinmetz, and Marc Mellits.

WindSync takes a special interest in reaching children, families, and underserved audiences. Part of the burgeoning creative placemaking movement, the ensemble has recently focused on performance in public spaces in Houston and in Opelousas, LA. They have been featured in educational concerts presented by the Seattle Symphony, Midland Symphony, and Orli Shaham's "Baby Got Bach", and their concerts for young people reach over 10,000 students per year.

Advocates of 21st century musicianship models, the members of WindSync have led master classes at New World Symphony, Texas Music Festival, and the University of Maryland Renegade Series, among others. WindSync has also served as ensemble-in-residence for Adelphi University, the Chamber Music Festival of Lexington (KY), and the Grand Teton Music Festival.