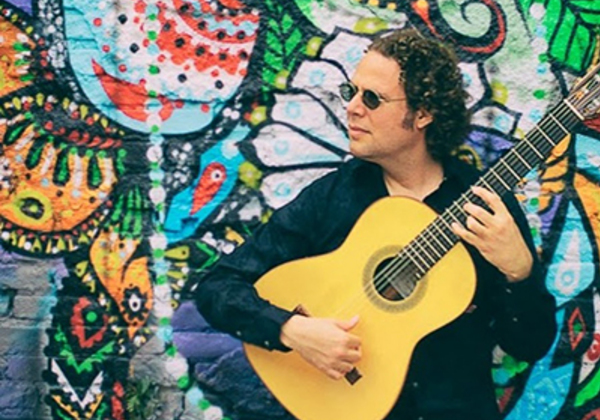 Flamenco guitarist Adam del Monte, considered “One of the leading flamenco and classical guitarist/composers of his generation” by Classical Guitar Magazine, will be our first guest artist for the Biola University 2016-17 Spring Concert Series. He transcends labeling and convention as a performer and composer in both flamenco and classical guitar. Del Monte incorporates a wide array of musical styles in his compositions, creating a unique flamenco sound and language, steeped in tradition yet progressive in its openness to musical flavors from around the world.

His studies of flamenco and classical guitar began with his father, progressing to study with such famed Gypsy performers as Pepe “Habichuela,” Paco Cortez, Niño Miguel and Gerardo Nuñez. His classical guitar teachers were Menashe Baquiche, Israel and Gordon Crosskey at Chethams School of Music and at the Royal Northern College of Music, Manchester, England.


He has appeared as both a solo artist and group performer in major venues such as L.A.’s Mark Taper Forum, Walt Disney Concert Hall and the Wilshire Theater in Los Angeles, the Teatro Real and the Conde Duque in Madrid, Manuel de Falla Auditorium in Granada, New Mexico St. Francis Auditorium in Santa Fe, the International Guitar Festival in Israel and the 500th anniversary of Columbus celebrations in Paris and Madrid.


Del Monte recently completed “Passages,” his second flamenco guitar concerto which was debuted and commissioned by the Santa Monica Symphony. His first flamenco guitar concerto for guitar and orchestra, “Ensueño Flamenco,” was premiered in Boston by the Boston Modern Orchestra Project. In 2015, he finished composing a flamenco opera, called “Llantos,” which represents his continued integration of the two worlds of flamenco and classical music.


Adding to his credit of several recordings, his latest endeavor is a new guitar duo called “Due Deloro” with young Slovenian guitarist Mak Grgic. It includes traditional Spanish romantic composers like Granados, alongside edgy Ginastera, popular Argentinian tangos as well as del Monte’s own flamenco compositions arranged for two guitars.

In addition to his performance schedule, del Monte is an adjunct professor at the Thornton School of Music at University of Southern California.