Warfare in the Ancient Near East and the Old Testament 4: Pictures From Friends

My forthcoming book on warfare in the Ancient Near East and the Old Testament not only has many words (see an overview in a previous post), but also about 150 pictures. While ancient Near Eastern texts are somewhat familiar, visual imagery remains unknown for the most part. This is partly due to the difficulties of acquiring permission to print the pictures. Some pictures I was required to buy directly from museums or professional photographers (and so I will not be able to post these pictures online). However, I was also able to acquire pictures for free from three other sources. First, I will show some pictures that were taken by friends.

First, Ken Way, my fellow professor at Talbot, spent a few days in Istanbul recently and took some pictures at the Istanbul Museum of Archaeology for me. You can see below a picture of a neo-Hittite chariot in the early part of the first millennium, showing clearly the bow as the main weapon of the chariot. Although reliefs like this often depict the chariot running over the enemy, this was probably a rhetorical flourish. Also below you can see a picture of an archer from the same time frame. These pictures can give us some sense of what chariots and archers would have looked like in the books of Samuel and Kings. 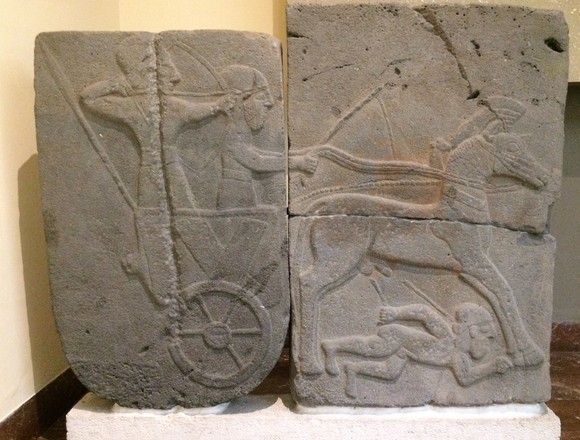 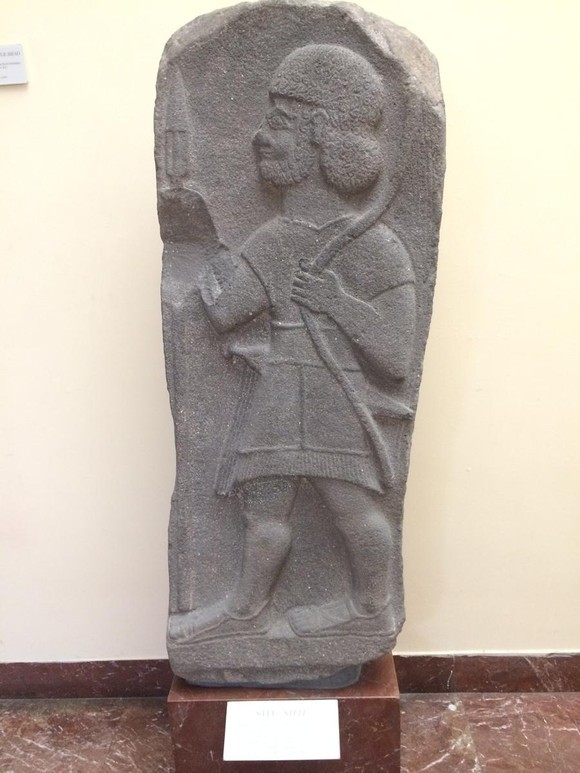 Second, one of Biola’s Bible majors, Hannah Grady, was able to take pictures at the British Museum in London (with the help of her sister Faith). Not only does the British Museum have one of the best collections of material from the ancient Near East on display, but a large portion of their collection (both on and off display) are available for viewing on the internet. Hannah’s pictures focused mostly on Assyrian reliefs from Ashurnasirpal II and Tiglath-pileser. Highlights included a relief of Ashurnasirpal II shooting the enemy with a bow, while the divine warrior Ashur is depicted floating above him in a disk in exactly the same pose as the king, signifying that everything the king does is equivalent to the action of the god (BM 124540). A relief of Assyrian soldiers crossing a mountain (BM 124558) shows the viewer the importance the Assyrians attached to conquering not only the enemy but also difficult terrain. 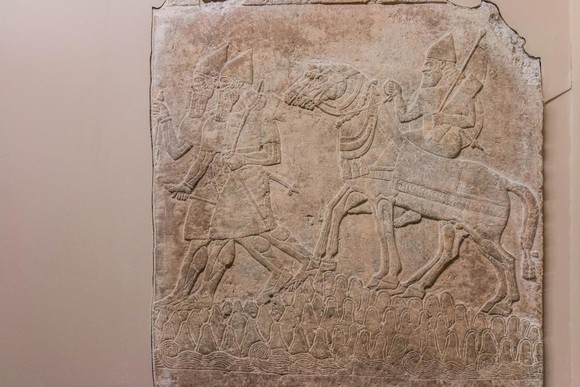 The Assyrian developed a powerful cavalry force in the early first millennium, as seen in another relief (BM 118907). They were also famous for including sickening scenes in their reliefs (as exemplified by the birds in the same relief carrying off the entrails of dead enemy soldiers) designed to frighten their enemies into surrendering rather than fighting. The Assyrians also sometimes engaged in godnapping: taking the divine statues of their enemies after battle, as seen in the next relief (BM 118934). However, they never engaged in “my god beat up your god” rhetoric, but argued that the gods of their enemies had abandoned them and decided to bless the Assyrians now. The Assyrians also kept detailed records of plunder, as seen by another relief that shows Assyrian scribes making notes after a battle (BM 118882). 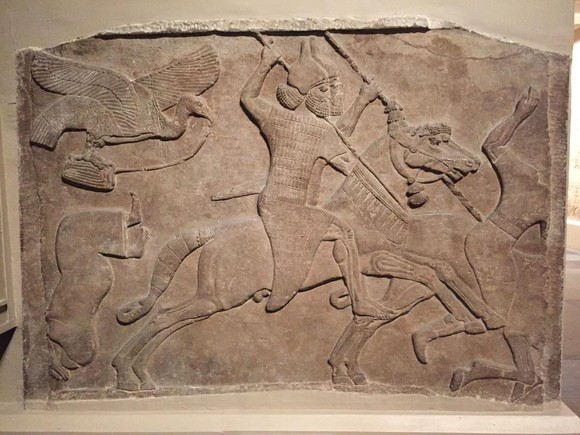 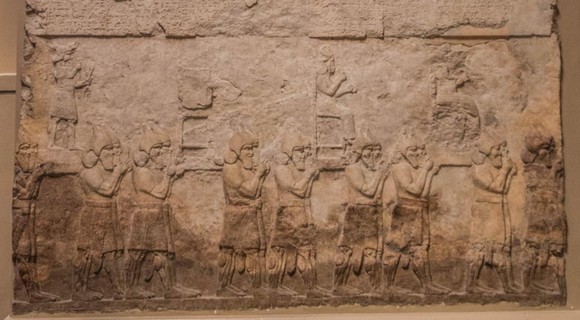 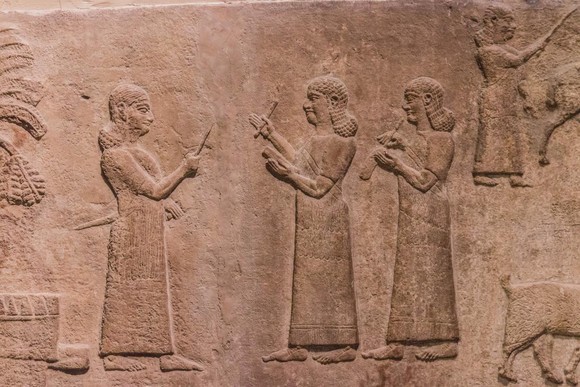 One of the most famous Assyrian reliefs is Sennacherib’s attack on the Judean city of Lachish (a battle also recorded in 2 Kings 18); one small portion of it included below shows the Assyrian slingers attacking the city (BM 124775). Slings in the ancient Near East were not modern slingshots, but used slingstones that were 2.5 inches in diameter that could travel very quickly towards their enemies. This picture perhaps gives us a glimpse of David in his battle against Goliath. We will end with some actual weapons and armor. The helmet is Assyrian from the first millennium (BM 22496), while the two short swords are from late second millennium Babylon (BM 123060 on the left and 123061 on the right). 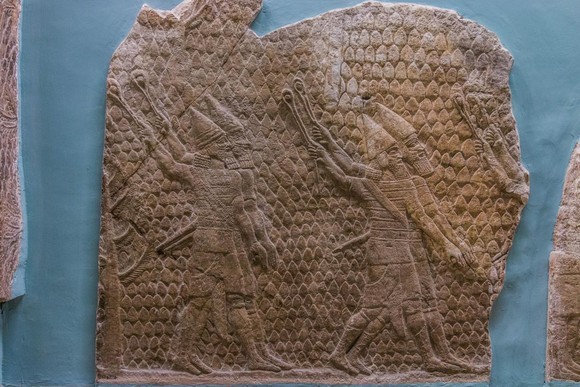 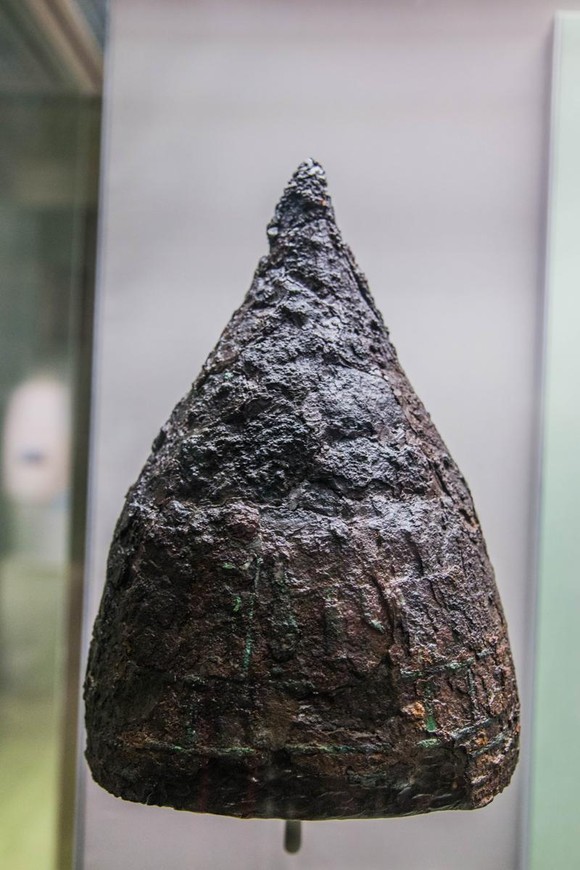 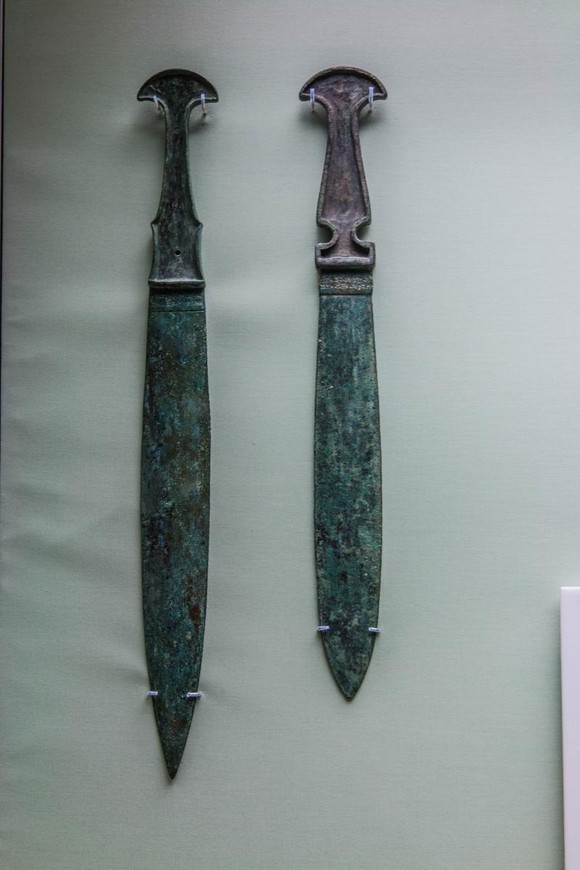 My thanks to Ken and Hannah for their help with these pictures!