A Psalm for South Korea

Being invited to grieve alongside the bereaved is one of life’s highest but least acknowledged honors. I remember one winter during my father’s terminal battle with bone-crushing cancer he, the parson, stood alone by an open grave and conducted a funeral for an elderly woman who had no mourners. Cemetery diggers waited in the background for his eulogy to finish before they began their shoveling. He told me how privileged he was to be the one remembering her.

Quiet grieving in the company of the bereft — neither providing answers nor hasty words about “being in a better place” — is among the highest and humblest ways we live out our Romans 12 calling to “weep with those who weep.” It’s even true when we comfort the profoundly grief-stricken who are complete strangers.

This is what I told 35 Biola Chorale students as we rode through the night’s rain toward Jindo Island on Monday, April 28, 2014.

The tip of South Korea’s Jindo Island points toward the Yellow Sea. Since a few days before Easter, it’s also pointed toward the place, 12 miles out, where the Sewol Ferry became the crypt of nearly 300 teenagers, most still wearing life jackets. They were entombed in the ferry’s lower levels, obeying the crew’s orders to stay put as the massive ship listed and took on water and sunk. Forty-eight children were discovered in one room. By the time our bus arrived that damp and mournful night, more than 100 teenagers’ bodies remained unfound. Someone told me 54 of these were Christians. We came to be present with some of these families.

Our weeklong trip through Korea had been rerouted suddenly as the invitation came to be present with these families who were hoping the remains would be found of their sons and daughters.

“We are only a short distance from what is perhaps the world’s epicenter of grief,” I told the bus filled with Biola Chorale students wearing black formal attire and sitting somberly in their seats.

Lindsey was across the aisle from me praying and weeping. I heard voices of intercession, some quiet and some pleading, as the bus pressed through the rain and along the winding road toward the camp of tents on Jindo Island. One began to sing, “When peace like a river attendeth my way, when sorrows like sea billows roll….” The three dozen other voices joined.

The police barricade moved for the bus to enter the restricted zone. We knew as we gathered our umbrellas and raincoats that we had entered a place of profound grief, incomprehensible to any of us. It was also a sanctuary, and reverence would be our posture. Out of respect, students took off their jewelry and left phones on their seats. We agreed to walk the half-mile of puddled road in silence. We passed a woman in despair, crying alone. The orange-vested officials on either side of the road spoke in hushed tones. The Korea Crime Scene Investigation truck was powered into humming generators. The tents we passed held huddled families and rescue team coordinators and television crews and phone lines and cafeterias and perhaps even the makeshift morgues.

We were Christians from a university in Southern California walking voiceless, single file in the dark night’s rain, to an awaiting gathering of despairing Korean Christians. We shared no language link. No common friends. We simply shared the cross. As I walked near the front of the line, I knew we were given the gift of mourning alongside those who we did not know and whose heartache was beyond our comprehension. I knew this would be one of my life’s great honors.

The tent was full, well lit and filled with folks standing and sitting. Someone tacked a Salvation Army banner across the canvas wall. We crowded into the tent to the a capella Korean mourners already singing in hope a hymn. The Biola students’ formalwear gave a dignity to the moment, as the mothers and fathers and siblings who gathered were dressed in clothes they had perhaps worn for days. Rain ponchos and rubber boots and, strangely but fittingly, an FDNY baseball cap. 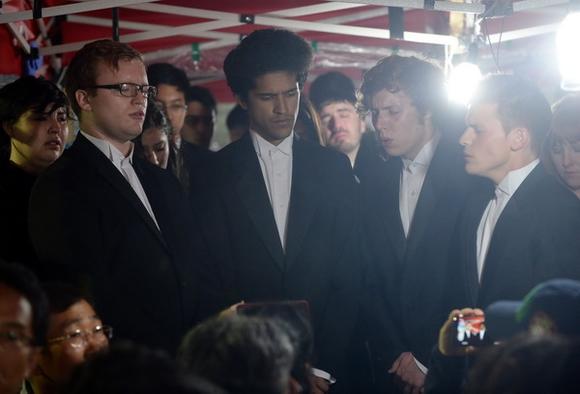 Biola was introduced, though the chorale members’ heads stayed tilted downward. I prayed. It was a prayer with words from the Psalm soon sung, fearing no evil when the valley of death is deep. It was a prayer for the fathers listening in despair, whose bodies were tired, who have wept bitterly. A prayer for the mothers waiting to hold the bodies of the children they bore a short 15 or 16 years ago. A prayer for the siblings whose lifelong pain is just beginning, pain most of us cannot understand.

We did not come to offer answers, and I told them so. We came to offer our present of presence. We came to tell them that the months of planning for our travels to Korea may simply have been to stand with them that cold and rainy night. Interspersed in my prayer I petitioned, “Lord have mercy, Christ have mercy.” The sound of waves, one after another, splashed against the seawall beside us. 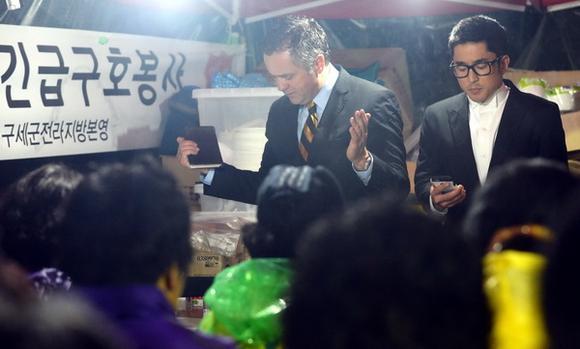 Two months earlier, choral director Shawna Stewart chose the 23rd Psalm as one of the chorale arrangements the singers would learn in Korean. Little did they know over their countless practices that song was intended for a rainy night on Jindo Island. With one motion, Dr. Stewart lifted and lowered her hands to prompt the first words. I stood 20 feet away from the vocalists and watched tearfully as they offered their gift of music as a gift from the Spirit. Both music and pneuma comingled through the refrain of the Psalm. With no accompaniment and at the pace of a dirge, the 35 students sang, “Even though I walk through the darkest valley, I will fear no evil, for you are with me.”

After the Psalm’s “alleluia amen,” four men in four parts stepped forward, slowly singing, “Some glad morning when this life is o’er, I’ll fly away.”

The chorale finished. The waves kept splashing on the seawall.

A rural pastor preached a brief sermon to congregants staring down or out toward nothing at all, their “amens” following certain words of spiritual connection. After he finished speaking, silence ensued until the chorale quietly sang the Doxology, praising God from whom all blessings flow.

Just as we had come, we began our silent walk back to the bus, which had earlier become our prayer room.

Below is a video created by the Far East Broadcasting Company about our visit to Jindo Island: