The Secret to Becoming Irrelevant: Spend All Your Time Trying to Be Relevant

The Peace and Love Hippie Hostel is one of Paris’ most budget-friendly, a dingy sanctuary for under-showered backpackers. It was there that I met Derrick. Derrick didn’t believe in organized religion. Derrick didn’t believe in unorganized religion. Derrick believed in Marijuana, and that Marijuana alone gave life meaning. One factor that drove Derrick to find meaning in chemicals rather than Christ was, quite frankly, Christ’s people—the church. In Derrick’s own words, “Whatever the world can do, Christians can do ten years later and worse.” He went on to cite Christian music, movies, literature, and church trends that struck him as derivative, contrived, inauthentic, shallow, and kitsch. The big irony was how so many of these Christian endeavors were aimed precisely at being relevant to guys like Derrick. The harder the church tried to be relevant, the more irrelevant she became.

Behind this irony lies a question that is both good and dangerous. It is what we may call the “Relevance Question,” which asks: What would it look like for us, as believers, to be relevant to unbelievers? We don’t want the Derricks of the world to see us as a quirky tribe of xenophobes. So in answering the Relevance Question we usually come up with a projection of what we think those unbelievers out there are like. Once we think we’ve got a good grip on the tastes and preferences of our unbelieving target demographic, we take the Relevance Question further: we reinvent how we do Christianity so that what we’re selling coincides with what they’re buying. As perceived demand shapes what we supply, innovative church models begin to emerge. We make Jesus relevant again.

Not according to Derrick and the many like him. With the Relevance Question as the first step in our journey, our final destination is irrelevance. Sure the Relevance Question has its place (e.g., Paul didn’t speak Hebrew on Mars Hill or cite the Stoic philosophers in the synagogues). The Relevance Question is a good question; it is just not to be the first question. When relevance is our first priority we end up powered not by the Spirit of Christ, but the spirit of the age. There is a more fundamental question we must face squarely together. Before asking what relevance looks like to this or that culture (or subculture), we must first ask “Who is the Jesus we exist to reverently worship and reflect with our lives?” Let us call this the “Reverence Question.”

I briefly highlight four effects of putting the Relevance Question ahead of the Reverence question:

1. We alienate anyone who doesn’t fit the bill. If we start with a drive to be relevant to postmoderns, then we become instantly irrelevant to anyone who still puts faith in science, still values logical propositions, or holds out hope for objective truth. If we assume that postmodernism is in the oval office of ideas in Western culture (and that’s debatable), there are still protesters in the streets who voted for the other guy. Don’t all these people need the Gospel too?

2. We play a never-ending game of follow the leader. Like every other “ism” created by human minds, postmodernism’s days are numbered. One day the polls will come in and some new “ism” will be sworn into office—post-postmodernism. Eventually we will realize that our postmodern church is yesterday’s news, ask the Relevance Question all over again, and dream up a post-postmodern church. In this train-of-thought, the church has made herself the caboose, always trailing distantly behind culture. What’s even more of a problem is that culture itself has become the engine, pulling the church caboose along. Shouldn’t Jesus be our engine, and His Word the tracks we follow into the future?

3. We present a torn portrait of Jesus to the world. Postmoderns, so we are told, value the image over the word, mystery over certainty, questions over answers, the relational over the rational. So the relevance-driven church follows suit. If post-postmodernism one day swings the pendulum back toward reason and objectivity, then what happens to the relevance-driven church? She packs her candles and icons in storage, swaps out story-telling time with serious study time, and replaces open questions with closed answers. Yet Christ is simultaneously relational and rational. He used words and images, mysteries and certainties, questions and answers. When we begin with the Relevance Question, we allow cultural trends to determine which few aspects of our multidimensional Christ the church expresses. Shouldn’t we be displaying a wider spectrum of Jesus’ radiance to the watching world?

4. We lose sight of the chief end of everything. The chief end not only of man, but of everything—waterfalls, education, subatomic particles, romance, art, science, food, sleep, golfing, mountains, humor, tears, etc.— is to glorify God. Driven by the conviction that “the aim and final end of all music is none other than the glory of God” Johann Sebastian Bach created some of the most original, powerful, and beautiful music ever composed. Imagine, however, if he saw the “aim and final end of all music” as being relevant to a culture that likes music. What if the primary factor determining where Bach’s dots fell on the score sheet was not glorifying an infinite God, but merely making something that people would like? Do you think that his music would have been as powerful? Me neither. There is a profound difference between the art motivated by adoration for God and that motivated by the approval of people. Shouldn’t worship be the deepest motive behind every thought we think, word we speak, and sound we make?

In sum: live a life of authentic reverence for Jesus and you become relevant to the watching world. Live your life to become relevant and you become both irreverent to Jesus and irrelevant to the watching world. Let me say again, the Relevance Question is a good question, it is just not to be the first question. Before we ruminate on how to reach seekers, we must focus on how to revere the Great Seeker, the God who seeks worshippers who worship Him in spirit and in truth (John 4:23). You exist “to the praise of His glory” (Eph. 1:12b, 14b), “so that the name of our Lord Jesus may be glorified in you” (2 Thes. 1:12a), that your life and mine would shout together Paul’s anthem “to Him be glory forever” (Rom. 11:36b)! 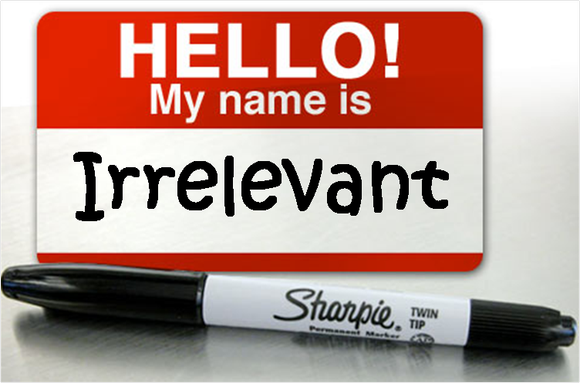