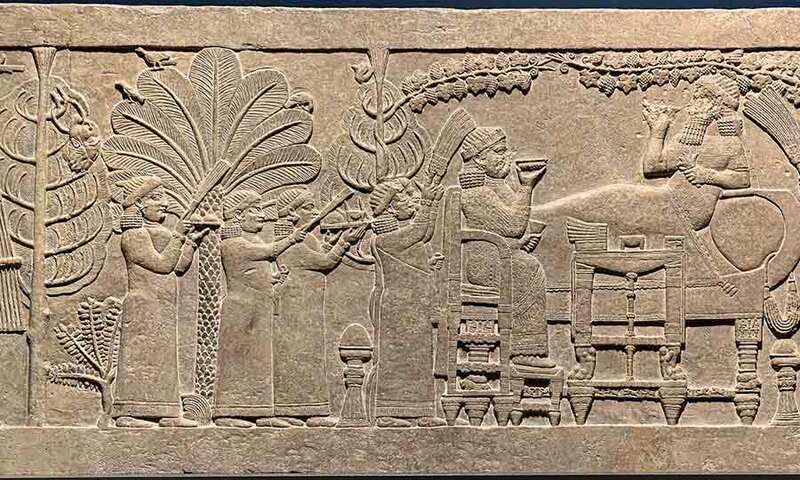 On this day three years ago, I blogged about Psalm 23 from the perspective of ancient Near Eastern studies and my personal battle with the enemy of cancer. My augmented comments today are offered as a second pass over this familiar psalm as all kinds of “enemies” remain in my plain sight in this broken world. As I continue reflecting on Psalm 23 from the vantage point of remission and as my Royal Shepherd continues refreshing me (vv. 1-3), I appreciate both how God provides for me “in full view of my enemies” (NJPS) and that God’s comforting presence is the reason to “not fear harm” or even death in the “valley” (vv. 4-6). Specifically, I want to expand on two aspects of Psalm 23: the ancient Near Eastern background of royal meals and the literary structure which centers on God’s presence.

First, the Shepherd-King sustains us on life’s journey as he prepares our tables, anoints our heads, and overfills our cups (v. 5). When we consider royal feasting and royal provisions in the ancient Near Eastern cognitive environment, we can appreciate the poignant imagery in this psalm. In the palace relief showing Ashurbanipal’s feast (see above), we see the Neo-Assyrian king and queen enjoying food and drink — with extravagant service! — after defeating their political enemy whose severed head hangs upside down from a distant pine tree (see flipped detail) [1].

Janling Fu explains: “The close relationship between war and peace, victory and post-victory banquet — essentially the association of the banquet with judgment — is repeatedly seen in these episodes and further reflected in the Hebrew Bible. A motif of judgment appears prominently with the idea of a king with a cup” [2]. This aids our understanding of Psalm 23:5 where the divine King ironically serves, oils, and blesses the psalmist (or us, as we identify with the psalmist) with royal refreshments in view of his (or our) disempowered enemies [3].

In a study on Old Babylonian and Neo-Assyrian texts in For Us, but Not to Us, we also learn illuminating background about royal rations issued to troops on life-threatening missions [4]. Adam Miglio proposes that “Psalm 23:5a … employs imagery taken from the Near Eastern practice in which kings furnished foodstuffs to their dependents ‘on the road,’” and he considers “how such royal provisions were meals of symbolic significance that not only served to sponsor palace dependents but also to broadcast royal largess” [5]. Using these well-known cultural images from ancient royal patronage, Psalm 23:6 tangibly reminds us how God’s ṭôv and ḥesed (“goodness/order” and “loyalty”) pursue us in all kinds of hostile environments where our lives or livelihoods are threatened. Time after time, we personally receive God’s gracious provisions — sometimes magnanimous public displays — despite the persistent “enemies” of disabling injuries, wasting diseases and encroaching death. Through it all and to the end, the Shepherd-King remains our good and loyal Caregiver [6].

Second, God’s presence is the main subject of this Psalm. “For you are with me” (kî-’attâ ‘immadî) is the reason why “I will not fear” in v. 4. As mentioned in my previous post, this God-with-us revelation is at the literary center of the psalm. We know this by grammatical shift: God is in third person in vv. 1-4a, and God is in second person in vv. 4b-6. We also know this by word-count in the Hebrew text: the central pivot is the conjunction kî, “for/because” (kî is the twenty-ninth out of the fifty-seven total words in Psalm 23) [7]. Furthermore, we observe that the divine name YHWH, which stands for God’s presence, encases the psalm in a figurative frame known as inclusio: YHWH is found in vv. 1 and 6 (occurring as the third word from the beginning and as the third word from the end in the Hebrew text). Because God is positioned prominently at both the center and the periphery of Psalm 23 (see table), we can perceive that God is preeminent everywhere in our dependent lives (cf. Col 1:15-20) [8].

The “with me” affirmation in v. 4 orients us as sheep in God’s pasture or as dependents in his kingdom. Kenneth Bailey, who recognizes the YHWH-framework and the turning-point of the psalm, explains that “Sheep have a special problem. They have no defenses … The sheep’s only security is the shepherd” [9]. The Shepherd’s presence will either protect us from possible harm and death or encourage us to trust God through inevitable harm and death. God himself is the Sovereign Resource who leads us (vv. 1-3) [10], comforts us (v. 4), hosts us (v. 5), and pursues us so that we can enjoy the blessed hope of returning to (or dwelling with) him for long days (v. 6).

[3] For this reversal as it relates to anointing, see Othmar Keel, The Symbolism of the Biblical World: Ancient Near Eastern Iconography and the Book of Psalms (Winona Lake: Eisenbrauns, 1997) 275.

[6] For “Yahweh as a magnanimous host” and hospitality’s entailments for well-being, eating and drinking, anointing, guidance, escort, protection, and reputation, see Keel, Symbolism, 195-198, 335.

[7] My word-count analysis yields the same result as Fokkelman’s poetic analysis in which kî-’attâ ‘immadî is the tenth colon out of twenty total cola in Psalm 23; cf. J. P. Fokkelman, The Psalms in Form: The Hebrew Psalter in its Poetic Shape (Leiden: Deo Publishing, 2002) 34.