Scripture is for us, but not to us 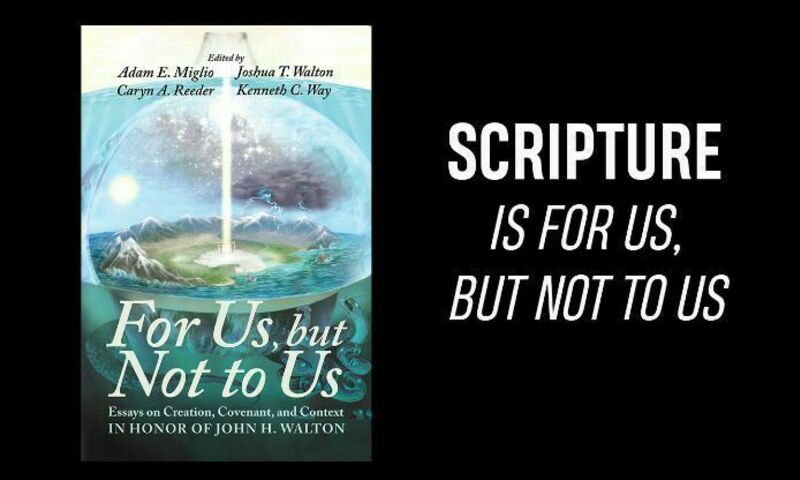 I want to announce the recent publication of a collection of essays in honor of the highly esteemed Bible professor, John H. Walton. The title is For Us, but Not to Us: Essays on Creation, Covenant, and Context in Honor of John H. Walton (Eugene: Pickwick, 2020), edited by Adam E. Miglio, Caryn A. Reeder, Joshua T. Walton, and Kenneth C. Way.

The table of contents features 24 essays, grouped under the themes of creation, covenant and context. The contributors include Biola and Talbot faculty members, like Carmen Joy Imes, Ryan S. Peterson, Charlie Trimm (see his blog post on divine weapons), and myself, Kenneth C. Way.

The following excerpt is called “A Tribute to John H. Walton” (pp. xvii-xx) and it explains the title, themes and rationale for the honorary volume. It also offers a description of the honoree’s method for background/comparative studies, using terms like cognitive environment criticism, lost world and cultural river.

“For us, but not to us” succinctly captures John H. Walton’s approach to Scripture. The phrase places value on both contemporary and ancient contexts of the biblical text, and it also reminds contemporary readers that they are not the implied audience of the human authors or editors. Walton’s vocational calling centers on training biblical interpreters to put aside their own cultural presuppositions in order to comprehend the ancient world of the text to the best of their ability by using all of the resources at their disposal — whether historical, archaeological, cultural, literary, or linguistic.

This hermeneutic, recently termed “cognitive environment criticism,”[1] is implicit in Walton’s earlier publications, such as Ancient Israelite Literature in its Cultural Context (1989) and The IVP Bible Background Commentary: Old Testament (2000). However, the phrase “for us, but not to us” does not appear in print, as far as we can tell, until 2008 when it is found in the final sentence of his article, fittingly titled, “Interpreting the Bible as an Ancient Near Eastern Document” (based on a paper presented in January 2004).[2] The phrase (and several variations) subsequently appears throughout Walton’s Lost World volumes and in his Old Testament Theology for Christians: From Ancient Context to Enduring Belief (2017).

The phrase “for us” echoes the Apostle Paul’s frequent reminder that the Hebrew Scriptures are “for us,” that is, “for our sake” or “for our instruction” (see Rom 4:24; 1 Cor 9:10; cf. Rom 15:4; 1 Cor 10:6, 11). The “us/our” in these texts refers to the church, to whom Walton’s publications are primarily directed. While he engages with the wider academy, he usually writes for Christians, particularly evangelical Christians, so that they can effectively interpret progressive revelation by employing a “christotelic” approach to the Old Testament.[3]

Yet while Scripture is “for us,” it is “not to us”; it is ancient people’s mail, so to speak. Christians must stay cognizant of the fact that God’s self-revelation is culturally embedded. For this reason, it is essential to develop the skills of a “cultural broker”[4] when engaging Scripture. As Walton explains, “[I]f we are to interpret Scripture so as to receive the full impact of God’s authoritative message, we have to set our cultural river aside and try to understand the cultural river of the ancient people to whom the text was addressed. The Bible was written to the people of ancient Israel in the language of ancient Israel; therefore, its message operates according to the logic of ancient Israel.”[5] In other words, “we cannot seek to construe their world in our terms.”[6]

Our subtitle for this honorary volume, Essays on Creation, Covenant, and Context, is designed to capture Walton’s primary research trajectories and to serve as rallying topics for our various contributors. Although “charts” might be added to this series of words, in light of Walton’s now famous Chronological and Background Charts of the Old Testament (1978, 1994), we have contented ourselves with offering only occasional supplementary tables in some of our peer-reviewed essays. Walton is probably best known for his fresh perspectives on “creation” and cosmology (see NIV Application Commentary: Genesis; Lost World of Genesis One; Genesis 1 as Ancient Cosmology), but “covenant” is an equally important theme in Walton’s groundbreaking work (see Covenant: God’s Purpose, God’s Plan; Lost World of the Israelite Conquest; Old Testament Theology for Christians; Lost World of the Torah). We are using “context” intentionally as a broad term in order to accommodate various essays that employ aspects of Walton’s interpretive methods (described above), especially those engaging additional c-words like culture, cultural river, comparative studies, cognitive environment or even children’s curricula.

Our richly diverse group of contributors reflect Walton’s influence on theologians, archaeologists, historians and New Testament scholars in addition to scholars of the Hebrew Bible and the ancient Near East (with its many sub-disciplines). During his two decades of teaching at Moody Bible Institute (1981–2001) and another two decades of teaching at Wheaton College (2001–present), Walton has inspired many undergraduate and graduate women and men to pursue careers in biblical and related studies. Walton significantly influenced all of the contributors to this volume, whether they studied in his classroom, worked as his research assistants, explored the Holy Land with him or even grew up in his home. Over the last twenty years, these contributors have also come to know one another through the annual SBL breakfasts that Walton has hosted for his ever-growing number of students and students-now-colleagues from across the world. May Walton’s tribe continue to increase!

We are all deeply grateful to John H. Walton for his generous investments in our lives. None of us would be who we are or where we are today without his gifts of time, encouragement, inspiring teaching and mentorship. Many of us are also beneficiaries of John and Kim’s nurturing hospitality and supportive presence at various milestones of our lives. Somewhat like the Bible, the Waltons have been there “for us,” but this collection of academic essays is “not to us.” It is a Festschrift (“commemorative publication”), and we offer it as a tribute to John H. Walton, to honor him in recognition of forty years of loyal service to God and the church.

[2] In Block, ed., Israel: Ancient Kingdom or Late Invention?, 327. The full quote: “Comparative study does not impose something foreign upon the text; rather it seeks to rediscover that which is intrinsic to the text. This dimension may not be taken for granted, because in many ways we are foreign to the text, for the Bible was written for us but not to us” (Walton’s italics).

[3] See Walton, Old Testament Theology for Christians, 5­­­­–6, 22. For an example of christotelic interpretation, see Walton’s discussion of the first four commandments in “Interpreting the Bible as an Ancient Near Eastern Document,” in Block, ed., Israel: Ancient Kingdom or Late Invention?, 324–25.