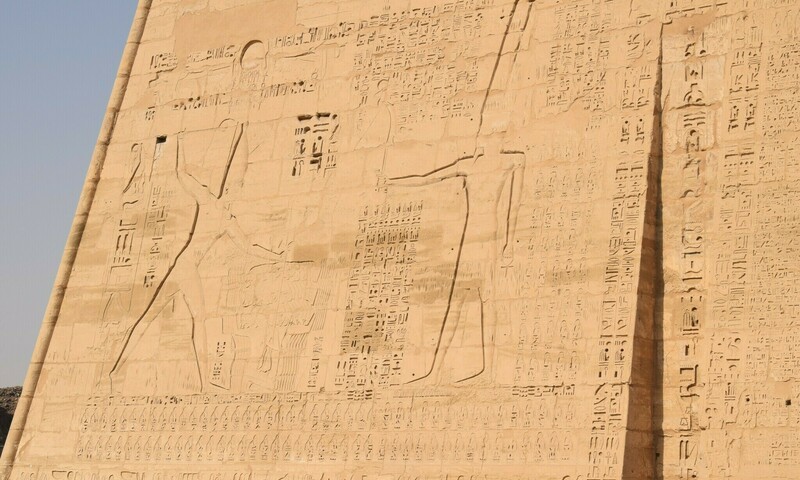 Last year my colleague Ken Way and I had the chance to tour Egypt and see the many impressive remains from Pharaonic times that still awe visitors. One scene we saw depicted in some of these reliefs involved a motif called a divine weapon: a god holding a weapon. Most often this weapon appears in scenes involving the Pharaoh smiting an enemy prisoner, such as the picture above from Medinet Habu, a temple of Ramses III. The idea behind this motif is that the god (Amun in the picture above) provides a divine weapon to the king in his battles, demonstrating the support of the gods for the king. This same motif appears in Mesopotamia, where literal weapons were sometimes designated as divine weapons and placed in temples or carried by the kings into battle. One Assyrian relief (picture below) depicts the Assyrian god Aššur hovering in the sky above the king riding in his chariot; strikingly, the king and the god hold the same weapon in identical poses, highlighting the correspondence between the two: whatever the king does, it is as if the god does it through him.

The Old Testament also has many references to divine weapons belonging to YHWH, the God of Israel. For example, Habakkuk provides a prominent example: “You stripped the sheath from your bow, calling for many arrows. Selah. You split the earth with rivers. The mountains saw you and writhed; the raging waters swept on; the deep gave forth its voice; it lifted its hands on high. The sun and moon stood still in their place at the light of your arrows as they sped, at the flash of your glittering spear” (Hab 3:9-11 ESV).

However, significant differences remain between YHWH and the gods of the ancient Near East in the area of divine weapons. This research was for a festschrift to honor the work of John Walton entitled For Us, but Not to Us: Essays on Creation, Covenant, and Context in Honor of John H. Walton. Walton has been at the forefront of evangelical scholars who advocate for reading the Old Testament in light of its ancient Near Eastern context. He recognizes that it is rarely as simple as saying merely that “Israel is just like their neighbors” or “Israel is opposed to everything the ancient Near East stood for,” but seeks to show how Israel navigated its theological surroundings. I sought to follow this caution as I worked on the topic of divine weapons. Continuity is seen in the presence of divine weapons belonging to YHWH, just as the divine warriors of Egypt and Assyria owned them. However, the discontinuity relates to the scene I saw in Egypt: the passing of the divine weapon to a king. What I found was that nowhere in the Old Testament does YHWH give a divine weapon to an Israelite king. Shockingly, however, he does give a divine weapon to an enemy of Israel! “And I will strengthen the arms of the king of Babylon and put my sword in his hand, but I will break the arms of Pharaoh, and he will groan before him like a man mortally wounded. I will strengthen the arms of the king of Babylon, but the arms of Pharaoh shall fall. Then they shall know that I am the LORD, when I put my sword into the hand of the king of Babylon and he stretches it out against the land of Egypt” (Ezek 30:24-25 ESV).

My thesis is that this contrast illustrates part of YHWH’s plan for Israel. In general, YHWH desired that Israel trust him. To encourage them to do so, he caused them to be weak in a variety of ways. For example, he prohibited Israelite kings from acquiring a powerful army or making strong international allies through marriage (Deut 17:16-20). Unlike other kings whose gods commanded them to expand their borders, YHWH gave land to other nations and prohibited Israel from taking that land (Deut 2:8-15). The mountainous land of Canaan was not conducive to forming a powerful empire.

I believe that YHWH’s use of divine weapons is part of this theme. If YHWH had given his divine weapon to Israelite kings, this would have empowered them to act more militaristically and without trust in God. Instead, keeping his weapons to himself enabled YHWH to emphasize the relationship of trust he desired that the kings exhibit. This theme of weakness is an important one in biblical theology, appearing throughout the New Testament. Even though we neither live in a world of divine weapons nor serve as kings, we still experience weakness in a multitude of ways. Likewise, YHWH’s expectation for us is the same as for the Israelite kings: trust him in a personal relationship of dependence.

Trimm, Charlie. “The Sword of YHWH: The Human Use of Divine Weapons in the Ancient Near East and the Hebrew Bible.” Pages 293–304 in For Us, but Not to Us: Essays on Creation, Covenant, and Context in Honor of John H. Walton. Edited by Adam E. Miglio, Caryn A. Reeder, Joshua T. Walton, and Kenneth C. Way. Eugene, OR: Pickwick, 2020.