Who Do You Say that I Am?

How does the world reply to Christ’s question in Mark 16:15 ,“But who do you say that I am?” Great teacher? Religious leader? Humanitarian? Example? C. S. Lewis responds this way to the world’s replies:

I am trying here to prevent anyone saying the really foolish thing that people often say about Him: I’m ready to accept Jesus as a great moral teacher, but I don’t accept his claim to be God. That is the one thing we must not say. A man who was merely a man and said the sort of things Jesus said would not be a great moral teacher. He would either be a lunatic — on the level with the man who says he is a poached egg — or else he would be the Devil of Hell. You must make your choice. Either this man was, and is, the Son of God, or else a madman or something worse. You can shut him up for a fool, you can spit at him and kill him as a demon or you can fall at his feet and call him Lord and God, but let us not come with any patronizing nonsense about his being a great human teacher. He has not left that open to us. He did not intend to. Mere Christianity

As Lewis recognizes, Christ is far more than a great moral teacher. Christ, as revealed in Scripture, is the holy Son of God. Followers of Christ, like the world, often focus on Christ’s humanity, love, humility, and self-sacrificial example. All of these aspects are true about Christ. This focus can, however, sometimes result in an attitude of over familiarity and a failure to recognize Christ’s sovereign majesty as our ascended, holy Lord. This is not a new problem. When Christ asked his disciples in Mark 16:13-15 “What do people say about the Son of Man?” they responded, “Some people say you are John the Baptist or maybe Elijah or Jeremiah or some other prophet.” Then he asked them, “But who do you say I am?” Peter responded, “You are the Messiah, the Son of the living God.” While Peter and the other disciples recognized Christ as the Messiah, they often failed to act in proper reverence. As the disciples walked alongside of Christ, however, their responses moved from a posture of familiarity to a recognition that they were in the presence of the holy God. For example, John, in Mark 10:35, called Christ “teacher” and asked him to grant him and his brother James a place at his right and left side. We see a dramatic change in Revelation 1:17-19. When John finds himself in the presence of the holy risen Christ, he falls down as if he were dead. It is only when Christ touches him with the same hand with which he holds the stars, that John is able to rise and stand in Christ’s holy presence. The resurrected Christ enables John to have a new vision of what it means to be a disciple of Christ.

If you were asked by Christ today the very question that he posed to the disciples how would you respond?

We are called, like John, to recognize the glory of the holy, risen Christ. We should move from seeing Christ simply as our teacher, to acknowledging his holiness and sovereign majesty. Though we do not see him in his full glory, like John did, we are given a glimpse of his holiness in the Word.

What should our response be to the holy, risen Christ?

The only appropriate response is, like John, to fall down and worship Christ and to bear witness to his holiness. Our new identity in Christ calls us to not simply be followers of Christ, but to be holy like Christ (1 Peter 1:16). Christ calls us to be obedient children who have been ransomed from death to new life. Our hope is not in ourselves, our moral behavior, or our acceptance by others. Rather it is in the resurrected Christ, who purchased our redemption, thereby redeeming us, cleansing us, restoring the image of God in us, and enabling us to have a new nature, like his. Our new nature enables us to love God and love others, pointing ultimately to Christ’s character and glory (Mark 12:30-31). God promises to complete the good work that he has begun in us (Phil. 1:6). Our hope and faith are not based on our good work, but on Christ’s good work already completed. We await in faith and hope, both gifts given to us, to see his work finally completed in us at the second coming. 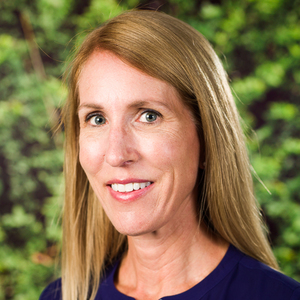 Karin Spiecker Stetina is passionate about teaching theology that is aimed at loving the Lord our God with all our heart, mind, soul, and strength (Matt. 22:37). She aims to relate theology to following Christ in daily life. She taught theology and church history for nearly 20 years at Wheaton College before coming to Biola University where she serves as an Associate Professor of Theology at Talbot School of Theology. She has been a consultant and an editor for Luther Digest and is currently on the committee for Church History Since 1700 for the Evangelical Theological Society. She has her ministry license with the Evangelical Free Church and has served on the Women’s Ministry Team at Grace Ev. Free in La Mirada, Calif. Stetina’s research interests include Reformation Theology and the theology of John Calvin, Martin Luther, and Jonathan Edwards. She is the author of The Fatherhood of God in John Calvin’s Thought (Paternoster, 2016), Jonathan Edwards’ Early Understanding of Religious Experience (Mellen Press, 2011), and How to Read Theology for All Its Worth (Zondervan, 2020). She is blessed with four wonderful children: Caroline, Ellie, Cole and Alex.