Warfare in the Ancient Near East and the Old Testament 5: Pictures From Old Books

My recently published book on warfare in the ancient Near East and the Old Testament includes about 150 pictures. Besides the pictures from friends that I presented in my last post, another good source of pictures is books that are no longer in copyright (currently that is roughly everything published before 1930). This post will present several pictures from these older books, both from Assyrian and Egypt.

A book by Botta and Flandin in 1849 introduced the world to the reliefs of the Assyrian king Sargon II, and this book has now been made available online by the New York City Library. The first relief below is an intriguing image of a soldier inside a siege machine apparently reading something. Considering that he is in the middle of a battle, most likely he is calling for the surrender of the enemy, perhaps illustrating what the call to surrender by the Assyrians in Isaiah 36/2 Kings 18 looked like. The other relief shows the Assyrian divine standards attached to the chariots allowing the gods to go into battle with the troops.

Reliefs 1 and 2: Calling for Surrender 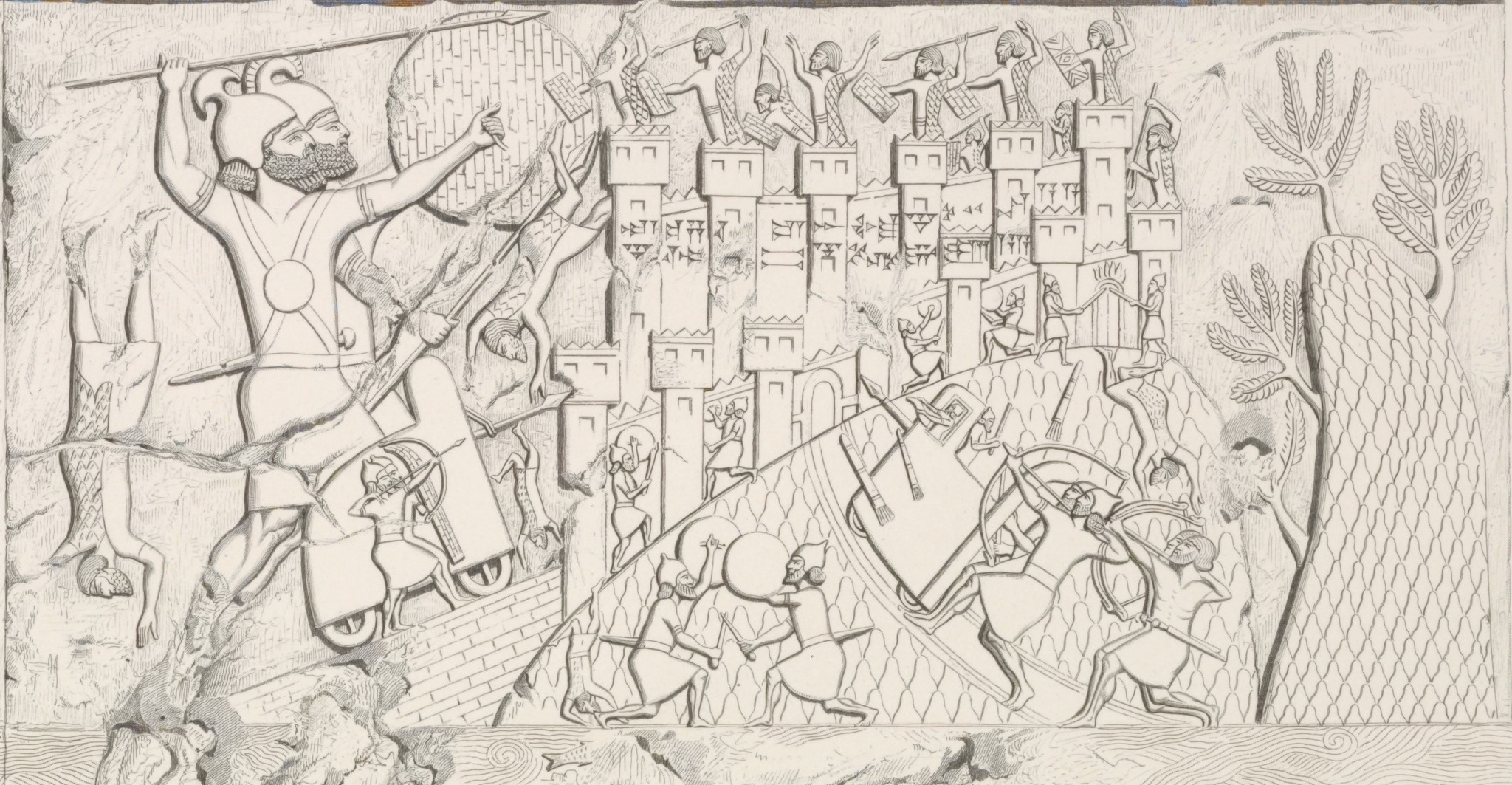 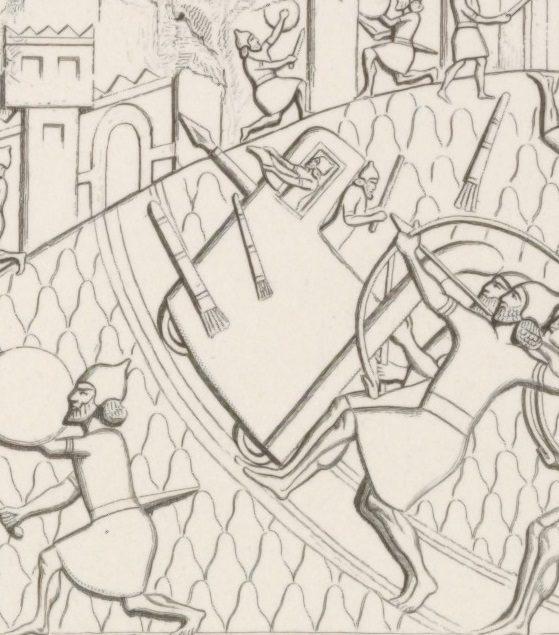 Relief 3: Standards on an Assyrian Chariot 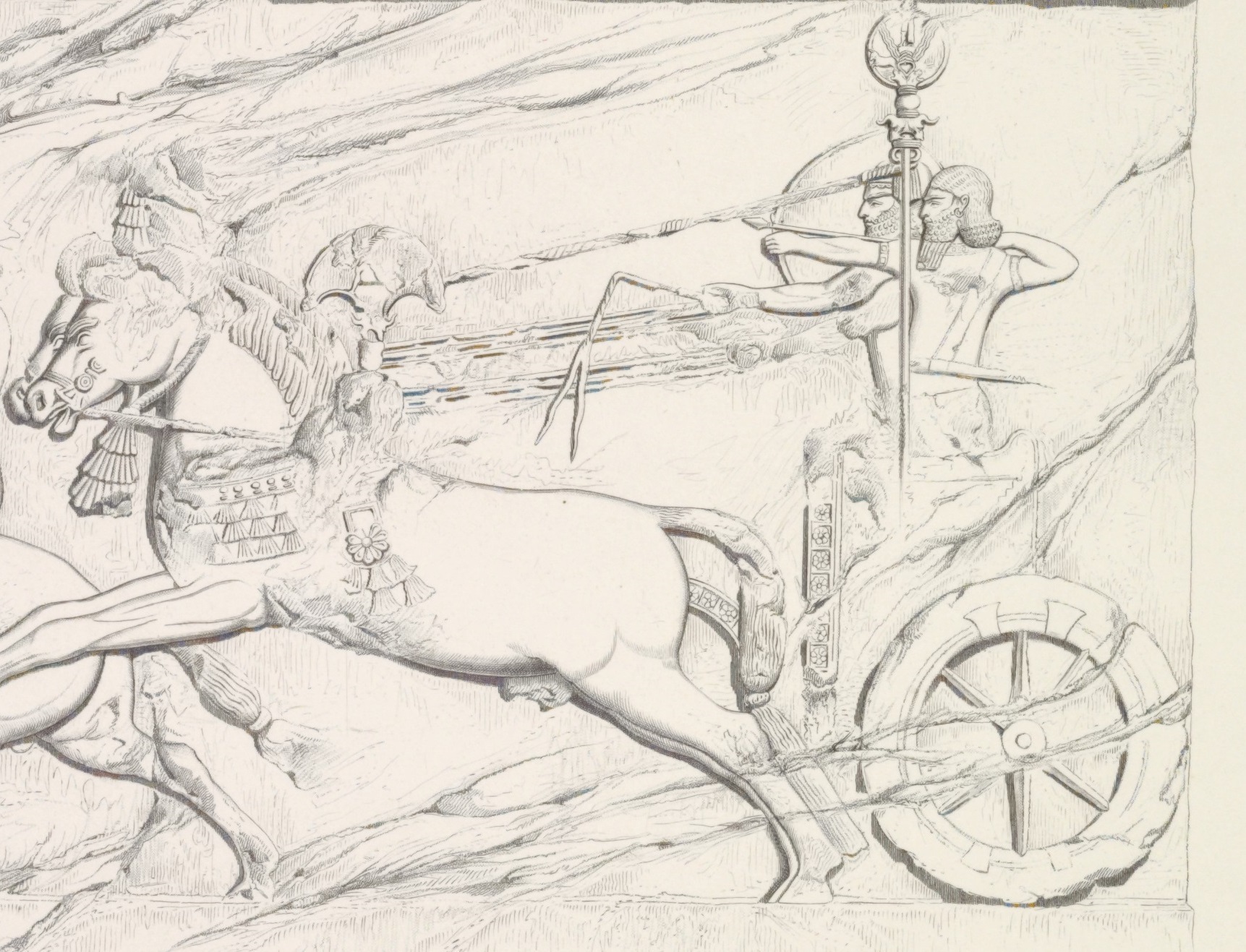 The New York Public Library also published online drawings done of reliefs from other Assyrian kings. In one very busy relief of a battle against Elam (see the full relief of the battle here), the late Assyrian king Ashurbanipal depicts his soldiers forcing the enemy to do something that looks like kneading bread. In his inscription describing the battle, he provides what is probably the meaning of this scene: he forced his enemies to dig up the bones of their ancestors and grind them to dust. This kind of harsh treatment of enemies is what inspires such hatred toward the Assyrians by such biblical authors as Nahum.

Relief 4: Crushing the Bones of the Ancestors 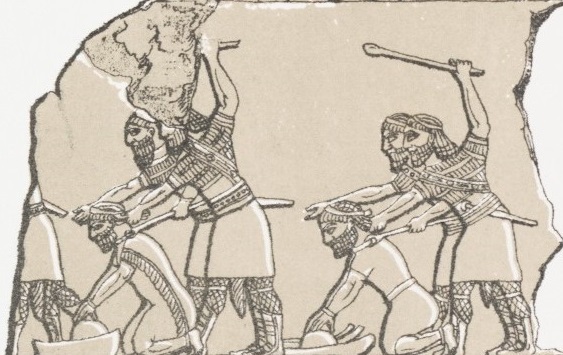 Layard, Austen H. The Monuments of Nineveh from Drawings Made on the Spot. London: J. Murray, 1853. Photo courtesy of the New York Public Library.

One set of reliefs from Shalmaneser III were part of a gate at Balawat; the reliefs were parts of the bands of the gate. Due to the smaller space, the pictures are much more stylized than the bigger wall reliefs. The example given below depicts the Assyrians exterminating their enemies (it is unclear if is during a battle or after a battle).

Relief 5: Extermination of Enemies by Assyrians

Many discoveries from Egypt were also published a century ago or more. One of the most famous Egyptian battles occurred in 1274 BC at Qadesh (in modern-day Syria) against the Hittites and might have been the largest chariot battle in recorded history (the numbers are debated, but the Egyptian army was somewhere between twenty and forty thousand and the Hittites might have had as many as fifty thousand men). Depending on how one dates the Exodus, this is either during the time of the Judges or just before the entrance of Israel into Canaan. Egypt won the battle, but was unable to gain anything long-term from the victory and immediately returned to Egypt. However, Ramses II made many reliefs of the battle; the relief below is a line drawing from 1903. The top left of the relief shows the Egyptian camp, in which several Hittite spies are being beaten to learn the location of the Hittite army. They divulge the information, but it is too late. The bottom right of the relief shows the surprise attack by the Hittites against the Egyptian camp. Since the relief is from the approximate time period of the exodus it reveals the limitless numbers and power of the Egyptian army through the apparently never-ending line of soldiers and chariots in the bottom left of the relief. 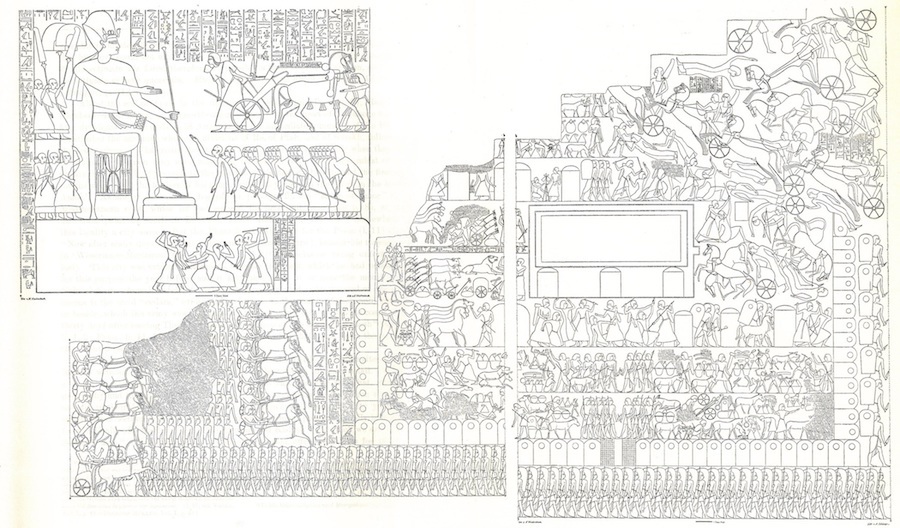 Relief of Ramses II at the Ramesseum; line drawing from James Henry Breasted, The Battle of Kadesh: A Study in the Earliest Known Military Strategy (1903), plate 1