What a Difference a Century and a Half Can Make! 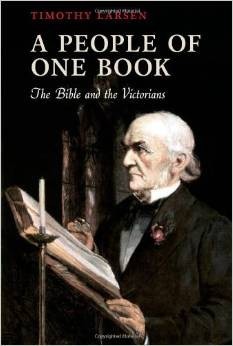 In 19th century England, Atheists knew more about the Bible than most Christians do today. So did Liberal Anglicans, Anglo-Catholics, Unitarians, and Agnostics. So claims Timothy Larsen in A People of One Book: The Bible and the Victorians (Oxford, 2011).

Larsen makes a convincing case that Victorian England was saturated with the Bible. Nineteenth century English people in general cared more about the Bible than many self-professing Christians do today. Whether they believed it was true or not made little difference in whether they read it, quoted from it, and thought it was important for their society. In fact, claims Larsen, you cannot effectively understand the Victorians without understanding the role that the Bible played in various spheres (in literature, politics, reform movements, and science, to name a few). Granted, much of the Bible’s employment in such settings amounted to little more than proof-texting. But the value of the Bible for an educated society—from the perspective of a Victorian—is indisputable. What a difference a century and a half can make! Now the Bible has little impact upon English society.

American society of the same period—and before—was similar, even though Larsen limits his study to the English of the 1800s. It is not true, of course, that all the “founding fathers” of the United States in the 18th century were born-again and submitted to the Lordship of Christ Christians; some, like Thomas Jefferson and Benjamin Franklin patently were not. Nor was everyone a genuine Christian in American society during the 19th century, the century Larsen studies. But in both centuries, people in the United States read, memorized, and used the Bible; they valued it both in their personal lives and in society. Once again, what a difference a century and a half can make! The Barna Group avers that 60% of Americans can’t even recall five of the Ten Commandments. You can’t keep ‘em if you don’t know ‘em. As we know, 21st century American society places little value anymore upon the Bible.

I am not going to attempt here to make any recommendations about what we should do about this on a societal level. But I do know that among professing Christians we need to insistently and repeatedly emphasize that our disengagement with the Bible is intolerable. We need to once again become “a people of one book,” learning it, loving it, and living it. We evangelicals, after all, are regularly identified as evangelicals by our historical commitment to the Bible. One of David Bebbington’s four identifying marks of evangelicals is “biblicism.” (The other three are conversionism, activism, and crucicentrism; the terms are his.) But even evangelical Christians will cease to be “Biblicist”—or biblical, for that matter—if we don’t recommit ourselves to learning, loving, and living out the One Book, the Bible.

For more on biblical illiteracy, see my recent article in the Biola Magazine entitled “The Crisis of Biblical Literacy and What We Can Do About It.” For an exploration of the spiritual problems underlying our disengagement with the Bible, see my recent book, Bible Revival: Recommitting Ourselves to One Book.