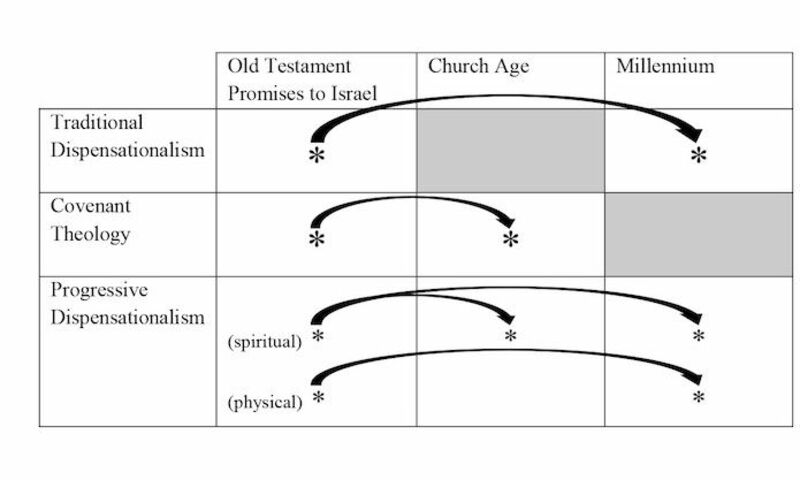 Kingdom: The “kingdom” in Jesus’s teaching is primarily future and physical.

My ultra-short summary: The church does not presently share in Israel’s promises.

Kingdom: The “kingdom” in Jesus’s teaching is primarily present and spiritual.

My ultra-short summary: The Old Testament promises to Israel get applied to the church.

Some combination of both approaches has been increasingly recognized by biblical scholars and theologians.

Detractors: Their detractors might call this Cake & Eat It Too Theology.

Kingdom: Some verses about the “kingdom” in Jesus’s teaching point toward something spiritual in the present, others toward a future spiritual and physical age (Millennium), and others toward both.

My ultra-short summary: The church spiritually shares in the promises to Israel, but God still has a future plan for believing ethnic Israel.

As one scholar put it, Progressive Dispensationalists may want to view themselves as dispensationalists with a small d. Most Progressive dispensationalists I have talked to — and I have talked to many over the years — feel as much appreciation for what they have gained from Covenant Theologians as they do for what they have gained from Traditional Dispensationalists. They really are trying to “have their cake and eat it too.” I think that the main reason “dispensationalism” continues to be included in the description is because early articulators of Progressive Dispensationalism (such as Robert Saucy, Craig Blaising, and Darrell Bock) cut their theological teeth in dispensational schools, and continued to affirm some of the notions they learned from their background. But a biblical interpreter could agree with the main tenets of this approach and call it something else … I don’t know, something like Both-And Premillennialism? In the end, whatever it gets called ought to be multisyllabic and hard-to-pronounce, don’t you think?

I wonder if trying to “have your cake and eat it too” might not be such a bad thing when it comes to certain areas of biblical theology — like the relationship of Israel and the church. The more biblical affirmations that can be affirmed without resorting to hermeneutical gymnastics should be affirmed — and the more biblical material that can be held together without resorting to theological gymnastics should be held together — wouldn’t you agree?