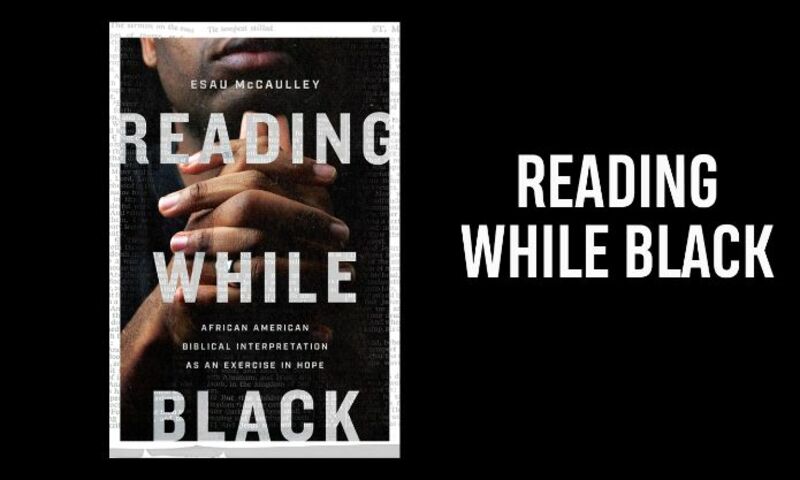 Esau McCaulley is a professor of New Testament at Wheaton College, an ordained Anglican priest, and a fellow board member of the Institute for Biblical Research. I'm guessing that he wrote Reading While Black: African American Biblical Interpretation as an Exercise in Hope (IVP, 2020) with Black readers in mind. But as a white woman, I found it both helpful and inspiring. Christianity Today recognized it as the Beautiful Orthodoxy Book of the Year in 2020. Reading While Black also earned awards from The Gospel Coalition and Outreach magazine. Those honors are well deserved. Over a year after publication, at the time I’m writing this blog post, Reading While Black is still ranked #1 in Christian Bible Exegesis & Hermeneutics on Amazon.

The title of Esau McCaulley’s book may be off-putting for some. The concept of “Reading While Black” may seem like a reader-response approach to hermeneutics. It’s not. McCaulley takes seriously the Bible’s authoritative status as the Word of God. He’s not reading himself into the text or advocating that others do so. He offers no new hermeneutical method. McCaulley simply recognizes that our life experiences prepare us to notice things in the text that others may have overlooked.

I grew up in a very monoethnic community. Nearly everyone I knew at church and school was an American of Dutch descent. That environment had many strengths. I gained much from my teachers, pastors, mentors, and peers. But it also limited my perspective. Over the past 5 or 6 years, I've been intentionally reading and interacting much more widely. I'm convinced that when we only listen to people who share the same social location, we're missing out on a ton of insight. I'm discovering a rich world of biblical reflection by African, African-American, Latino/a, Asian, Asian-American, First Nations, and Islander believers. These insights don’t nullify what I learned growing up, but they have greatly enriched it. I’ve become a fellow for the Every Voice Kingdom Diversity initiative co-directed by Talbot’s own Dr. Charlie Trimm so that I can help others discover the treasures of the global church.

Much of what publishers select to publish by minority authors reflects the politics of the ivory tower, which is often critical of Scripture, and, at times, representing a departure from the faith tradition. As a result, it's much harder to find published works that represent the views of the majority of churches in the global south, churches that are by-and-large conservative.

In Reading While Black, Esau seeks to recover the resources of the Black church tradition that arise from the pulpit and the pew rather than from the ivory tower. He models a faith-filled reading of the biblical text that remains engaged with politics and justice but does not neglect the call to holy living. McCaulley believes, as I do, that Scripture is our guide for faith and practice — that if we’re not living it, then we haven’t fully heard it.

Each of his chapters tackles an issue about which the Scriptures have something profound to say — a theology of policing, the political witness of the church, the pursuit of justice, black identity, black anger, and slavery. He issues a prophetic call to return to the Scriptures and to a life of faithfulness. His is not a call to "make the best of" injustice, nor does he seek a violent overthrow. Esau engages tough questions with verve, urging active but peaceful resistance to injustice.

I'm grateful for his voice. I've known Esau for a while now, and I've seen firsthand his commitment to the authority of Scripture. He’s willing to say hard things that need to be said, but to do it with pastoral sensitivity and kindness. I'm honored to call him my friend.

Esau convinced me that the Black Church tradition holds the key to maintaining fidelity to the Scriptures while fully engaging in the struggle for justice. This book is an excellent starting point for those who want to listen and learn a new way forward. Esau’s prophetic voice is rooted in Scripture and full of hope. His book is a gift to the church.