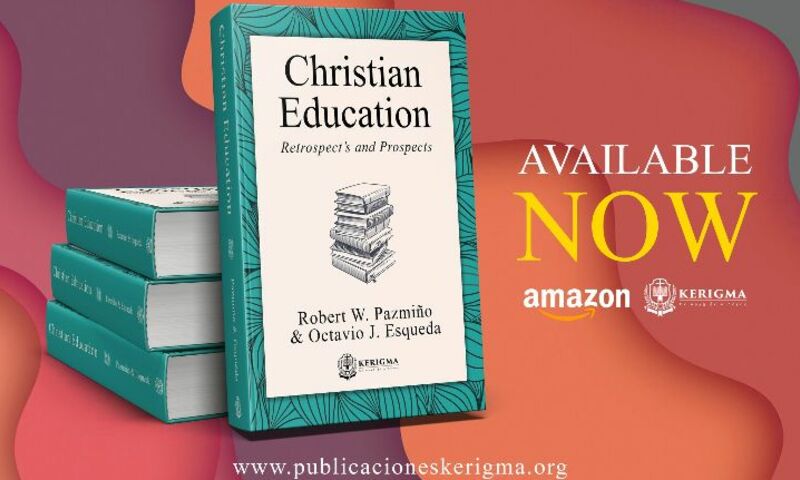 This new book Christian Education: Retrospects and Prospects honors the life and ministry of Dr. Robert (Bob) W. Pazmiño. The book is a collection of articles about different Christian education foundational issues that Bob published in the prestigious Christian Education Journal during thirty-five years from 1985 to 2020. These articles are a reflection of his academic journey from a young scholar to a consummate expert and mentor. The book concludes with a discussion between him and one of his mentees about the past and future of Christian education.

Elizabeth Conde-Frazier is a well-known name in Christian education and Hispanic theological education. She starts the book with a beautiful tribute to the life and legacy of Bob Pazmiño. Each chapter, in chronological order, represents all the journal articles Bob Pazmiño published in the CEJ. I am privileged to include two chapters with articles I also published in this journal. My participation in the book celebrates the lasting influence of Bob Pazmiño that lives on in his innumerable students and mentees worldwide.

Christian Education: Retrospects and Prospects is a tribute to honor his outstanding career as a Christian educator, but also a recognition of his faithfulness as a scholar-teacher-mentor and most importantly, as a committed follower of Christ.

Robert W. Pazmiño is an easily recognizable name in the field of Christian education. He is a prolific writer with many important publications that have influenced and shaped Christian education scholars worldwide. Several of his seminal works are available in different languages and have reached different generations. I, like many others in Latin America, first became acquainted with him many years ago through the Spanish translation of his seminal book Foundational Issues in Christian Education. Pazmiño actively served in different academic guilds and organizations during his career. His strong evangelical faith and, at the same time, firm ecumenical commitment to learn from others and serve alongside everybody gave him the opportunity to influence different theological traditions and spaces. Pazmiño is an example of transformative scholarship and dedication to the academic discipline of Christian education.

Professor Pazmiño is an excellent educator. His teaching ministry expanded further many decades in different settings and places. Professor Pazmiño was not a scholar who happened to teach, but he was indeed a teacher who taught all the time both orally and in writing. Professor Pazmiño clearly demonstrated his love for all his students in concrete ways. He once shared with me a quote from the Jewish educator Abraham Heschel that has become a guiding principle for my own teaching ministry and that he exemplified in his own teaching career: “It is the personality of the teacher which is the text that the pupils read; the text that they will never forget.” Professor Pazmiño clearly knew and demonstrated that as educators, “we teach who and whose we are.”

Bob Pazmiño, the Mentor and Colleague

Readers know the name Robert W. Pazmiño because of his writings, but anyone who has enjoyed the privilege of personally meeting him knows that he always refers to himself as “Bob” and insists that everybody addresses him that way. Bob Pazmiño has been a friendly and generous colleague to all. His sincere desire to learn from others shaped his teaching career. He values ideas because he values and respects all people. I met Bob in 2003 at an academic conference in the Boston area. At that point, I had just finished my doctorate and was about to start teaching full-time at a theological institution in Texas. Ever since that time, Bob has been a constant encourager and a dear mentor. I had the great privilege to coauthor with him the book Anointed Teaching: Partnership with the Holy Spirit also published by Publicaciones Kerigma. The lasting legacy of true educators is their students and mentees. I am grateful to be one of them.

Bob, the Gentle Follower of Christ

Bob Pazmiño is a wise Christian gentleman. Bob is a faithful follower of Christ who embodies the full extent of gentleness. Bob’s wisdom doesn’t come from intellectual knowledge but from his faith in Christ. James 3:17 describes wisdom from above as “pure, peaceable, gentle, reasonable, full of mercy and good fruits, unwavering, without hypocrisy.” These virtues are evident in Bob’s character. Bob is a family man with strong faith convictions. As you read his words you can rest confident that he truly “walks the talk.”

I am grateful for the opportunity to contribute to this important book that invites readers to join the many voices that honor Dr. Robert (Bob) W. Pazmiño, the scholar, teacher, mentor, colleague, and gentle follower of Christ.