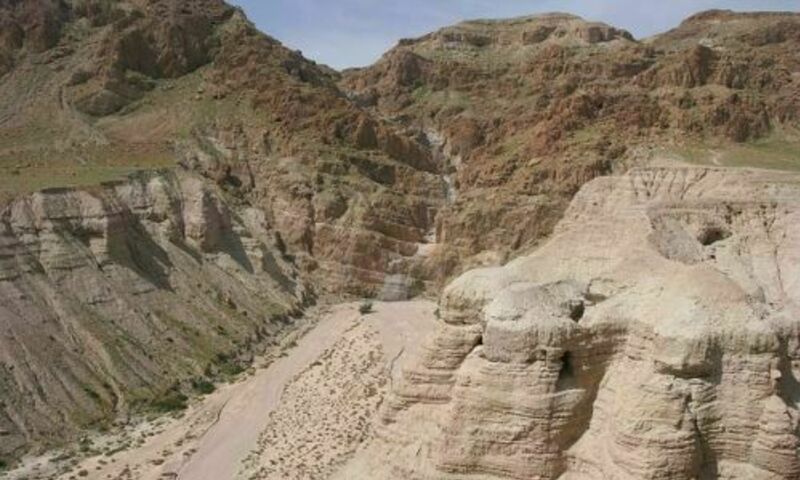 You may have seen one of the many articles about some new fragments of the Dead Sea Scrolls (DSS) that were recently discovered. Fascinating stuff! Hoping to beat looters to a great archeological find, archeologists rappelled down a cliff to reach a cave where they found ancient treasure: coins, baskets, scroll fragments and human remains! All we need to complete the story is a car chase through the desert and maybe one of the archeologists saying “This belongs in a museum!”

Well, what is the significance of this find? I will provide a little background here and then show you a little about how archeologists identify scraps of ancient documents.

The Dead Sea Scrolls were originally deposited in caves near the Dead Sea, likely to protect them during the Jewish War of A.D. 70. Most were discovered in the 1940s and 50s. The DSS include nearly complete copies of almost every book of the Old Testament as well as some other ancient Jewish works. They also include the so-called “sectarian” works that reveal much about the beliefs and practices of one sect of Judaism. The scholarly consensus is that they were a branch of the Essenes.

Almost all of the copies of books of the Bible in the DSS are in Hebrew, but there was one Greek scroll discovered in 1952, a Greek translation of the Twelve Prophets (what some people call the Minor Prophets).

What about the new scroll fragments? A caveat: there is a lot of work yet to be done, so anything we say now about the fragments may be corrected later. Since this new cave includes coins from the Bar Kokhba revolt of A.D. 135, it seems likely that the scroll fragments were deposited then, almost 70 years after the other scrolls were deposited in other caves. Most of the scroll fragments are very small and only one clear photograph has been published so far. But it is clear that these fragments also come from a Greek copy of the Twelve Prophets, specifically from Zechariah and Nahum. Perhaps they are even fragments from the same scroll discovered back in 1952, although that has not yet been confirmed.

How can an archeologist identify such tiny fragments? Let me walk you through how I identified it. I am not an archeologist or a paleographer, but I like looking at ancient manuscripts, and the methods I describe here are similar to what the experts use.

I started with the three lines that had the most visible letters and tried to make sense of them. (You can see the fragment close up here if you want to see what I am describing.)

The first line has ἀνήρ, “man,” but not enough letters to make sense of the rest. The second line was a little easier. The first word I could think of that ends in –σιον in Greek is πλήσιον, “neighbor.” It is followed by αὐτοῦ, “his.” In the third line, ἐν ταῖς means “in the.” It is followed by κα..., which looks like it is the beginning of καρδίαις, “hearts.” So far we have “a man… his neighbor… in the hearts.” If this fragment is from the Septuagint (LXX, the Greek Old Testament), then that’s probably enough information to identify it.

I used my Bible software to search for the phrases ἀνηρ (man), πλήσιον αὐτοῦ (his neighbor) and ἐν ταῖς καρδίαις (in the hearts). A setback: there is no place in the LXX that has that combination of phrases near each other. But there is a verse that has the last two items. Zech. 8:17 has this:

And each (of you), do not plan evil against his neighbor in your hearts…

(The underlined letters are the ones that can be easily read in the scroll fragment.)

Looks pretty close! The DSS fragment seems to fit Zech. 8:17, but we still have the problem of ἀνήρ (man) in the first line. That doesn’t match up with Zech. 8:17 or the verse before. But now we learn something interesting that solves the problem. The same Hebrew word אִישׁ is sometimes translated into Greek with ἀνήρ, man, and sometimes with ἕκαστος, each. Both translation choices can be found elsewhere in the LXX (for example, “each… to his neighbor” vs. “a man… to his neighbor”). Zech. 8:17 in the LXX uses ἕκαστος, but this new (very old!) Dead Sea Scroll fragment has instead ἀνήρ.

The rest of this fragment is even harder to read, but there are already some hints that there are some other slight differences from the LXX. Further photographs and observations by paleographers will bring more clarity about the rest of the verse.

Bottom line: very interesting find, but only tiny fragments of an ancient Greek translation of Zechariah and Nahum survive. There are some small differences from the LXX, although the archeological team has indicated that some other small differences show up in some of the unpublished fragments.

P.S. Do you find this kind of thing fascinating? Come study with us! Talbot School of Theology has fully-online MA programs in Old Testament and in New Testament.