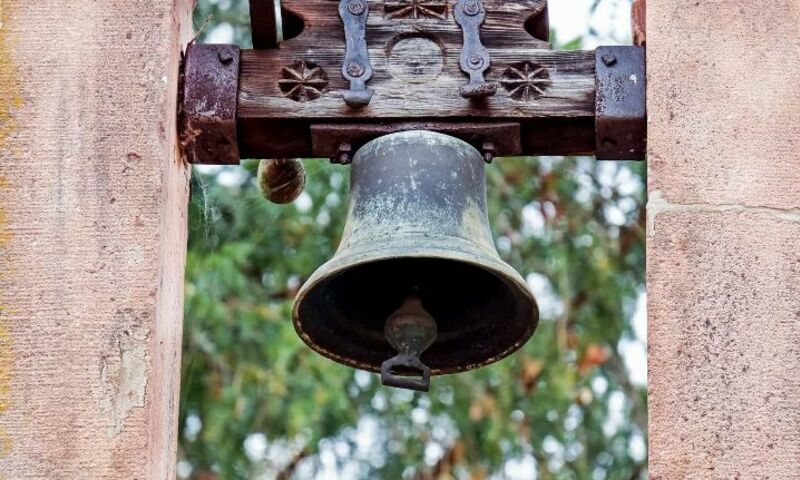 In the Christian world, at least before the advent of modern telecommunications, church bells were the most common way of reminding Christians that a worship service was about to begin. But there is another kind of bell — a “bell that goes off in your head” — that is really useful when you read the Bible. For years I’ve been calling this kind of bell a “biblical bell.” What is a biblical bell, you ask? A biblical bell is an alert that goes off in your head that reminds you that you need to connect something you’ve just read one place in the Bible to somewhere else in the Bible. People who read the Bible a lot hear bells ringing in their heads all the time.

If someone you cared about got sold into slavery and you want to buy him or her out of slavery, you have to pay the price of redemption (Leviticus 25:47-52). This is the most basic meaning of redemption: being bought out of slavery.

God brought the children of Israel out of slavery in Egypt. The Bible describes this as redeeming them from their slavery (Exodus 6:6). Release from slavery in Egypt was Israel’s redemption.

Boaz redeemed Ruth when he exercised his right as kinsman-redeemer and paid the redemption price to acquire all that belonged to Naomi’s deceased husband (Ruth 2:20; 3:9-13; 4:3-11). In so doing, he released Naomi and Ruth out of their desperate plight as widows living in Israel, somewhat akin to slavery during the desperate period of the judges. Of course, Boaz ended up with a wife in the process!

So anytime you see the word “redemption” in the New Testament, say, in the letters of the Apostle Paul, biblical bells ought to go off that remind you that the writer is not just using high-falutin theological language, as many people think when they read the word “redemption,” but that the author is drawing upon the larger theme in the Bible of purchase-out-of-slavery.

So what are we redeemed — or purchased — out of, according to the Apostle Paul? Paul mentions two things in his letters. First, we are redeemed from lawlessness. Titus 2:14 says that Christ “gave himself for us to redeem us from all lawlessness and to purify for himself a people for his own possession who are zealous for good works.” Second, we are redeemed out of the kingdom of darkness. Colossians 1:13-14 says, “He has delivered us from the domain of darkness and transferred us to the kingdom of his beloved Son, in whom we have redemption.” In other words, neither sin nor Satan has a hold on us anymore.

So, brother or sister, you need to remember this the next time you go to work and find yourself feeling alone, as though you’re the only one in this “kingdom.” You need to keep your redemption in mind when you sit in a classroom in which a teacher celebrates immorality. If you find yourself with some unexpected free time some evening, you need to tie into the truth that you have been redeemed from lawlessness and no longer belong in the kingdom of darkness; thus, pursuing sin outside the in-Christ life is not your lot. When you feel unexpected anxiety — or even true fear — in the middle of the night, you need to remember that you have been released from the power of sin and Satan by the Lord Jesus himself, who purchased you with his blood.

This means that our destiny is interconnected with his life rather than to anything that might have bound us in the past. It is true that in the past we were inextricably united to sin and Satan. But now we have been redeemed in Christ.

This post was derived from Devotional #31, “Redeemed in Christ,” in my book: How to Live an ‘In Christ’ Life: 100 Devotional Readings on Union with Christ.