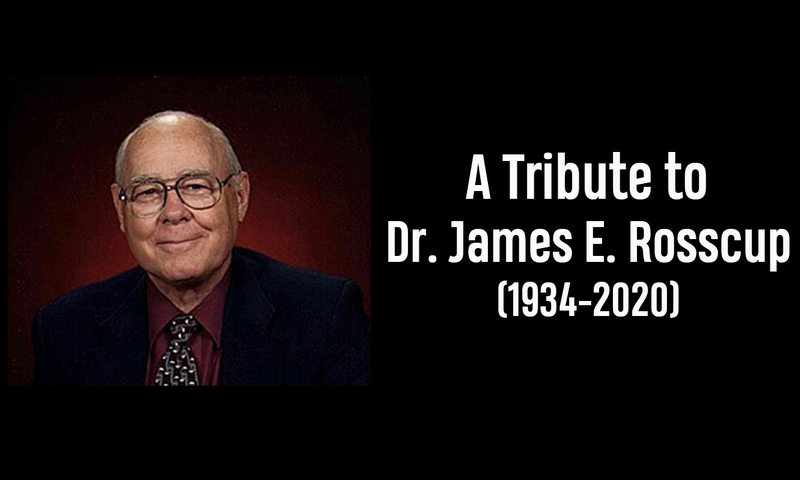 “To pray well is to study well.” This is one of the many memorable statements from Jim Rosscup in the Hermeneutics class I had with him forty years ago. Study of the Bible and prayer were two of the passions of Jim’s life and, for him, they were deeply connected.

Jim Rosscup went to be with the Lord on November 5, 2020, after many years of faithful Bible teaching and ministry. After earning his Th.D. at Dallas Theological Seminary with a dissertation on John 15, the vine and the branches, Jim began his teaching career at Talbot Seminary in 1965 where he also served as Chairman of the Bible Exposition Department. During his years at Talbot (1965-1987), he taught hundreds of students in his two signature classes — Hermeneutics and Daniel & Revelation — and in a variety of other elective classes. He continued his teaching ministry at the Masters Seminary in 1987 where he served at full-time until his retirement in 2005, but continued to teach courses as an adjunct professor.

Midway through his career at Talbot, Jim felt a need to sharpen his skills even further as an interpreter of the Bible and went to the University of Aberdeen (Scotland), where he pursued a major research project for a second doctorate under the supervision of I. Howard Marshall. Jim and his family lived in a fisherman’s cottage on the coast of the North Sea in a village called Muchalls between Aberdeen and Stonehaven. It was cold and wet, but a beautiful setting. The warmth of the Christian friends they made in the area was a blessing to them.

His research on John 15 was published in a volume titled, Abiding in Christ: Studies in John 15 (Wipf & Stock 2003), but his most significant work was a massive, 4-volume, exposition of the prayers of the New Testament titled, An Exposition on Prayer: Igniting the Fuel to Flame Our Communication with God (Lexham Press, 2008). I had the privilege of writing the following endorsement for that work: “Long known for his careful scholarship and practical exposition of the Bible, Dr. Jim Rosscup has created a valuable and useful handbook on everything the Bible has to say about prayer. This volume is a treasure-trove of insights on one of the most important themes in all of Scripture.”

One little known fact about Jim is that a major diversion for him was writing Western novels. He was long a fan of reading Louis L’Amour’s novels. I remember Jim telling me one time during a car trip together that it dawned on him that he could describe sagebrush as good as anyone, so why not give it a try. The result was a series of Westerns beginning with Treachery at Cimarron (Tyndale House, 1984). These he wrote under the pen name, Jim Ross. If my memory serves me correctly, Talbot’s historical theology professor, Alan Gomes, helped edit some of these volumes.

I am personally grateful for Jim Rosscup not only for what I learned from him, but for his encouragement to pursue Ph.D. work at Aberdeen under I. Howard Marshall. When Howard was in Southern California in 1982 for a lecture series, Jim and his wife, Mildred, hosted Barbara and I in his home for dinner so that we could become acquainted with Howard. After I was accepted and moved to Scotland for my Ph.D., Jim wrote several encouraging notes to me.

Jim was rock-solid faithful in his walk with the Lord. Given the emphases of his life — diligent study of the Bible always in a posture of prayer and devotion — this is not a surprise.