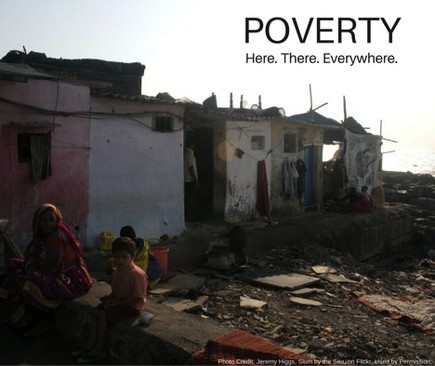 Poverty. It is no respecter of persons. It is a global reality that exists in Calcutta and Compton; Tokyo and Timbuktu; San Francisco and São Paulo. Poverty is seen in nations and neighborhoods. It ravages urban, suburban, and rural areas. And despite the enormous wealth of some areas, make no mistake: poor people reside in Beverly Hills, Dubai, and Midtown Manhattan. Destitution is not limited to places like Dhaka and Detroit. Quite simply, there are examples of poverty everywhere. That isn’t to say poverty is equally distributed or equally affecting. In some areas poverty is more relative and sporadic. In other places, it seems absolute.

Each of us has painful images of poverty emblazoned on our minds. It spans vast swaths across entire nations and large portions of subcontinents. Recent research by Brian Fikkert and Russell Mask (From Dependence to Dignity, 2015) reports that a full one-third of humanity lives on less than $2 (USD) a day. That’s 2.5Bn of the earth’s 7.4 inhabitants. What’s more, over a billion survive on less than a buck each day.

But poverty is by no means only material. If that were the case, then the solution would also be material. In other words, if the effects of poverty were simply people not having enough physical resources, then the simple solution would be to provide things to those in need. Unfortunately it’s more complicated than that.

Poverty does indeed involve material needs. It also involves more complex causes and effects. Poverty is intimately connected to personal shame, the placement of blame, humiliation, fear, danger, hopelessness, and powerlessness among other things. Poverty has material, but also relational dimensions. For these reasons, it is important that poverty not be oversimplified. Doing so only compounds the problem and confuses finding solutions.

Thankfully, and for good reason, the crushing realities of poverty are becoming more widely recognized. After all, solutions often begin with awareness. So whether it is the heart-wrenching destitution of those souls outside the United States or the silent sign-holding of a dejected woman at the nearest intersection, need is all around us.

People Over Politics and Partisanship

As we recognize the great challenges fellow human beings face, we want solutions— now. That’s fair. Action is crucial. But it is also important that we understand the nature of the problems that exist. If we fail to understand the fundamental causes of poverty, we may mistakenly focus on visible symptoms instead of viable solutions. It seems that is at least part of the challenge we face in both society and in the church.

As Americans, we live in a politically-charged and polarized nation. Part of this is understandable. After all, a pluralistic society has radically different worldviews at play. These have led to great culture wars that have tested our civility at times.

What’s more, even within our Christian congregations serious schisms exist. Part of this is undoubtedly due to some believers adopting worldviews that are arguably theologically uninformed or even worldly. It is an established fact that there are varying degrees of authority professing Christians assume about scripture. A low view of scriptural authority invariably has a consequential impact on how one reads, interprets, and applies the Bible.

Yet even among devoted believers with a high commitment to scripture, there are sometimes deep differences. Sometimes our own personal experiences, assumptions, and convictions lead us to different conclusions than others who love both people and our Lord Jesus Christ. In these cases, we might do well to focus primarily on people, those fellow humans in need, over politics and partisanship.

Our political and other perspectives may keep us from ever truly seeing eye to eye, at least on this side of heaven. One way to say it may be that politics are “means” and people are “ends.” In such a hierarchy, human beings created in God’s image are more fundamentally valuable than all else. In this way, keeping the plight of those in need at the forefront may cause us to try harder in our efforts to help them. Such an approach may keep us from retreating into a posture of skepticism or assigning false motives toward others of different perspectives.

Yet even then, at some point our ideological commitments will likely clash. But for the sake of those in need we should give our best efforts toward solidarity and solutions. After all, the issues humanity and civilizations face are profound and we are stronger together than apart. A good place for Christians to begin such a dialogue may be to establish some of the theological reasons for poverty and then drive toward unifying solutions.

Understanding the Problem of Poverty

The Fikkert-Mask work, From Dependence to Dignity, is of particular help in at this juncture (79-101). It gives a theological paradigm for understanding poverty while constructing a conceptual framework toward sustainable solutions to poverty. They argue that the nature of poverty rests in the effects of the Fall of humanity in Eden (Genesis 2-3).

Scripture makes it clear that prior to the rebellion of Adam and Eve, poverty and other social ills did not exist. The Fall changed all that. The moral failure of humankind brought the onset of cosmic disorder and decay. Though created in God’s image and originally possessing innocence, the Fall corrupted the cosmos. People became distorted within their own souls, and they also suffered the effects of interpersonal estrangement. Specifically, the whole and holy relationship between humanity itself was broken, as well as the relationship between humanity and God, and humanity with Creation.

Individual Fallenness and Its Role in Producing Poverty

The result of the Fall then had punishing effects on all aspects of human life. In addition to all else, these also resulted in the problem of poverty. Specifically, the Fall resulted in individual people becoming and being broken. Since our ejection from Eden, we have lost our innocence and become bent in our nature and will. Regarding the problem of poverty, the reality of our individual fallenness leads to the disfigurement of our souls. Outcomes can include bad motives, misplaced values, unhelpful emotions, poor judgment, personal laziness, and other effects that all contribute to poverty, both personal and global. In these ways, we personally bear part of the burden for our poverty. It isn’t only something that happens to us, but poverty is often the result of things that have happened in us. All of this to say that a proper approach to alleviating poverty must begin with the needy taking a degree of personal responsibility, to the extent that they can. Without the notion of personal responsibility, everyone becomes victims and others are always to blame. While it is true that some people are in need at no fault of their own (some victims of disaster, violence, and the like), there is a degree to which many who suffer from poverty have played at least some explicit or implicit role in their own need—though not always.

Oppressive Systems and Their Role in Producing Poverty

Along with broken individuals come broken systems. Because society is comprised of “broken people” collectively, society itself is necessarily fallen. And since culture is the by-product of society, it too suffers the effects of the Fall. The compounding effect of a global population where every single individual suffers the effects of falling short of the glory of God (Romans 3:10) is profound. This brokenness affects not only people as individuals, but other individuals as well.

Not only does our brokenness cause us to hurt and to hurt ourselves, it also contributes to our hurting others and others hurting us. We become guilty of seeking our own best interests over others, and subduing one another. Power and authority are often misused or abused. People are sometimes taken advantage of or exploited by what become oppressive systems. These systems may be religious or social, but they are also economic. Because of the effects of the Fall, compounded by years and generations of time, these forms of economic oppression become genuinely systemic and global (1 John 5:19).

The result is that no organization or entity is left untouched by the effects of the Fall. This plays a direct and indirect role in facilitating poverty both near and far. Whether it is an individual decision made by someone with a wrong motivation that hurts another person financially, a committee action that leads to economic unsustainability in a community, or national and global economic policies that result in financial effects on entire nations and people groups, oppressive systems caused by the Fall are a contributing factor in the problem of poverty.

Demonic Forces and Their Role in Producing Poverty

The effects of intrapersonal and interpersonal fallenness that produce or contribute to personal and global poverty are demonstrably great. Yet these become exponentially worse when we recognize the existence of a personal devil. The Bible forcefully argues that a malevolent, cruel, and sadistic agent named Satan actually exists. This person is irredeemably evil and is the archenemy of all humanity. He walks and stalks, looking for victims on a global scale (1 Peter 5:8). His desire is to steal, kill, and destroy (John 10:10).

This immortal enemy is not only the personification of evil, but he also leads a global band of other vile and powerful beings called demons (Revelation 12:7-9). Together, these form a coalition of darkness who largely rule the temporal elements of the world system (Eph. 6:12, 1 Cor. 2:8). They work collaboratively to assault people and subvert justice. They are set on the destabilization of individuals’ lives and the affairs of nations. They are anarchists in the true sense of the word, causing disorder in every quadrant of reality (1 John 5:19).

The effects of the Devil and his minions cannot be overstated. They not only actively work to unravel the global order in hope of creating chaos, but also rage against humanity at a personal level. This Satanic assault is hand-to-hand combat against both believers and unbelievers, with absolutely no rules of engagement that govern the Devil’s war against humanity, creation, and culture.

Together, the personal, systemic, and satanic forces in our world collude and wreak havoc in the areas of finance and economics. They facilitate want and need and, together, form the roots of poverty in our world. It is important for us as believers to think about issues such as poverty from a theological perspective, so we can respond appropriately—rather than giving knee-jerk reactions that are well-intentioned but less helpful than we would like. Doing this might help us avoid Satan outwitting us, for we are not unaware of his schemes.

Photo Credit: Jeremy Higgs, Slum by the Sea on Flickr. Used by permission.