YHWH Fights for Them: An Interview with Charlie Trimm

Charlie Trimm, Assistant Professor of Biblical and Theological Studies, released a book last year on the exodus and God as a warrior. Following is an interview with the author. 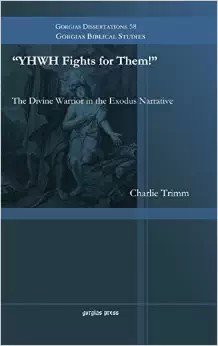 Can you tell us about the background of the book?

The book is a slightly revised version of my dissertation written under the supervision of Dan Block at Wheaton College. The primary audience is Old Testament scholars, but I hope that the book contains enough discussion about God to make it enjoyable for anyone interested in the God of the Old Testament (for example, see the appreciative review of the book by Peter Leithart). As a published dissertation, the book is far too expensive to buy, but a copy might be found at a local library to peruse.

What is your main argument in the book?

I argue that YHWH’s primary role in the entire exodus narrative (Exodus 1-15:21) is a divine warrior. Many scholars have recognized this in the Red Sea account (Exodus 14-15), but I expand this to include not only the plagues but also various other elements in the story (such as the hardening of the heart). The advantage to this viewpoint is that it not only helps us understand Exodus better, but it also fleshes out in greater detail what it means to describe YHWH as a divine warrior.

What are some of your more interesting conclusions in the book?

Here are three conclusions that I have found fascinating. First, YHWH employed chaos as a tool against Egypt. Other divine warriors in the theomachy (divine combat) myths of the ancient Near East showed their power by defeating enemies symbolic of chaos in order to bring order to the world, but YHWH went one step beyond that. “YHWH not only used traditional weapons employed by the divine warriors, but he also usurped weapons associated with cosmic enemies to employ them against Pharaoh. It might even be said that he took on the role of chaos/Yam/Mot/Tiamat/serpent in the theomachy myths, bringing chaos to Egypt and challenging Pharaoh to restore order to Egypt like Baal/Marduk/Seth” (172). When Pharaoh was unable to restore order, it showed that YHWH was greater than Pharaoh. YHWH was so powerful that he could even use chaos for his own purposes.

Second, I view the plagues as stereotypical curses. Each of the plagues frequently appeared in both biblical and extra-biblical lists of curses, punishments that would be meted out to any who broke the treaty in which the curses were contained. (A few of the plagues appear to be unique, such as the blood in the water and the abundance of frogs, but I argue that most treaties had contextualized curses that would strike at the heart of a nation; for Egypt that center of power was the Nile). If I am right, then it implies that Pharaoh had broken a treaty with God reflecting YHWH’s ownership of the entire world. It would also serve as a warning to the Israelites, whose own treaty with YHWH included many of the curses that appeared in the plagues: YHWH would fight against them if they acted like Pharaoh. As can be seen in a variety of ways throughout the exodus narrative and later interpretive traditions, YHWH’s real enemy is not the Egyptians, but those who act like these Egyptians (to state it another way, his real enemy is sin).

Finally, viewing YHWH as a divine warrior results in an interesting view of the hardening of Pharaoh’s heart. One of YHWH’s goals in the exodus was to display his power as a divine warrior as greater than any other power. “However, even though the Pharaohs were among the mightiest kings of the entire world, they would not have been sufficiently powerful to compete effectively with YHWH, as demonstrated by Pharaoh’s quick inclination to accede to YHWH’s demands…. YHWH’s solution was to strengthen an opponent before and during combat to prevent him from surrendering. The hardening did not convert Pharaoh from a friend or a neutral character into an opponent. Nor did the divine control transform him from being a weak king to a powerful king, as YHWH already recognized Pharaoh’s strength of will before his promise to harden his heart (Exod 3:19). But the divine control gave Pharaoh supernatural strength to continue to oppose YHWH to the bitter end” (221-22).