Was Peter Crucified Upside Down? 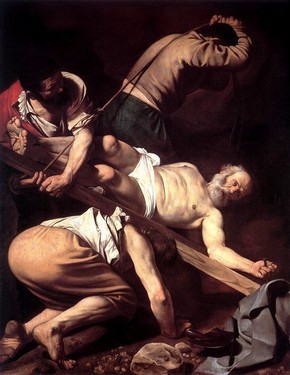 Perhaps the most common claim regarding the martyrdom of Peter is that he was crucified upside down. As the story goes, Peter refused to be crucified upwards as his master Jesus, and so he requested an upside-down death. And the Romans were more than happy to oblige.

As I demonstrate in my recent book The Fate of the Apostles, the historical evidence for the martyrdom of Peter is quite convincing. From the first century onward, the unanimous testimony is that Peter died as a martyr (likely in Rome). And given both the early reference in John 21:18 (“…when you are old, you will stretch out your hands, and another will dress you and carry you where you do not want to go”) and that crucifixion was a common form of punishment for slaves and non-Roman citizens, the crucifixion of Peter is historically likely as well. But what about the claim he was crucified upside down?

The first record of the upside down crucifixion of Peter is found in The Acts of Peter, a late second century apocryphal text (c. AD 180-190). The Acts of Peter is filled with legendary material, such as Peter raising a tuna fish and Simon Magus flying through the air. And yet it does contain a historical core. Christine Thomas writes, “The mere fact that externally attested first-century individuals appear as protagonists in the pages of theActs of Peter is sufficient to show that these narratives were not fictions completely divorced from historical memory.”[1]

In the account of the death of Peter in The Acts of Peter, he approaches the place of execution and gives a speech to the people and the cross (36.7-8). He concludes by saying, “But it is time for you, Peter, to surrender your body to those who are taking it. Take it, then, you whose duty it is. I request you therefore, executioners, to crucify me head-downwards in this way and no other.” Peter gives a final speech while upside down on the cross and then dies (40.11).

Many often assume that Peter’s request shows humility, in that he did not consider himself worthy to die in the same manner as Jesus. But the text does not say this outright. Rather, as I demonstrate more fully in The Fate of the Apostles, his upside down state symbolizes that fallen humanity has now been restored through the cross. The world has been turned upside down by sin, and so Peter can see the upside-down nature of the world clearly while hanging with his head downward on the cross. His speech makes clear that Adam, the “first man,” fell head-downwards and turned the cosmos upside down but only through Christ can the world be seen “upright.” Thus, the crucifixions of Jesus and Peter restore the creation, through the New Adam, to its intended functioning.

The upside down death of Peter clearly serves a theological and narrative function in the text. But could it also be historical? The earliest church father to mention it, Origen, in volume 3 of his Commentary on Genesis in the mid-third century (c. 230), makes no mention of Peter’s prolonged speech. It is uncertain whether Origen derived this from an independent tradition or from the Acts of Peter. We do have evidence Roman executioners varied their crucifixion practices for their own sadistic pleasure, however, so it is not intrinsically implausible Peter was crucified upside-down. Nevertheless, do you think Roman executioners took suggestions from criminals as to how they wanted to be crucified? Probably not.

Still, while it’s possible the tradition of Peter’s upside-down crucifixion preserves an actual memory of his fate, the historical evidence is simply inconclusive.