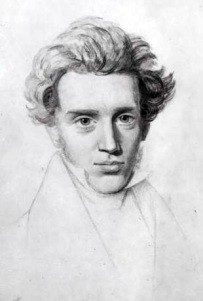 Søren Kierkegaard was born May 5, 1813, in Copenhagen, Denmark. He’s been called a Christian existentialist, a fideist, a satirist, and “the melancholy Dane.” He was concerned about the disconnect between Christian profession and the lived reality of true Christianity. He called his contemporaries to a deeper personal encounter with God. And he wrote with penetrating insight about the failure of the purely aesthetic life—what we today might call secularism—which seeks pleasure without discerning its natural and ultimate end, namely, despair. Kierkegaard’s contribution is considerable, even for the evidentialist. In fact, his sermonic style may be of value to the apologist who insists on the value of evidence. E. J. Carnell, mid-twentieth century, did the most to bring Kierkegaard’s insight into an overall “combinationalist” approach to apologetics. Carnell wrote: “There can be no question that Søren Kierkegaard gave a profoundly convincing defense of the third locus of truth.”

Carnell was speaking of a “third way of knowing,” which respects the tendencies of the human heart, properly submitted to God, to discern religious truth. In this, Kierkegaard (and Carnell) were like Blaise Pascal, who spoke of “reasons of the heart which reason cannot know.” Carnell’s commentary on Kierkegaard continues:

What Christianity has always assumed, Kierkegaard made explicit. . . . Saving faith is not simply an intellectual assent to objective facts. Faith is cordial trust; it is a concerned, inward response to the person and work of Jesus Christ. Until the end of time, therefore, men who remember what it means to be a person will defend the supremacy of truth as inwardness. God sent His Son to make us good, not simply to make it possible for us to recite the creeds of the church.

Carnell is saying that few apologists have noted this vital aspect of Christian belief and conduct. But he issues a caveat:

But what must be questioned is the prudence of Kiekegaard’s attempt to secure inward truth by opposing it to objective evidences. It is from his lips, not those of the biblical writers, one learns that faith must believe what understanding finds contradictory—and for that very reason. Scripture’s healthy balance of the loci of truth has been upset by Kierkegaard. Rationality was bequethed by Jesus Christ as a light by which men may penetrate the darkness of error. ‘The true light that enlightens [gives a spiritually rational nature to] every man was coming into this world’ (John 1:9). Being a rational creature, thus, man must proportion his spiritual commitments to what the mind can conscientiously clear. Apart from this distribution of authority edification is impossible. . . . Saving faith germinates only after the mind is first convinced of the sufficiency of the evidences. If Christ taught plain logical nonsense . . . a balanced man would turn aside from Him as one to be pitied, not trusted. The reason why we are able to trust Christ is that He spoke and lived in a way which is congenial with our axiological expectations.

For Carnell, our “axiological expectations” include both what is existentially compelling and what is rationally convincing. “Faith” without the soul’s commitment may not be faith at all. But what is faith if it is not grounded in good reason? For anyone can have faith in anything.