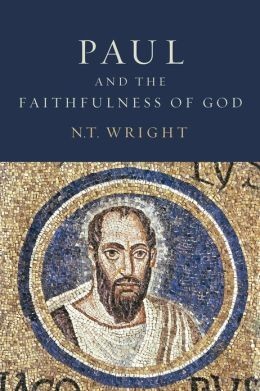 After six months of on-and-off reading, I have just completed N.T. Wright’s book, Paul and the Faithfulness of God. The book is 1660 pages long if you include the bibliography and indices. (If you don’t it’s only 50 pages long ... just kidding.) Here are three things I liked about this two-volume book, and two things that I struggled with.

Three things I liked about Paul and the Faithfulness of God:

Two things I struggled with as I read Paul and the Faithfulness of God:

1. I found myself bogged down whenever Wright actually started to exegete a particular passage from the letters of Paul. I must admit that there were dozens of instances where Wright highlighted some “crucial” point upon which the exegesis of a passage hung that I simply could not see. It’s not that I didn’t understand what he meant (though that did occasionally happen); again and again I simply couldn’t understand how the point he was emphasizing actually arose out of the passage at hand. This means that the most important portion of the book (chapters 10-11) was the most difficult for me, since it was in those chapters that Wright engaged with actual passages at any length.

2. I also struggled to make peace with Wright’s frequent assertions that he was the first person in history to actually understand Paul. I found myself mentally pushing back against his repeated claims that everyone else in the history of interpretation—excepting himself, of course—had misunderstood whatever particular point he happened to be addressing at the moment. Without any concern that I might be exaggerating, I can confidently assert that Wright makes comments along this line hundreds of times in these two volumes. In my opinion, anyone who makes such comments so frequently ought to first encounter a chuckle and then be viewed with a certain amount of skepticism, even if he happens to be as well-known as N.T. Wright—perhaps especially in such a case.

There you have it: Three positives and two concerns about a book that took me six months to read! (I told you it was going to be a short review.) Now it’s time to catch up on my other reading ...[1]

[1] By the way, I am not planning to respond to questions or comments on this post (though you can feel free to post a comment if you wish). I purposely kept the review extremely short, even though I’m keenly aware that there are hundreds of discussion threads that could spread out from a post like this. Thanks for your understanding!