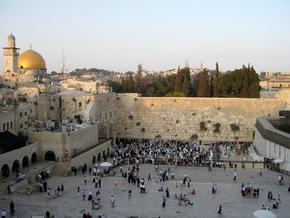 Recently, while reading through the minor prophet Haggai in the LXX (the Greek Old Testament), I noticed a phrase that looked familiar: “before a stone was laid on a stone (λίθον ἐπὶ λίθον) in the Temple of the Lord…” (Hag 2:15). Hmm… where had I seen λίθον ἐπὶ λίθον before? Yes: in Jesus’ Olivet Discourse, when he describes the coming destruction of the Temple buildings: “Do you see all these things? I tell you the truth: there will not be a stone left on a stone (λίθος ἐπὶ λίθον) here; all will be torn down” (Matt 24:2; see parallels in Mk 13:2, Lk 19:44).

My first thought was that “stone upon stone” must be a common phrase. But it turns out that, while the Greek word for stone (λίθος) is common, the phrase “stone upon stone” (λίθος ἐπὶ λίθον) is rare. It is only found in Jesus’ Temple saying and in Haggai 2:15. When tracking the use of the OT in the NT, the rarer a word or phrase is, the more likely that it is an intentional allusion. The fact that Jesus and Haggai both use the phrase to refer to the rebuilt Temple (sometimes called Zerubbabel’s Temple) also makes it more likely that Jesus was alluding to Haggai. Furthermore, the saying in Matthew occurs in a passage packed with allusions to the OT. Within chapter 24, Jesus repeatedly quotes or alludes to Daniel, Zechariah and Isaiah. It’s important to remember that Jesus preached at a time when even ordinary people memorized large portions of Scripture, so he could expect that people would hear his many references to the OT.

But the passage in Haggai is about the rebuilding of the Temple, and Jesus was talking about its destruction. How could these two fit together? The book of Haggai, written in 520 BC, encouraged the residents of Jerusalem to resume building the Temple. The foundation had been laid in 536 BC, but then construction was abandoned. In chapter 2, Haggai uses the phrase “before one stone was laid upon another” to refer back to the time before the Temple foundation was laid, and to remind them of the crop failures that they endured both before and after (Hagg 2:15-17). God promised that he would bless them with abundant crops if they would finish the Temple. Jesus, on the other hand, was proclaiming the coming destruction of the Temple because of their rejection of Jesus (Luke 19:44, Mt 25:35-36).

I think that Jesus was using this phrase from Haggai to describe a reversal of the restoration. If the rebuilding of the Temple (“before a stone was laid on stone” / πρὸ τοῦ θεῖναι λίθον ἐπὶ λίθον) signified the end of Exile and the end of the covenant curse, then the coming destruction (“not a stone will be left on a stone” / οὐ μὴ ἀφεθῇ… λίθος ἐπὶ λίθον) signified the return of the curse. Just as Haggai’s generation failed to return to God (Hag 2:17), Jesus’ generation failed to “recognize the hour of their visitation” (Lk 19:44). As Jesus contemplated this coming disaster, he wept (Lk 19:41) and warned (Mt 24:4-20).

By the way, visitors to the Western Wall in Jerusalem (also known as the Wailing Wall, pictured above) sometimes wonder about the accuracy of Jesus’ prediction, since the Western Wall is made of many very large stones piled on each other. There is a simple answer to this question. Jesus’ prediction was specifically about the destruction of “the Temple buildings” (Matt 24:1). The Western Wall is actually part of the foundation. It is a retaining wall, built by Herod the Great to increase the size of the Temple complex. The buildings that Jesus’ disciples pointed out to him were all utterly destroyed by Rome in AD 70, but the retaining wall was left standing. Removing the retaining wall stones, which range in weight from 2 tons to 520 tons, would have been an immense task.