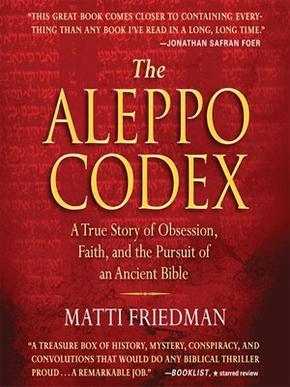 Is it possible for a true story about an ancient manuscript of the Hebrew Bible to be thrilling? Last year I read The Aleppo Codex by Matti Friedman (Algonquin Books, 2012), and it was exceptionally thrilling. It involves lots of intrigue, mystery, and even a possible murder. The Aleppo Codex (“codex” means an ancient manuscript in book form) used to be the oldest complete manuscript of the Hebrew Bible known, copied in the tenth century A.D. In its early history it was moved from Jerusalem to Egypt and then to Aleppo in Syria, where it remained for some five centuries. Rioters burned down the synagogue where it was kept in response to the U.N. declaration in 1947 that established the state of Israel. For many years it was thought that it was destroyed in the fire, but about ten years later large portions of it surfaced in Jerusalem, where it remains to this day. It is missing most of the Torah among other biblical books. How did it get there? What happened to it during those years? How much of it, if any, was actually burned in the fire? What has happened to it since it arrived in Jerusalem? Those are all questions that make up this mystery thriller. As the story unfolds it educates the reader about how ancient Hebrew manuscripts were made, about the Holocaust, about how the modern state of Israel began, and about the religion and politics of modern Israel.

Now comes word that the author has won the 2014 Sami Rohr Prize for Jewish Literature for a sum of $100,000. Read this book for fun, thrills, and even some education along the way. I give it a two thumbs up.

A facsimile of the actual Aleppo Codex (but missing most of the Torah) may be found in the Biola Library, and it has also been published online.