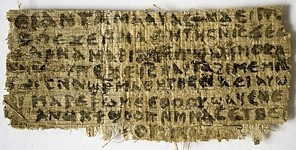 Last week, I posted my initial take on the so-called "Gospel of Jesus' Wife." My first point was that it was "too early to tell" whether the manuscript was genuine. In the last twenty years, forgers have produced some amazingly convincing forgeries, so scholars have become cautious about all archeological finds.

In the case of this Coptic fragment, the glaring immediate problem is that no one knows where it came from. The best way to be certain that an artifact is genuine is to have an archeological team document its discovery. Most of the recent forgeries have been released onto the antiquities black market. For the forger, this is an ideal way to make money, and it is much more difficult for anyone to verify the authenticity of the find. Many artifacts on the black market are genuine, but they are all suspect.

Now that photos of the manuscript have been circulating among experts for a few weeks, there are even more reasons to believe that it is a forgery. Although we probably won't have certainty for several months yet, here are the reasons that it is more likely that the "Gospel of Jesus' Wife" is a hoax:

Now, it is still possible that something will persuade the experts that this ancient fragment is genuine. But even if it is "genuine," all that means is that the document was genuinely written by Gnostics - people who regularly made up sayings about Jesus to bolster their own religion. It still would be written centuries after Jesus, by people with no connection to the eyewitnesses.