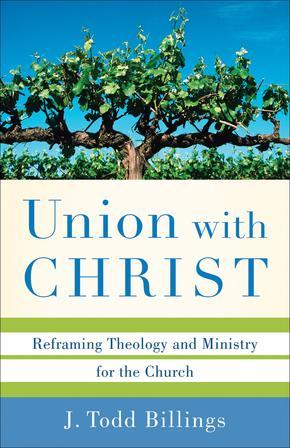 Todd Billings is one of evangelicalism’s brightest up-and-coming pastor-scholars. From missions work in Uganda, to a Harvard Ph.D., to an adopted daughter from Ethiopia, Billings is advancing many of the projects dear to evangelicalism. You may have seen his wonderful cover article for Christianity Today (October 2011) on the theological interpretation of Scripture. In November 2011 he published the distillation of nearly a decade’s sustained reflection on a theme that is central to the gospel: the believer’s union with Christ.

Billings begins with an account of our salvation in terms of our adoption into union with Christ, an adoption initiated by the Father, grounded in Christ, and applied to us by the Spirit. The four chapters that follow then explore what such an account of salvation means for how we address human sin (chapter 2), know God (chapter 3), seek social justice (chapter 4), and approach Christian ministry (chapter 5).

The publisher’s page has four short video clips of Billings summarizing these themes. So I’ll just burrow down into one chapter in an attempt to give the flavor of the whole.

The strategy here is reminiscent of one of the few things I remember from my undergrad days. When you want to test a math equation, you test its boundary conditions. What does it do when you give it nothing? What does it do when you give it everything? In the automotive analogy, what does the car do when you floor it, when you slam on the brakes, when you pull a hard left at 30mph? Billings’s book is clearly aimed at the practical implications. So I figured that if he could do something relevant, practical, and engaging with the chapter that has ‘mystery’ and ‘incomprehensibility’ in the title (chapter 3)—if Billings could be practical here, the rest would be easy.

And he is. So what does our union with Christ mean for how we know God? A biblical account of knowing God will have to speak both of God’s transcendence (so there’s stuff we can’t know about God) and his immanence (so there’s stuff we can). God is only ‘comprehensible’ (entirely knowable) to himself; to us he is ‘incomprehensible’ (not entirely knowable, partially knowable—but not unknowable!). But it is God himself who has seen to it that we can have true and important partial knowledge of him. And he has done so by addressing us and becoming one with us in the Son. When the Father then unites us with the Son by the Holy Spirit, we begin to share in Jesus’ own human knowledge of the Father. So both now and in glory, the way God enables us know him is not ultimately by filling our brains with information about him. The Father lets us see him as only Jesus can (87-88). What an amazing privilege!

Now on the way to this conclusion, Billings explores patristic apophaticism and the nuances of Calvin’s eschatology and the account of archetypal and ectypal knowledge in (some guy I’ve never heard of named) Franciscus Junius (1545-1602). We meet biblical theologians like John Owen (1616-83) and Herman Bavinck (1854-1921) and modern theologians like Gordon Kaufman (1925-2011) and Sallie McFague (1933‑). Of course, I love this kind of stuff. But it’s all in order to secure the basic point that everything we will ever know about God, from whatever source—it all comes not as human achievement but as divine gift. That’s a lot to be thankful for. Cool, eh?

“Wait a minute, Price. What happened to ‘relevant’ and ‘practical’? I want to know what this means for me.”

Well, OK. How about this. We only know God because he has accommodated himself to our slender, human capacities, right? Billings asks the probing question: Do we value God’s loving act of stooping down to us in the incarnation? Do we like God’s stoop? Calvin speaks of God babbling to his little human creatures like a mother babbles to her infant (Institutes 1.13.1). How well do we think God babbles? According to Billings, many who focus their ministries on supposedly making the gospel “relevant” to culture are in fact attempting to find some other way than Jesus, as he is revealed in Scripture, to help people know God. Such ministry strategies suggest that God is a bad babbler or an insensitive seeker. “If we are to have genuine communion with God, we must meet God [as he] accommodates himself to us in Scripture and most fully in Jesus Christ rather than seek to climb the ladder of self-devised analogies toward the mysterious God” (93). The point is that enabling people to know God is something that only God himself can do, and that God himself has already done—perfectly, unsurpassably—in Jesus and Scripture. We ignore this at our ministerial peril. Q.E.D.

So pick up a copy and spend a little time meditating with Billings on the gospel of our union with Christ. It’s hard to beat a book that’s exegetically, historically, and theologically rich, clearly written, pastorally sensitive, culturally engaged, generous in tone, practical—and short!

An Ancient Prayer to Help Us Pray into Our Cultural Moment