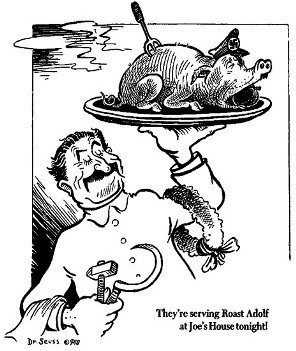 As the father of eight children, I have spent a lot of time with Dr. Seuss. It's scary that I can quote pages of Cat in the Hat from memory. But my time in Dr. Seuss occasionally pays off when I study the Bible. You see, Dr. Seuss was a political cartoonist in the 1930s and 40s, and political cartoons are ideal analogies for understanding symbolism in Revelation (an idea that I got from Dr. David Scholer, one of my doctoral advisors at Fuller). What is interesting, and what makes this relevant to the study of Revelation, is that Dr. Seuss' cartoons were immediately obvious to readers when they were printed, but are difficult to understand today unless we study history.

Take a look at the cartoon to the left. If you are my age or older, you can immediately recognize the hammer and sickle in the chef's hands as a symbol of Communism or of the USSR - but if you are the age of many of my college students, you might not recognize the symbol (or know what the USSR was!). Most people today recognize the swastika on the pig's hat, but people from another time might not. Most people today would not recognize the chef as Joseph Stalin, but that was clear to Dr. Seuss' original audience. You have to know something about history to recognize that the cartoon represents Stalinist Russia's defeat of Hitler's army outside of Stalingrad in December of 1943 (notice the C 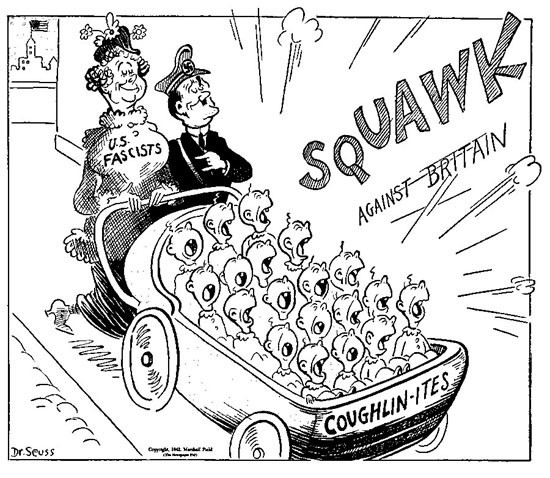 Here's another one that made immediate sense to the original readers. "Coughlin-ites" refers to followers of Charles Coughlin. Although he is obscure to us, Coughlin was the most popular radio speaker in the US during the 30s and early 40s (more than 40 million listeners, according to the infallible Wikipedia entry). Saying "Coughlin-ites" was something like saying "Ditto-heads" or "Limbaugh-ites" today. But Coughlin was sadly an anti-semitic Nazi sympathizer who blamed the escalating European conflict on England rather than Germany. 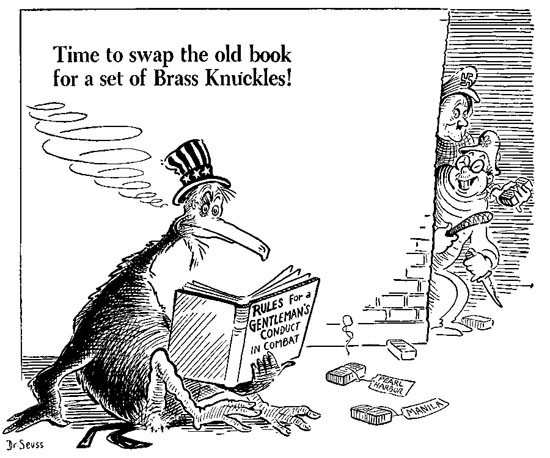 In this cartoon, labels help identify the topic. "Pearl Harbor" and "Manila" on a couple of bricks show that Dr. Seuss is talking about the Japanese attacks that brought the US into World War II. Dr. Seuss, like others from his time, clearly felt that Japan's unannounced and unprovoked attacks broke the rules of warfare - and now it was time to take up some of the same dirty tricks? There are only a few symbols here: the top hat on an eagle as a symbol for the US and a swastika for Hitler. Note another culturally-bound image: Hirohito is portrayed in a manner many would now regard as racist. But is Seuss racist? Reading his other cartoons makes me think not - he was in favor of civil rights for African Americans long before it was popular.
You can see the relevance for studying Revelation: we are likely to misunderstand the meaning of symbols, such as the beast, 666, Babylon, the two witnesses, or any others, unless we know how John's audience perceived those symbols in the first century. We also could easily misread the impact of certain images. Just as we might (mis)read Seuss as racist, rather than opposed to the aggression of Japan, some scholars (mis)read Revelation as anti-semitic, rather than responding to first-century Jewish-Christian tension.