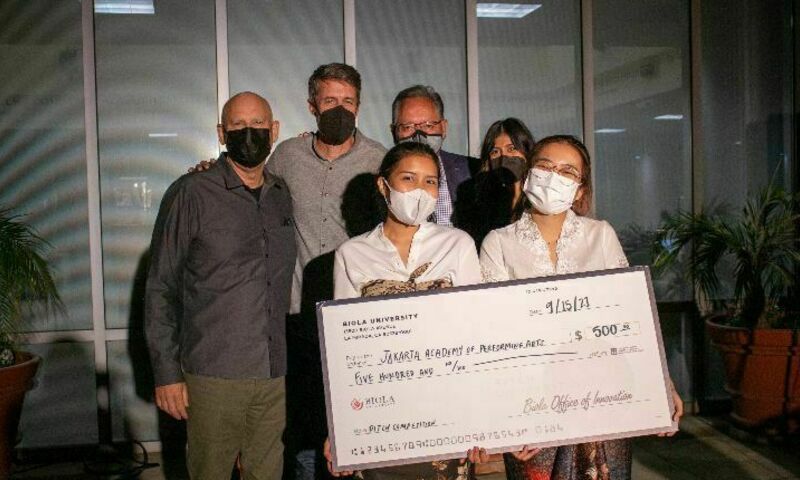 Under the lights of the Giumarra Library Courtyard, students gathered at the first annual Pitch Competition on September 15, 2021 hosted by Biola University’s Office of Innovation. Students entering the competition came in with a variety of levels of experience, each with the goal of winning a $500 prize by pitching a startup idea to a panel of judges.

Biola roommates Theatre major Raina Putri and School of Cinema and Media Arts student Andrea Florenza won the competition, and the $500 prize, wowing judges — former Chairman and President at DSD Partners Phil Gomez, Dean of Biola’s Crowell School of Business Gary Lindblad, and entrepreneur and Director of Women’s Ministries at Antioch City Church Parvarti Greenelsh and CEO and Co-founder of Three Good Braven Greenelsh — with their pitch for a performing arts school based in Jakarta, Indonesia. As they shared their own personal experiences with the difficulties of trying to find a strong performing arts education while growing up in Jakarta, judges were moved by their ability to weave storytelling and viable business strategies.

Surprisingly, this standout duo revealed that this was their first experience with presenting their vision to others.

“We’ve never done pitching before, so this is the first time we’re actually pitching our ideas,” Putri explained. “And the fact that they really appreciate our ideas for our country… it’s just amazing,” Florenza said.

But Florenza and Putri were not the only contestants to leave the judges impacted by their pitch.

The ideas presented at the pitch competition were diverse, representing different continents, industries and demographics. The common thread amongst the competitors was the desire to make the world a better place through innovative ideas. Every contestant started with a problem they identified in the world and a passion for creating a solution.

Florenza and Putri received the main prize, however, judges were moved by two other competitors' stories and unexpectedly offered support.

For B.S. in Business Administration major Ben Chi, this meant pitching a vocational training program for formerly incarcerated individuals because of his recognition of the difficulties that people face when trying to find work after prison. As Chi shared his idea for job training for the formerly incarcerated, judge and former Chairman and President at DSD Partners Phil Gomez was moved listening to the pitch, sharing a passion for helping those out of prison find jobs. Because of this, Gomez ended up offering mentorship and support to Chi after the competition with the desire to help him bring his vision to life.

“From graduate students to freshmen, our students certainly know how to solve problems, lead with empathy and pitch market-viable solutions,” said Jordan Terranova, Office of Innovation Director of Operations. “All the competitors had clearly thought deeply about the target market and opportunity their businesses presented to the market.”

Graduate Intercultural Studies student Nehemie Kasereka stood in front of the judges to present his idea for a mentorship program between senior and younger pastors in the Congo. Similarly, the Greenelshes were touched listening to the story of Nehemie Kaereka as he spoke about the difficulties that young pastors in the Congo face, often dying at a young age because of their lack of resources and support. Like Gomez, the Greenelshes decided to use their connections and experience to partner with Kaereka so that he can soon launch his mentorship program and begin supporting young pastors.

“The Office of Innovation was thrilled to see so many teams turn out for the first annual Pitch Competition,” said Jordan Terranova. “We were encouraged by the diversity of ideas, and the strength of the pitches. Can’t wait to see these ideas continue to flourish!”

Written by Lindsey Hayden, Operations and Marketing Coordinator for the Office of Innovation. For more information, please contact Media Relations at media.relations@biola.edu.