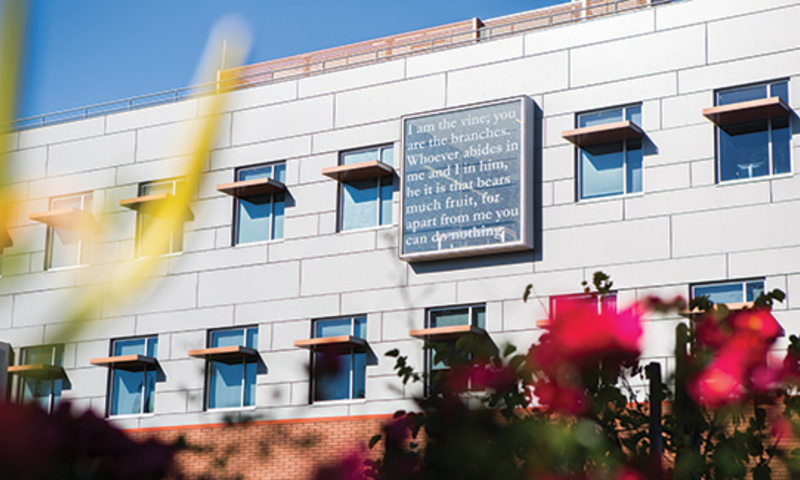 30 CREDITS OF BIBLE FOR ALL BIOLA UNDERGRADUATE STUDENTS

As one of Biola’s nine schools, Talbot School of Theology is responsible for all of the Bible curriculum and teaching in the classroom as well as much of the spiritual and biblical fidelity for the university. This includes the chapels, the hiring of faculty throughout the university, the maintenance of biblical fidelity, and the spiritual focus of the university. One of the primary features that Talbot serves is through the teaching of all of the Bible classes at Biola. As a Christian institution, students are required to take Bible classes throughout their time at Biola. All traditional students at the undergraduate level, despite their major, are required to take 30 credits of Bible as part of their education. This remains one of the highest number of credits of Bible for any Christian university in the country, and actually translates into a biblical studies minor for most traditional undergraduate students. While not all students in Biola are necessarily heading toward full-time vocational ministry, this Bible training is one of the significant traits of the university that marks alumni for the rest of their lives.

The goal of this training is to give our students a biblical worldview. This aligns with the mission of Biola University, which is “biblically centered education, scholarship and service — equipping men and women in mind and character to impact the world for the Lord Jesus Christ.” Without the strong commitment to the Bible and its truthfulness, there is no anchor to stabilize us through the crashing waves of culture and the spiritual drift that could happen as a result of its influence. Over the years, parents have commented that this standard of Bible classes is one of the main reasons they trust Biola with the education of their sons and daughters.

One of the most important parts of the commitment to the faithfulness of the Scripture has to do with the faculty. The faculty are the main influencers in teaching the Bible accurately. If the professor questions or dismisses a portion of the Scripture, its authorship or truthfulness, then students will likely follow this. This drift happens because of the strong influence and authority that the professor brings into the classroom. Professors have a huge responsibility before God to bring the truth of the Bible fully and correctly to the students. James 3:1 warns, “not many of you should become teachers, my brothers, for you know that we who teach will be judged with greater strictness.” This is a stern warning from God and his Word. All the Bible professors at Talbot take this warning seriously. For this reason, the vetting and hiring process of the faculty of Talbot School of Theology is very thorough.

The faculty of Talbot are world-renowned and respected in their fields of study. However, in order to teach at Talbot School of Theology, one needs to follow and uphold the doctrine of inerrancy. This means that the Bible is affirmed in its verbal, plenary inspiration of the original manuscripts. The Bible is not seen as true or infallible only in faith and practice. The inerrancy stance for each professor is then confirmed by a long and thorough written application process that is followed by multiple levels of interviews by different committees. Even after a professor is hired, they are asked each year to sign and re-affirm their beliefs in order to have current accountability if anything has changed. This maintains the faithfulness and commitment of the faculty to God’s Word.

The importance and value of faculty who are committed to the truthfulness of the Word of God is essential. They are basically the gatekeepers of the truth. If the faculty wavers on the truthfulness of the Bible, this then opens up a slippery slope for inerrancy to fall out. Unfortunately, this has been the story for many seminaries across the country and around the world. Fortunately, Talbot professors have remained faithful.

COMMITMENT TO STUDYING THE WHOLE BIBLE WITH THE ORIGINAL LANGUAGES

The Holy Bible is the inerrant Word of God in its verbal and plenary inspiration. This is a firm conviction of Talbot School of Theology and Biola University. With this commitment comes the unwavering trust in all that is stated in the Bible. Over the course of their time at Talbot, the students will study the Word of God through such classes as Hermeneutics and Bible Study Methods, Old Testament Survey, and New Testament Survey. These are among the classes that study the English Bible which allow the student to look at all 66 books of the Bible. But in a continued effort for students to get closer and deeper to the meaning of the Scriptures, Talbot also studies the original languages of the Bible: Hebrew, Aramaic, and Greek. This in part is due to Talbot’s high view of God’s Word and the school’s stance on inerrancy.

The seriousness of studying the original languages again affirms the commitment that Talbot has to the Holy Scriptures. This allows the student to see and understand nuances of the Bible that may not be so clear or apparent from just the English text. One scholar uses the analogy of utilizing the original languages in seeing the Bible in “high definition” when studying it. One of the trends that has recently been happening nationally during these days is that most seminaries are cutting the number of required credits for their M.Div. (Master of Divinity) degrees. Part of this is due to affordability issues. Unfortunately, the first classes to be cut are typically the original languages. While Talbot did reduce the number of credits from its M.Div. degree, the school retained the original languages and even increased the number of Hebrew classes for that degree. This shows the importance and commitment of Talbot to the Word of God. The Word of God is highly valued and cherished within the school.

A DISCERNING BUT NOT DISMISSING ATTITUDE

Another trend that is disturbing to see in some seminaries is the overly critical perspective of the Bible, which often leads to the dismissal of key passages. These passages are often deemed irrelevant, outdated, or obsolete rather than timeless, relevant, and authoritative. Today in many mainstream seminaries, students are taught to question the Bible for everything ranging from its authorship, historicity, content, and even practice. This is done under the umbrella of helping the students to think critically about the truth claims of the Bible. While this may be profitable at one level, it can often be more damaging in a day and age when many young people are deconstructing their faith.

Certainly, one of the biggest contributors to deconstruction comes from doubting the truthfulness of the Bible. The professors at Talbot School of Theology are careful and discerning over the many complex issues that accompany the Scriptures. But because they have a high view of God and God’s Word, they are not quick to dismiss it. They do not waver nor bring doubt to the students concerning the Word of God. They see the Bible as true, eternal, profitable for teaching, correction, and godliness (2 Tim. 3:16–17). For this reason, the professors will not question the truthfulness of the Scripture but rather will affirm and encourage it for its content and eventual practice.

A recent example of this happened when a student in class asked a question about the genre of the book of Genesis. This student had heard from another Bible teacher from a different school that the genre of the book of Genesis was a parable, specifically a historical parable. With this understanding, the student was then told that since Genesis was a parable that the characters described in the book were fictional, including Adam. This was quickly and kindly refuted and explained that while Genesis may have some poetic features to it, it is by large a historical narrative and that Adam was a real historical figure. It was also noted that this is later affirmed by both Jesus and Paul in the New Testament. The response was discerning enough to deal with this objection while quick to not dismiss this assertion. The lesson here demonstrates how wrong presuppositions about the Bible can have damaging consequences to one’s faith!

FROM BIBLICAL TRUTHS TO REAL LIFE

Knowing the truths of the Bible is certainly important for the believer and especially for each seminary student. But that is only one part of being a follower of Christ. The book of James exhorts the follower of Christ many times over to follow through and not just be hearers of the Word but also doers (James 1:22). This is why knowing the Bible alone is not enough. While biblical interpretation is vitally important, it would be incomplete without proper application of the truth. A practical component of this has been accomplished through the spiritual formation groups that Talbot students engage in as a part of their learning. These groups are a part of the Institute of Spiritual Formation, which trains students in spiritual direction. Many years ago, Talbot noticed that while a good understanding of the Scripture and its truths was occuring, the character and formation of the soul and the spiritual life was lacking. This unfortunately led to a lot of “smart sinners,” as the late Dr. Howard Hendricks used to say. Thankfully, Talbot responded with the Institute for Spiritual Formation groups and classes that encouraged the integration of faith and practice in real life to occur. As a result, many of our students are being formed wholistically and not just cognitively. This has been a huge blessing for our students who truly want to live out biblical truth in word and in deed.

Over the years Talbot has produced many fine pastors and leaders who teach the Word of God locally and nationally throughout the United States. They faithfully preach the Word of God on a weekly basis. Many of Talbot’s graduates are noted authors and scholars who continue to maintain the biblical commitments of the school. They are influencing the larger culture online in social media, through speaking, and through their writing. Talbot has sent these godly men and women into the world to be salt and light for the kingdom of God and to be a voice of the saving gospel of Jesus Christ. Talbot celebrates this faithful lineage that represents the Lord Jesus Christ.

Talbot School of Theology has faithfully held to its convictions regarding the Word of God since its beginning. This continues to be shown through the curriculum, faculty, content, and integration of God’s Word in students’ lives. In many ways, this has also led to the good reputation of the school and its graduates. For this reason, students from all over the world are coming to Talbot in person and online in order to have this solid biblical training. Talbot’s faithfulness and commitment to the Word of God is what the school is known for and has become one of the main draws for students to come to Talbot. In a time when there is so much uncertainty in the world and even the church, it is reassuring and refreshing to know that Talbot has not wavered. May God receive all the glory for his kindness and favor to Talbot School of Theology over the years.