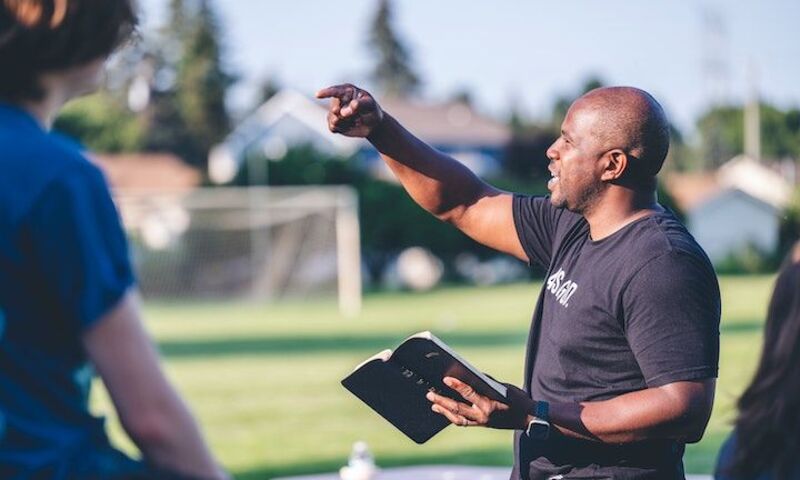 Yes. An elder has to be “able to teach.” It is one of the qualifications for becoming an elder. However, “able to teach” in 1 Timothy 3:2 may not mean what you think it means. My guess is that when most people see the words “able to teach” as a qualification for an overseer (or elder or pastor—they are all the same office[1]), they assume that it means that an elder has to be a good teacher. And by good teacher, they usually picture someone who speaks confidently in front of a room, holds people’s attention, communicates lucidly and motivates people to respond.

But this is probably not the correct way to think about “able to teach.” There are three primary reasons (and one supportive reason) why this word does not necessitate skillful communication, much less require an elder to speak from the front of a room.

1. The first reason is that this word appears in the middle of a list of character qualities. There are no other skill requirements on the list found in 1 Timothy 3:1-7. Lists, after all, are normally composed of items that belong together. Look at the other qualifications:

The notion of “skill” (such as NASB 2020’s “skillful in teaching”) does not fit well with this list of character-qualities.

2. The parallel list of qualifications in Titus 1:5-9, which clearly and obviously parallels 1 Timothy 3:1-7, does not use the word didaktikos at all. Rather, Titus 1:9 appears to explain what Paul intended with the word didaktikos in 1 Timothy 3:2. A qualified elder in Titus 1:9 is one who is “…holding fast the faithful word which is in accordance with the teaching, so that he will be able both to exhort in sound doctrine and to refute those who contradict.” In other words, an overseer/elder must be one who knows doctrine, and, for that reason, is one who is able to instruct in what is right and wrong doctrine. The requirement is not about communication skills.

3. Furthermore, the only other time that didaktikos (“able to teach”) is used in the New Testament is in 2 Timothy 2:24, which, like Titus 1:9 focuses on correcting those who err in what they believe: “The Lord’s servant must not be argumentative, but be kind to all, able to teach…with gentleness correcting those who are in opposition, if perhaps God may grant them repentance leading to the knowledge of the truth…”

Consequently, didaktikos in 1 Timothy 3:2 most likely means that an overseer/elder needs to be someone who knows Christian doctrine well enough to generally promote it, recognize false doctrine, and correct false doctrine.

This interpretation receives additional support when viewed against the backdrop of the overall argument of 1 Timothy, which has as a crucial component the correction of those who teach false doctrine (1:3; 4:3; 6:4; 6:20; cf. 2 Tim 4:3-4), the calling out of “teachers of the law” even though they don’t know what they are talking about (1:7), and warnings against any who might disseminate “doctrines of demons” (4:1).

Nor does the “teaching” have to be done from the front of a room. Such a requirement is neither stated nor implied. Granted, an elder has to be competent, at least on the personal level, to articulate sound doctrine and correct aberrant teaching, but his ableness-to-teach can occur one-on-one or in small groups; it does not have to be instruction in front of a crowd.

Consequently, a candidate for elder is not disqualified if he fails to be an interesting up-front speaker! If he knows the Word of God well enough to correct those who need correction, he has met the qualification that he be “able to teach.”

Furthermore, elders who feel insecure because they are not strong up-front speakers need not worry that this somehow disqualifies them from serving in church leadership. Granted, some elders (overseers, pastors) do more teaching and preaching than others (1 Timothy 5:17)—and rightly so—but that fact does not disqualify an elder who primarily leads and serves in other ways.

So, does an elder have to be “able to teach”? Yes, but that phrase doesn’t mean what most people think it means.

The ideas for this post started in my book, What Are Spiritual Gifts: Rethinking the Conventional View, pages 90-91.

[1] We should think of the office of pastor (lit. a shepherd), overseer, and elder as being one-and-the-same office in the first-century church. Note particularly Acts 20:28, “…among which the Holy Spirit has made you overseers, to shepherd the church of God” and 1 Peter 5:1-2, “Therefore, I exhort the elders among you, as a co-elder…shepherd the flock of God which is among you, exercising oversight.” Note also that 1 Timothy 3:1-2 refers to these leaders as overseers, whereas Titus 1:5 refers to them as elders.