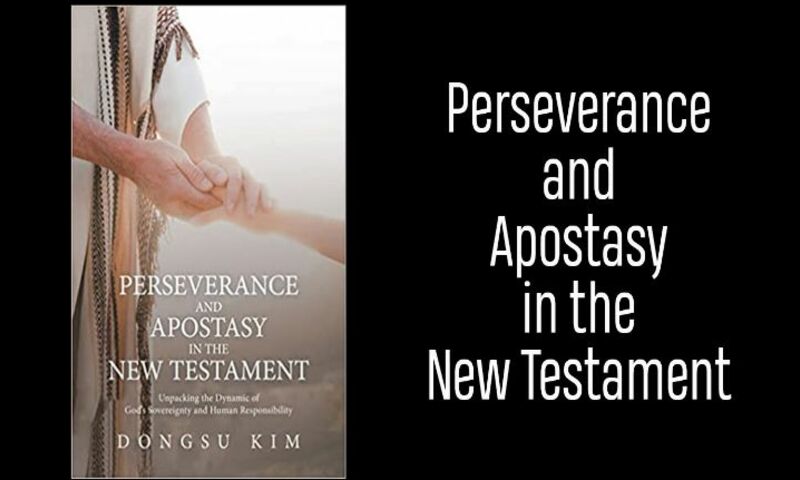 Dr. Dongsu Kim recently published a valuable (and very large!) book entitled Perseverance and Apostasy in the New Testament: Unpacking the Dynamic of God’s Sovereignty and Human Responsibility. Coming in at almost 1,000 pages, this is the most thorough treatment I have ever encountered of New Testament passages dealing with the question of whether a true Christian is eternally secure (perseverance), along with what happens when a professing believer deliberately turns away from Christ (apostasy). Kim graciously agreed to answer some questions for me.

Berding: Thank you for being willing to do this interview with me. Can you start by telling me why you decided to write this book?

Kim: More than two decades ago, I wrote my Ph.D dissertation on John’s concept of apostasy in his narratives of Peter and Judas. I argued that John deliberately contrasts the two figures, admonishing believers to follow the model of Peter’s perseverance, rather than Judas’ apostasy, to secure eschatological salvation. After writing that, I continued to be curious about how other New Testament writers dealt with the subject of perseverance and apostasy, and so continued to study.

Along the way, I encountered Dr. B.J. Oropeza’s book on apostasy in the New Testament. In three volumes, he argues that the New Testament writers are not united in their understanding of apostasy because they lack unity in their Christology due to their different social and cultural contexts. Oropeza’s view is nothing less than a serious challenge to the biblical doctrine of Scripture as the inspired Word of God. After reading Oropeza’s disturbing take on this topic, I decided to examine his thesis by investigating all the passages in the New Testament relative to the subject of perseverance and apostasy, resulting in a challenge to his position.

Berding: What are the findings from your study regarding the subject of perseverance and apostasy in the New Testament?

Kim: My study affirms that the New Testament writers uniformly believe and communicate the same view on perseverance and apostasy. God’s elect cannot apostatize because God preserves their salvation by the work of the Holy Spirit. Furthermore, true apostates are un-regenerates from the start and impossible to be restored. The unity found in the New Testament on the concept of perseverance and apostasy derives from Jesus’ teaching about the sin of blasphemy against the Holy Spirit. Later writers of the New Testament write about the sin of apostasy against the backdrop of Jesus’ teaching as they address their specific pastoral needs in their respective historical circumstances.

Berding: What would be some theological implications of your view on perseverance?

Kim: Perseverance is a gift from God, just as faith is a gift from God, from the beginning to the completion of salvation. Perseverance is not an onerous burden for believers to try to achieve in order to obtain eschatological salvation, but rather it is an inevitable result of God’s election and preservation. Peter could only escape the fiery arrow of Satan’s temptation because of Jesus’ intercessory prayers on behalf of Peter throughout Jesus’ earthly ministry; whereas Judas was lost by apostasy because Judas did not receive Jesus’ grace of protection from Satan.

My exegesis of relevant passages demonstrates that the principle of election (or preservation) versus non-election (or reprobation) applies to everyone. Of course, this view might sound cruel and depressing to some who read this, because it might make them feel that they have no control of their own destiny, thereby making it seem unfair that their destiny is predetermined apart from their will. However, they must admit that their freedom of choice already includes some external restraints. They have not chosen such things as their parents, siblings, neighbors, country, or skin color. Indeed, everything that anyone has, including one’s own identity, is a gift from God; and even matters relative to salvation of the soul are not an exception. Nothing in this world happens outside of God’s sovereign decree and providence, which are unfathomable to humans.

Humans need to humbly admit the infinite gap between God as Creator and them as creatures. No matter how hard people may resist God’s will, they cannot change their lot before God because, as Paul says, God is the potter and humans are nothing but clay. But at the same time, people are responsible for every choice that they make before the tribunal court of God in the end time.

Berding: If people reading this post decide to purchase a copy of your book, what can they expect to find inside?

To chart the outline of the book, chapter one introduces the book. Chapter two surveys select works on perseverance and apostasy. This helps locate the current study in its proper perspective in the study of apostasy in the New Testament. I have assessed works of G. C. Berkouwer, D. A. Carson, Judith Gundry Volf, and Thomas R. Schreiner and Ardel B. Caneday as representatives of the Calvinist position. As for the Arminian view, I have surveyed books by I. H. Marshall and B. J. Oropeza. Chapters three through eight contain my exegesis of the relevant passages on perseverance and apostasy. Chapter three deals with the synoptic Gospels (Matthew, Mark and Luke), where I examine the similarities and differences in their treatment of the subject. I deal with the Gospel of John separately in chapter four, the book of Acts in chapter five, the Epistles of Paul in chapter six, the Catholic Epistles in chapter seven, and the book of Revelation in chapter eight.

Berding: Thank you so much for taking the time to introduce us to Perseverance and Apostasy in the New Testament: Unpacking the Dynamic of God’s Sovereignty and Human Responsibility. I appreciate the hundreds of pages of detailed exegesis of biblical passages represented throughout this book.

Kim: You’re very welcome. Thank you for the invitation.