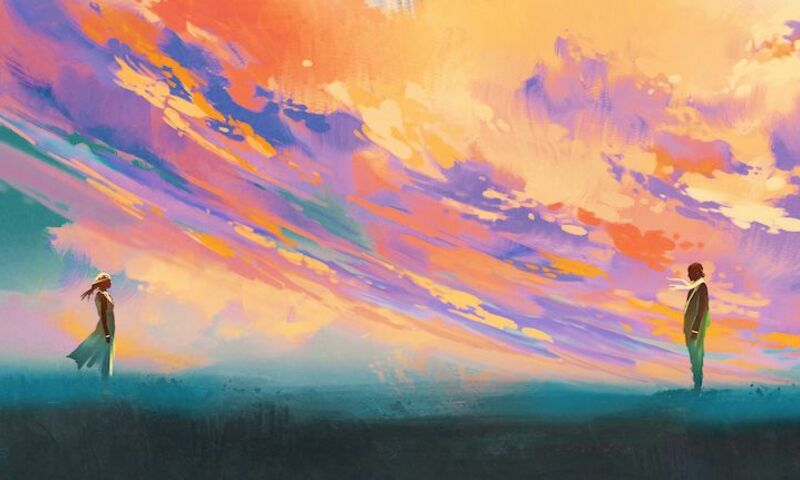 Submission and power in the same person? Inconceivable! Where do we see such a combination in our world? But such is not impossible in God's world. As we will see in this post, submission and power work together in the story of Eve in her calling as Adam’s ‘ezer, his necessary, powerful ally (Gen. 2:18). And even though he wears power and submission differently in his calling, it is also the story of Adam as we saw in Part 4. In both Eve and Adam, it’s the story of God’s Beautiful Difference within his Beautiful Equality for us about gender. It’s also the context for a very important matter he wants us all to learn about in this world — the word we all bristle at, submission.

Submission a response, not a role

As we saw with the authority/responsibility of the man toward the woman, the wider biblical vantage point is also critical to rightly locate submission in the gender conversation. The relationship of man and woman that gender circumscribes is horribly truncated by just saying everything is about authority for the man and submission for the woman. It is true that the woman’s position in their mutual submission (Eph. 5:21) is asymmetrical to the man’s, for she alone has the call “to submit” in a way differently than he does. Nevertheless, it would be a mistake to reduce her identity to “the submitter” and his to “the leader/head.” For one thing, as Sharon James and others have observed, “to order oneself under” (the meaning of the Greek word to submit, hypotassō), is an imperative given to her, it is not the “indicative” of her identity [1]. Along with Eve’s identity as the man’s ‘ezer, Scripture says she is the man’s “glory,” the one “made for him” (1 Cor. 11:7, 9) and the “weaker vessel” (1 Pet. 3:7) [2]. All will point to the larger contribution in the woman’s Beautiful Difference of her “for-ness” toward him of which submission is but one subtext [3]. Namely, her gender uniqueness is behavior that aims at his shalom, rest and promotion to build him up in his identity for their prosecution together of the mission of filling and subduing the earth [4]. It means much more than just being his ally in bearing and raising children [5]. It’s the call for use of a genius power toward the husband that Scripture says issues from gentleness, faith, yielding, vulnerability and patience.

Submission a Christian virtue, not a feminine one.

How does all of this work with biblical submission? As we saw before with authority, submission starts and ends with God Himself. Not only does God model it for us in the person of our Lord Jesus (1 Cor. 11:3, God [the Father] is the head of Christ [6]), but he created humanity to live “ordered” lives in submission within the institutions he has ordained [7]. Indeed, it’s a little sobering to consider, but not submitting is a mark of the flesh in Scripture (Rom. 8:7). It goes with all of the other unsavory things said about its sister, rebellion [8]. So, beginning with ordering ourselves under God (James 4:7) and Christ (Ps. 110:1) as the premiere of all our submissions, Scripture calls also for our submission to “every ordinance of man” (1 Pet. 2:13) in terms of governing authorities (Rom. 13:1–7) [9], submission to leaders of our churches (Heb. 13:17) [10], and submission to brothers and sisters in our churches (Eph. 5:22) [11].

It is within this larger submission-vocation for everyone that wives also hear a special call to submission within marriage. They hear it the same way their husbands hear the call to sacrificial initiative-taking, responsibility-bearing and representation that we saw in the last post. And while it might be thought of as a call to a greater vulnerability intrinsic to “orders” everywhere [12], within the mutuality of marriage it is still filtered through her identity as the “necessary, powerful ally.” It is not, as Sharon James remarks, a response that is degraded, brain dead or mindless, or that never challenges. It is a response that says “yes” to the husband’s God-given responsibility [13].

Submission an offering from power, not weakness

But we know well the pain of sin in the orders, too, especially of men acting selfishly toward women. The Bible knows of this, too, but its answer is not to put away the orders and level everything in sameness or anarchy [14]. Rather, as Peter tells us, Jesus is the way out (1 Pet. 2:21–24). Tried, sentenced, and even executed by illicit and unjust authorities, Jesus offers submission because of the strength he knows from his prior submission to his Father (“He entrusted himself to God, who judges justly,” 1 Pet. 2:23). The same pattern applies directly to the order of marriage for a woman with a man who is “disobedient to the word” (1 Pet. 3:1) to show that her position is not victimhood, submitting from a position of weakness and vulnerability. No, it’s quite the opposite — holy women have always managed the marriage order from the position of power they have from “hoping in God” (3:5). Secure in God’s providential and sufficient care — even to secure it through a disobedient husband — she can offer submission.

And that’s the key, she offers it. Submission is not coerced or pried from anyone in this scenario. It comes as a gift from the one with the greater power from the Greatest Authority to the one with less of it. For the disobedient have only the power of earth and flesh where those secure in God have the power of heaven and Spirit. This is the strong fortress supporting the submission that wives wield. It is the power of faith — and that is always a good thing in God’s economy (see Heb. 11:6).

With these last two posts, the contours of the Beautiful Difference of our genders is just sketched out. The picture emerging is one where difference grounds the unique ways the man and the woman serve and build up one another in the Lord. From here we look at what these behaviors look like in the community of redeemed men and women together in Christ’s body, the church.

Part six of the series will be posted next week.

[2] Note that we are talking only about her identity in relation to the man. Before God, the woman stands in the Beautiful Equality with the man as “fellow heirs of the grace of life” (1 Pet 3:7).

[5] Eve’s name (Heb, “living one” or “life giver”) and her identity as “mother of all the living” (Gen 3:20) notes her unique attributes in the conceiving and nurturing of life that Paul leverages to argue man and woman’s mutual dependence (1 Cor 11:12). Eve’s appearance in the narrative following the stipulations of the Garden’s moral order (Gen 2:17–18) shows the holistic nature of the partnership. Eve is Adam’s ally in the commission toward the creation and the relationship he will represent them in before God (Gen 1:28). Without her, neither happen.

[6] The extent to which the eternal divine relations of the Trinity are reflected in the “order” of their work is at the heart of the interpretation of this verse. For a serious proposal for divine equivalence that does not collapse or minimize the unique work of each, see J. Scott Horrell, “Complementarian Trinitarianism: Divine Revelation is Finally True to the Eternal Personal Relations” in New Evangelical Subordinationism? Perspectives on the Equality of God the Father and God the Son. eds. Dennis W. Jowers and H. Wayne House (Eugene, OR: Pickwick, 2012), 339–374.

[7] Robert Yarborough puts it this way: “”Submit” translates a word that envisions a particular order or setting and calls for a person to fit into rather than obstruct or seek to opt out of that ongoing order” (The Letters to Timothy and Titus [Grand Rapids, MI: Eerdmans, 2018], 517).

[10] Not hypotassomai here, but hypeikō (= to yield, give way, submit [BDAG]). It is listed in the same semantic domain as hypotassomai in Louw & Nida’s Greek-English Lexicon of the New Testament: Based Upon Semantic Domains (New York, NY: UBS, 1988).

[14] This is not to imply that we do not seek justice, never say No, don’t work for proper functioning of the orders, or that we submit to physical abuse.