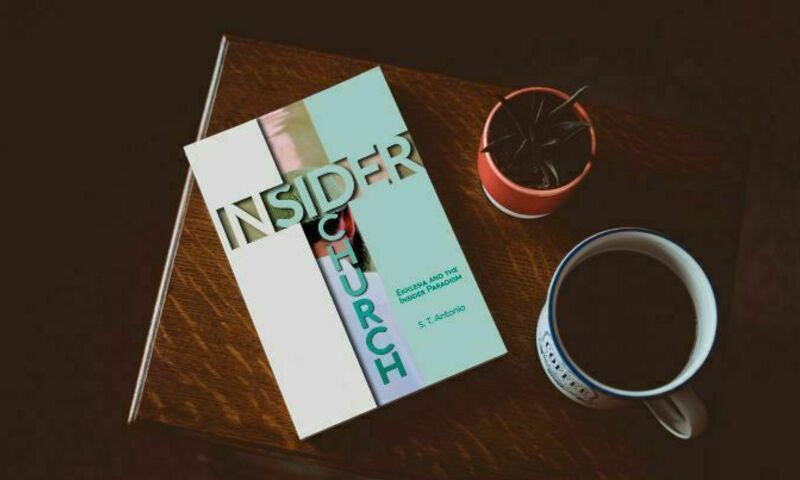 Muslims are coming to Christ all around the world. But what should a church composed of Muslim-background believers in Jesus look like? How contextualized can/should such a church be? I recently read an outstanding book dealing with the central biblical-theological and missiological questions surrounding this central question: Insider Church: Ekklesia and the Insider Paradigm. The book’s author, S. T. Antonio (a pseudonym) is a personal friend who currently lives and ministers in the Middle East among Arab Muslims. I reached out to him and asked whether he might be willing to do an interview about his new book. I am delighted that he agreed.

Berding: Tell us a little bit about yourself.

Antonio: I grew up in a Christian family in a non-denominational Bible church. I’m an alumnus of Biola University where I attended Torrey Honors College and majored in Biblical and Theological Studies, and where I also had the privilege of learning from you and other professors what it looks like to love God with mind and heart. I then headed eastward to Trinity Evangelical Divinity School in Deerfield, Ill., where I did an M.Div. and Th.M. focusing on missiology. I met my wife at Trinity in the middle of her Ph.D. studies and we followed the Lord’s call to serve in the Middle East among Arab Muslims, which we have been doing for the past six years. We have served in two different countries in various humanitarian and educational capacities, seeking to love our Muslim neighbors that they might be transformed by the love and grace of Jesus and spread that grace to others. I also serve as editor for a journal called Seedbed: Practitioners in Conversation which cultivates conversation among mission practitioners among unreached peoples.

Berding: Why did you write this book?

Antonio: I wanted to help myself and my fellow disciple-makers think biblically and theologically about the nature of the church and how that applies to Muslim discipleship and the “insider movements” debate. While I was at Trinity preparing to serve cross-culturally, I took a class called “Contextualization,” where I was first introduced to various approaches to ministering to Muslims, including the concept of “insider movements.” The classroom debate was lively and I was struck by how many godly, intelligent people in the mission community were divided on this issue. Since this was extremely relevant to my future work and a cause of sharp disagreement among friends and colleagues, I decided to devote my Th.M. thesis to the topic. I soon learned that for all that had been written on the issue, the conversation was often not particularly constructive or nuanced. I also realized that many people were not talking about the implications of this topic for biblical ecclesiology and the nature of the church, which became the focus of my research. After some years in the Arab Muslim world, I revised and nuanced my ideas in light of additional experience, in hopes that it would help colleagues and others interested in loving and serving Muslims in a way that is biblically rooted and fruitfully effective.

Berding: What is the basic argument of the book?

Antonio: The central argument of the book is that in order for us to be both biblically faithful and fruitfully effective in Muslim discipleship, we need a robust, biblical vision of the church. The insider movement’s ministry paradigm results in a particular vision of the church which contains some positive, stimulating features, but also some problematic elements which undermine the biblical nature of the church. Most people either fully affirm or fully repudiate insider methodology. However, if we take the time to carefully identify both the strengths and weaknesses of the insider paradigm, we actually help ourselves and others to arrive at a sharper, more nuanced framework that will serve us well as we seek to make disciples and plant churches in challenging contexts.

Berding: Can you tell us more about the basic approach you take in the book?

Antonio: The book is divided into two major sections. In the first section, I provide a fresh proposal on how to define the church biblically and theologically. I start with a biblical theology of the church, tracing the theme of the people of God in the Old and New Testaments. I then integrate this with a systematic theological perspective, offering a framework for defining the essence of the church, the local and universal church, the visible and invisible church, and other key topics. I also devote a chapter to the all-important topic of contextualization, providing basic biblical parameters for enculturating the church without losing its biblical identity.

In part two, I apply this biblical and theological framework to the insider movement’s paradigm, providing a critical analysis of the implicit and explicit theology of the church in insider-movement methodology. In this, I highlight where the insider paradigm gets it right and where it undermines a robust biblical understanding of the church. I conclude the book with some implications for the insider debate more broadly and specific recommendations for multiplying biblical churches among Muslims.

Berding: What are the implications of what you have written for those seeking to minister to Muslims?

Antonio: There are several implications that impact the way that we journey with Muslims as they become disciples of Jesus in biblical churches. One implication is that our discipleship strategy must include rooting Muslim-background believers in the full biblical narrative and the full scope of images of the people of God in Scripture. This is the greatest resource to help Muslims come to understand and live out the full glory of their identity in the body of Christ in their context. If people’s understanding of the church is limited to one or two passages or one or two biblical themes, our vision of the church is likely to be distorted or incomplete.

Another implication is that our discipleship should include a clear and robust understanding of both the local and the universal body of Christ which is sensitive to the cultural and social challenges that face disciples in Muslim communities. There are two opposite errors that people fall into. On the one hand, some have an overly simplistic definition of the local church, as if it is not much more than an occasional prayer meeting where two or three are gathered. On the other hand, some have an overly Western definition of the church which has lots of theological content but does not adequately separate biblical universals from cultural particulars (expensive buildings, pulpits, four-piece musical bands, etc.). What is needed is a strong, biblical vision of the church which contains all of the biblical elements of the local and universal church while having the cultural flexibility and mobility to actually be sustainable in high-persecution contexts. The amazing thing is that the church in the book of Acts is an excellent model, as it was in a context much more similar to modern Muslim contexts than established churches in more liberal, democratic societies.

One final implication to point out is that the identity formation of Muslim-background believers cannot ignore a new corporate identity as members of the family of God, both globally and locally. While believers may want to retain certain aspects of their cultural and family identity in order to honor their parents and their community, discipleship is incomplete if believers do not develop a clear understanding and application of their social belonging in the people of God, both visible and invisible. This is extremely challenging in Muslim contexts, but it is not impossible, and in some places in the Muslim world, it is happening! We must pray and persevere until we see the Lord build his church, as he promised.