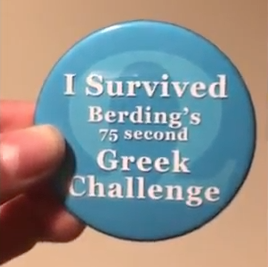 Can you chant by memory through all of beginning Greek grammar in 75 seconds?[1] Everyone in my Greek classes can do it in 90 seconds, but successfully chanting through Greek grammar in 75 seconds is difficult—even harrowing: alphabet, article, noun endings, indicative verb endings, general verb forms, participles, infinitives, imperatives, contract forms, and forms of eimi … all in 75 seconds or less! Anyone who survives this public ordeal receives a button displaying these words: I SURVIVED BERDING’S 75 SECOND GREEK CHALLENGE. This year seven students received the coveted buttons, and you can watch a montage of the famous 75 second Greek challenge to see it for yourself. Many thanks to Jorden Harber for the video. The successful students in order of appearance are: Jorden Harber, Jonathan Yu, Drew Botts, Masaki Ito, Josh Swigart, Alex Worthington, and Isaac Baumheckel.