Kenneth Berding (Professor of New Testament at Talbot School of Theology) recently wrote and published The Apostolic Fathers: A Narrative Introduction. We wanted to learn more about this book, so we had Ken respond to some questions: 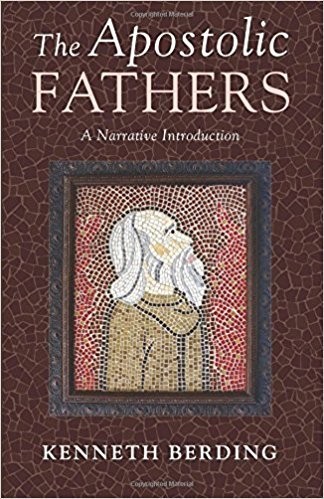 Congratulations on the publication of your new book! We’ve heard it described as a creative introduction to the Apostolic Fathers. But, honestly, most introductions aren’t creative—or even interesting for that matter. How does this book qualify as “creative”?

What makes this introduction different from other introductions to the Apostolic Fathers is that it is written as a narrative. Polycarp of Smyrna, the most influential Christian of the early second century, is the main character. During the final week before Polycarp’s famous martyrdom, he hid from the authorities in a country house just outside Smyrna along with a few other Christians (yes, that actually happened). This book imagines conversations that might have occurred between Polycarp and four companions during the final week before his death. Polycarp explains the Christian writings that were composed during his lifetime—those documents we normally refer to as the Apostolic Fathers. This novel approach (did you get the pun?) is what makes this introduction the simplest and most accessible of all introductions to the Apostolic Fathers.

The Apostolic Fathers are the writings of the earliest Christians who lived and wrote after the age of the Apostles. Some of the authors of these documents had been personally acquainted with Apostles. The oldest writings in the collection were written toward end of the first century, while the latest were composed around the middle of the second century. This creative introduction will familiarize you with the writings of Clement, Ignatius, Polycarp, Papias, Hermas, and others.

Why you? What qualifies you to write an introduction to the Apostolic Fathers?

First, my doctoral work included a focus on the Apostolic Fathers. Here’s the long title of my dissertation: Polycarp and Paul: An Analysis of Their Literary and Theological Relationship in Light of Polycarp’s Use of Biblical and Extra-Biblical Literature. The dissertation was later published in a monograph series by Brill. In the years since completing the monograph, I’ve written half a dozen academic articles and taught classes about the Apostolic Fathers. Perhaps most importantly, I lived in Polycarp’s city of Smyrna for a couple of years, and my oldest daughter was born there, so I have a deep emotional attachment to the person of Polycarp. Honestly, it sometimes feels like I know him personally.

What else is found in the book besides dialogs about the Apostolic Fathers?

Each chapter is followed by original translations of excerpts from the Apostolic Fathers that allow the readers to hear the authors in their own voice. Following the main body of the book are 35 pages of literary and historical endnotes that ground assertions found in the narrative. Those notes are linked to the dialogs through text-snippets rather than footnote numbers. I didn’t want to clutter up the dialog with footnote numbers; the goal was a smooth and enjoyable read. The back of the book also includes study questions for classes, small groups, and personal learning. I’ve even included a map to help you geographically find your way around!

How can I get a copy?

The easiest way to purchase The Apostolic Fathers: A Narrative Introduction is probably at amazon.com (the link is below). The book can be purchased in print form (paperback or hardback) or electronically.