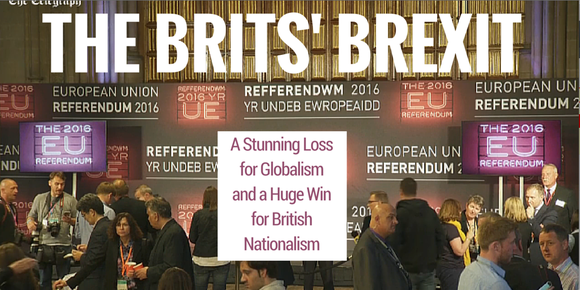 It’s official. Or essentially official. Sure, it’ll be contested and the process and the unfurling of the never-before-used Article 50 (the document governing agreements to leave the European Union) will take a couple of years, but with 100% of the nation reporting, the people of Great Britain have decided “enough is enough.”

With 52% favoring the move, Brits have formally voted to exit the European Union—hence the term “Br(itish)exit.”

After two years of speculation and bitter fights that spanned the halls of Parliament, all the way to the shores of Washington D.C., the people have spoken: They want out. No, it wasn’t by a landslide, but that’s immaterial. The vote has been won. A simple majority is what is needed and that’s “democracy” folks!

US Politicians and the Brexit

Ironically, the U.S. President Barack Obama went to Britain and made the unprecedented, offensive, and publically-rebuked move of trying to drive the British populous to “Remain.” This decision to insert himself into foreign politics led to an uncomfortable and embarrassingly sharp rebuff by Chris Grayling, leader of the British House of Commons.

But many Republicans, Libertarians, and nationalistic Democrats were more in favor of the Brexit. Still, even approaching the vote, both Mr. Obama and Democratic Presidential Contender Hillary Clinton continued to speak against the Brexit, even making threats about Britain being in the back of the line for future trade deals.

Nationalism. The Brits chose, albeit by a thin margin, to exit the European Union in favor of Nationalism over Globalism.

Nationalism often gets a bum rap and is sometimes associated, unfortunately, with evils like racism, supremacy, imperialism, and other over-the-top critiques. At its core, Nationalism is about maintaining the integrity of one’s country and its associated society, along with its cultural values, mores and, yes, laws. Without a strong sense of Nationalism, countries inevitably cede ground to external interests that may or may not have that nation’s best interests in mind. As a result, non-citizens are afforded rights and entitlements similar to or, in some cases, greater than the citizenry itself. This leads to a disenfranchisement of the people by those outside the sovereign nation who have no “skin in the game” but who are able to influence other nations’ policy and life or lifestyles within other countries.

Brits felt “enough was enough.” The people felt that legal and legitimate citizens’ rights were being displaced or otherwise abused by outsiders because of the broken promises of globalization.

Several of the problems within the European Union (EU) were making their way toward the English Channel and, had they crossed over, the damage to the heart and soul of the nation may have rivaled the threats faced in the Battle of Britain decades before.

The problems of the EU are many and storied. Least of all was not the incredible excesses and destruction of the EU’s borderless society. Indeed, the influx of now-unprecedented numbers of illegally-entering immigrants from other countries and continents disproportionately and negatively impacted essentially every nation-state they entered. In fact, one can hardly think of any real advantage of this massive migration that has occurred, since it’s been established that, percentage-wise, precious few of the immigrants have come to Europe due to genuine refugee considerations in war-torn Syria compared to the opportunistic migrants who traveled for purely economic reasons. One of the problems with this is their exploitation of those nations’ good will toward legitimate refugees in order to bilk the system which, after only a couple of years is unfortunately creating unsustainable economic challenges for even the most wealthy of nations, much less troubled nations like Greece.

The fundamental issue here is the reason (or reasons) for the Brexit. They’re all wrapped up in the garb of Globalism. Globalism is essentially an ideology that elevates the interests and status of the world (globe) over the rights and responsibilities of individual nation-states. In this worldview, because the world-globe becomes sovereign, it might be called an “ism” or belief system.

Globalism is an offshoot of the many forms and features of globalization—some of them good, some of them bad. But fundamentally, globalism is imbibed with a number of enormous assumptions that Brits, and many Americans, consider potential existential threats to national sovereignty and safety. This is because, in globalism, a type of “distorted universal imperialism,” if I may call it, is at play. In other words, the world, as a whole, becomes an imperial power that overrules national interests.

The erroneous assumptions being called out by Brits in The EU Referendum are as follows:

Post-Brexit Challenges for the European Union

The entailments in the UK and the EU will be many and varied.

They will last years and even decades. These will include challenges such as the potential severe weakening of the Euro as a currency (due to the loss of the United Kingdom’s substantial financial resources), the disproportionate packing of illegal immigrants throughout Europe without the ability to shuttle millions of illegal and undocumented immigrants further westward into England, Wales, Scotland, and Ireland; it need not be said that Ireland could ill-afford it in the first place, with its already-troubled economic system.

What’s more, the unwillingness of certain groups to integrate into those host societies will continue to cause strain. Not only will the rule of law continue to be disrupted through certain accepted behaviors of some immigrants in those originating cultures (so much for Cultural Relativism), but even greater problems will be in play. Specifically, the problem of Sharia-loving Muslims whose loyalty to Mohammadean Values (the religio-political teachings of Muhammad and modern Islam) will be at odds with the anti-Sharia worldviews of all non-Muslim nations they enter. Add to the mix some small percentage of Islamist extremists (such as those seen recently in Brussels and Paris), and you have a toxic mix of metanarratives that are simply irreconcilable with European values. That’s a recipe for disaster.

And therein are the problems with the EU as it currently exists.

Back in the United States, one could think of the Brexit as a novel political story or a nice distraction from American politics—a sort of nation-state sideshow.

But it isn’t. Ironically, some of the same challenges identified and faced by Britain may be faced, or are being faced, now in the United States. The same themes of Globalism present in the EU are at play here. Many of the issues outlined above are where the current Nationalistic debates in the United States are at least partially rooted. These themes of Globalism are a large part of the national ethos and are sometimes uncritically accepted by those who haven’t fully considered the Christian Worldview and its implications.

Your Turn: Sharpen Your Worldview by Considering These Questions

Here are a few questions to consider as you wade through the implications of Globalism seen in 3-D and High Definition throughout Europe:

Christians should be informed and on the forefront of helping others think through issues such as these. Though this is only a brief overview of some of the situations considered by British citizens in the EU Referendum, they are also things that citizens of the United States and Citizen Christians mull over in their minds as we seek to be loyal to our dual obligations to heaven and earth.