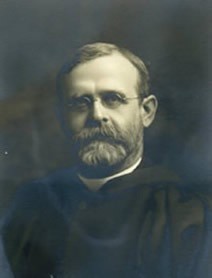 Born in 1861, W. H. Griffith Thomas died on June 2, 1924. His greatest and most sophisticated work is his book The Principles of Theology, a commentary on the Thirty-Nine Articles of the Anglican Church. But one short and reader-friendly book that should interest students of Christian apologetics is How We Got Our Bible. (Note: The full text of How We Got Our Bible is available online here.)

Some Themes Discussed in Thomas’ Book, The Canonicity of the Bible

On the question of which books are to be recognized as divinely inspired and constitutive of God’s written revelation, Thomas writes:

The answer is that it is quite easy to prove that our Bible is the same as the church has had through the centuries. We start with the printed Bibles of today and it is obviously easy to show that they correspond with the printed Bibles of the sixteenth century, or the time when printing was invented. From these we can go back through the English and Latin versions until we reach to the great manuscripts of the fourth century as represented by the three outstanding codices known as the Codex Sinaiticus (in Petrograd), the Codex Vaticanus (in Rome), and the Codex Alexandrinus (in the British Museum). Then we can go back still farther and compare the use of Scripture in the writings of the Fathers of the third century, and from these work back to the second century when versions in several languages are found. From this it is but a short step to the time of the apostles and the actual composition of the New Testament writings. There is no reasonable doubt that we possess today what has always been regarded as the Scriptures of the Christian church. (15-16)

As to the Old Testament,

The proof . . . can be shown along similar lines. Our Old Testament is identical with the Bible of the Jews at the present time. This is the translation of Hebrew manuscripts dating from several centuries past, and the fact of the Jews always having used the same Bible as they do today is a proof that all through the ages the Christian Church has not been mistaken in its inclusion of the Old Testament in its Bible. An additional evidence of great value is the fact that the Hebrew Bible was translated into Greek about two centuries before Christ, and this translation is essentially the same as the Hebrew text from which we get our Old Testament. (16)

Details of this proposal are elaborated in chapter 2, where Thomas states that “the basis of our acceptance of the New Testament is what is called in technical language ‘Apostolicity'; because the books came either from Apostolic authors, or through Apostolic sanction. Our view of the Old Testament corresponds to this” (23).

The Inspiration of the Bible

Thomas first approaches questions about the grounds for belief in the inspiration of Scripture in a natural but often neglected way. He reasons that the fundamental question is whether the Bible has divine authority. If there is good reason to think so, then we can ask how its authority was ensured. And the answer to that is given in the doctrine of inspiration. So his discussion begins with an argument for the need for a religious authority in the conduct of our lives and for the authority of the Bible as the answer to this need. He then expounds on the doctrine of biblical inspiration in chapters 9 and 10. But his stress is on the first point.

At the outset, two things should be said: (1) If we accept the Authority of Scripture we really need not trouble about any particular theory of Inspiration, but (2) if we seek to know as fully as we can what Inspiration means we should confine ourselves strictly to facts, since Inspiration when properly understood is not a theory, but a fact. It is something we accept, whether we can explain it or not. (86)

The facts considered in the development of a theory of inspiration are those that are presented in the Scriptures themselves, as these witness to their own nature and production. Thomas rehearses the familiar data of specific passages on this question.

Judaism and the Christian Doctrine of the Trinity

In the Old Testament emphasis is rightly placed on the unity of the Godhead as against the ‘gods many’ of heathenism. But in the New Testament there is the additional revelation of the Trinity, which is not only not contradictory of the Unity, but is based on it and developed out of it. Every one knows that the Christian doctrine of the Trinity never had the slightest connection with polytheism, but grew out of Jewish monotheism. It is significant that with all the Jewish objections to Christianity in Paul’s time, no trace can be found of any opposition to his doctrine of a distinction between the Deity of the Father and the Deity of the Son, which was the germ of the fully-developed doctrine of the Trinity. (79-80)

The explanation of this was that the Jewish believers, having been led by experience into an acceptance of Christ as a divine Redeemer (and thereby to a distinction in the Deity) found in their Old Testament anticipatory hints of the Trinity. They realized that the unity of the Godhead was compound not simple, as the Hebrew words for ‘one’ clearly indicate (Deut. 6:4; Exod. 26:6-11; Ezek. 37:16-19). (80)

Here we see sensitivity to a problem that would later arise with contact between Christianity and Islam. Whereas the Hebrew doctrine of God propounded in the Old Testament is not explicitly revealed as a Trinity, what is said of God there is (1) compatible with the Christian doctrine, and (2) revealed in anticipation of more to come.

For all of his emphasis on the requirement of faith and the authority of the Bible, Thomas is no fideist.

The Bible is supreme over reason. It is the light of reason and of human thought. Revelation, because it comes from God, cannot possibly dishonor reason, which also is from God. Reason is the judge of our need of revelation. It examines the claims of revelation; but once those claims are accepted, reason takes a subordinate place, and revelation is supreme. Reason examines, tests, sifts, inquires, but the moment it has become convinced that this or that comes from God, then, like Joshua of old, it says: ‘What saith my Lord unto his servant?’ So, though revelation is supreme over reason, reason examines the credentials of revelation and then submits to them. Since Christ is our Authority, what we need is the rational conviction that the Bible is the best form in which his Word reaches us, and then we submit to it, and it becomes supreme over our reason and life. (38-39)

There is always the theme of practical concern in this book about How We Got Our Bible. is not a technical treatise. It is quite intentionally written for easy accessibility. In his conclusion to chapter 10, on the inspiration of the Bible, W. H. Griffith Thomas warns against an overly-intellectualized approach to the questions he treats.

A great number of our problems are theoretical. They come from places where people spin theories absolutely remote from human life. But if we go out into the world and tell a man of the Lord Jesus Christ, and get that man to ask, ‘What must I do to be saved?’ we shall very soon get verification of the Word of God; and when we have that, we shall not need much, if any, further testimony to its inspiration. (105)

He means that commendation of the faith, when it issues in persuasion on the basis of good evidence, produces confidence in the Bible’s claim to be the Word of God.