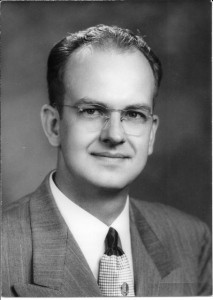 On April 25, 1967, the church lost a great Christian philosopher and apologist named Edward John Carnell. He was almost 48 years old. He was a graduate of Wheaton College and of Westminster Theological Seminary. He later earned doctoral degrees in theology and philosophy, at Harvard Divinity School and Boston University, respectively.

E. J. Carnell, was an ordained Baptist minister and one-time president of Fuller Theological Seminary. He authored numerous books, including four major works in Christian apologetics. All of these are in my personal library, well-marked and much-appreciated. He was intellectually rigorous and pastorally sensitive, a rare combination among defenders of the faith. His chief work in apologetics is the book An Introduction to Christian Apologetics. In the preface to the 4th edition (1952), Carnell asked, “If Christianity is not worth defending, what then is?” Here are a few of my favorite quotations from that book. On philosophy, logic, and experience:

Philosophy may not bake bread, but it has a strange power for making people do things. (32) We cannot choose between logic and experience. Without logic our experience cannot be normative; without experience our logic cannot be relevant to the human situation. (39) Coherence cannot stop with a segment of our experience; it must go on to embrace it all. (95)

Speaking of truth, he wrote: “The true is a quality of that judgment or proposition which, when followed out into the total witness of facts in our experience, does not disappoint our expectations.” (45)

On faith he said, “Too often faith is used as an epistemological device to avoid the hard labor of straight thinking.” (65)

I often ask students who are tempted to abandon their Christian faith, “But what will you believe instead?” Carnell made a similar point: “In considering Christianity, then, one must pay attention not only to the implications which flow from it as a given hypothesis, but also those which flow from its denial.” (97-98)

Carnell sought to develop a full-orbed apologetic, one that is realistic about all dimensions of human aspiration and sensitivity: “The mind is drawn by the true, the will by the good, and the feelings by the beautiful.”

I especially like his take on the necessity of special divine revelation:

The fundamental reason why we need special revelation is to answer the question, What must I do to be saved? Happiness is our first interest, but this happiness cannot be ours until we know just how God is going to dispose of us at the end of history ... Until we have definite information on the subject, we have no sure guarantee that He who made us will not also destroy us. (176)

On atheism he said, “A man must be everywhere at the same time to say there is no God, which is nothing but a short way of making himself God.” (186)

What about science versus the mysteries of Scripture. “The very presence of mystery in the Bible is prima facie evidence for the fact that it is dealing with, not avoiding, reality.” (208-209)

He held that our verdict regarding Jesus is worldview defining: “What a man thinks of Jesus Christ, therefore, determines his entire view of God and man.” (212)

I agree. And that is why I have every confidence that settling the question of Jesus’ identity, in relation to ourselves, is the most important task any of us will be asked to consider. What about science? It is useless in dealing with the human situation: “What scientific experience can change the vile heart of man? What chemical formula can prevent man from plotting that last war which shall destroy all life? Man, as ever, needs God to give his moral life direction and reason.” (229)

On the believer’s hope in the resurrection, if it never happened: “If a miracle—which never occurred—can be the basis for a real spiritual hope, then the time has come at last when we can put a square peg into a round hole and make it fit snugly.” (245)

Carnell’s other great work in apologetics, called Christian Commitment, is truly original. From this book, I will allow myself only one quotation. It captures what is fundamental to any prospect of coming into Christian conviction—a willingness to be willing to obey God, come what may: “But how do we explain the fact that the Psalmist loved the law of God? The answer is, he loved the law of God because it was the will of God.” (289)