Have We Been Sold a Homiletical Bill of Goods? (Using Biblical Illustrations)

This is the third in a series of blogs that look at dubious practices that have entered our preaching. All these questionable traditions are addressed in Talbot’s Doctor of Ministry track in “Advanced Biblical Preaching.”

The time to teach a biblical story is when it is the primary passage for your message, not when it is a secondary illustration of another passage. In other words, you should preach the story Joseph and his brothers as part of a series through Genesis, and not as an illustration of Romans 8:28.

Biblical illustrations are seldom as helpful or as effective as contemporary pictures from the everyday lives of your listeners and should be rarely used.

First, their events and situations are usually far removed from the experiences of our listeners and tend to strike them as “from a foreign culture, and from another age, when maybe God did such things.” Few of your listeners, hearing of Joseph, for example, expect to be sold to Egyptian merchants, to be seduced by their boss’ wife, to interpret dreams for convicts in prisons, or to become chief-of-staff to their country’s leader. Such experiences are difficult for your listeners to identify with; they’re not true to life today.

Second, preachers sometimes too quickly assume that a biblical story fits or illustrates another passage, and they end up connecting the passages in ways contrary to the theological intent of the original authors. The story of Joseph does not really fit the teaching of Romans 8:28. The point of Genesis 50:20 is that God used the brothers’ evil intentions to bring about good circumstances in Joseph’s life. But that’s not the point of Romans 8:28.

The point of Romans 8:28-30 is that God will work in your sufferings and weaknesses to bring about the good character of Christlikeness. Romans 8:28 isn’t teaching that no matter what happens in your life, God will bring good circumstances out it, but rather that the “good” he’s working in all situations is to conform you to the likeness of his Son.

For example, suppose you’re preaching Colossians 3:5-6, and your point is, “Greed brings God’s wrath.” If you then tell the story of I Kings 21—how Ahab’s greed for Naboth’s land brought God’s wrath—you’ve haven’t yet applied the biblical truth, you’ve simply repeated it. You haven’t advanced the message; you’ve gone backward: 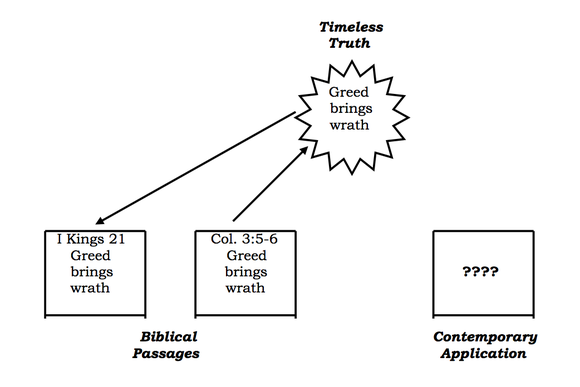