Curious What the Bible Says about Gender? Get This Book! 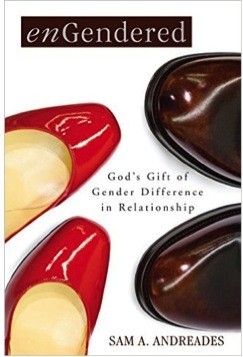 While I’m not usually too much into “merchandising in the Temple,” I must here. That’s because the book at issue in this modest review is a grabber. Not only does it concern a topic most pressing in our ever secularizing world—and therefore one Evangelicals must get good at talking about—it’s a topic that touches every one of us in everything we do.

The book is enGendered: God’s Gift of Gender Differences in Relationship (Weaver Books, 2015) and comes to us as a modification of a D.Min. thesis by its author, Sam A. Andreades. Andreades writes from many years of pastoral ministry in Greenwich Village, NYC, where the social and personal chaos of gender confusion was everyday fare. However the real stimulus for the book was the author’s encounter with a number of now heterosexually married men, who had also been in homosexual relationships/marriages. These were true insiders to the world of gender distinctions—those who had a living experience to judge whether those distinctions matter. So not only is the backstory intriguing, but it provides a significant confirmation to the Bible’s treatment of this ever-volatile question. Following are three reasons I personally found the book so compelling and empowering to men and women.

Although a veteran of what I may call “tangential” discussion of gender through the issue of women and men in ministry, this book showed me that the Bible speaks of gender in ways I did not. As a good Westerner accustomed to universals, theory, and principlizing, I spoke of gender in terms of “abstract qualities”—you know, lists of traits for what’s masculine or feminine. Men are systematizers; women are empathizers. Men are aggressive and competitive; women are nurturers and relational. And on it goes. Of course there is some statistical ground for the lists, but I was always troubled with the “outliers,” —the ones who didn’t fit their list. We all know women who are better systematizers and men who excel in empathy, for example. My approach didn’t have the gender chops to include the outliers. But the Bible does.

Here Andreades helps us see that in the Bible gender is defined primarily in terms of the other gender. This already rings true because it frames the discussion in terms of human identity in relationship, not identity in isolation—a more profoundly biblical approach (more later). But Andreades adds more. He says, “… the Bible’s gender-specific passages always concern the practices of individuals toward each other, rather than inherent qualities in isolation.” (p. 51) … “[The] Bible does not say, ‘A man is this’ and ‘A woman is that,’ but rather ‘Man, do this for her. Woman, do that for him.’ It is clearer on action than on essence.” (p. 56). More succinctly, “Gender is not just something we are, but something we do.” (p. 64)

The book will in its course address the 10 gender-specific passage of the Bible in the light of this relational and other-centered framework. Here’s an example of part of the discussion for Eph. 5:22-23:

Gender is a gift, a specialty, for developing another person in relationship. In a passage like Ephesians 5:22-23, the major marriage address in the NT, this is certainly the case. The husband takes on his masculinity in order to beautify his wife with attention and likewise the wife takes on her femininity in order to empower the husband with honor. In the Bible’s view, the definition of manhood is a very feminine affair—its cultivation concerns and requires relationship with women … Similarly, the definition and cultivation of womanliness is a masculine affair. (p. 56)

The biblical discussion begins in the book where it should, namely in the creation narrative. But here again a “light bulb” went on for me as Andreades makes the observation that while biological gender distinctions (male and female) are part of the animal (and plant) world already created (days 4-5), they only appear in the narrative with the creation of human beings as the image of God (Gen. 1:26-27, day 6). Here the genius of the biblical definition begins to rise: gender, while built on the platform of biology, is more about human life in the image of God. Masculinity and femininity in human beings is intrinsic to the image of God, which of course roots the issue firmly in the person of the Triune God. Now the door is open for the claim that gender is at heart a topic not for individuals in isolation, but individuals in community with others—because that’s what God fundamentally is. Andreades asserts gender is “added upon our biology, shaping our identities and deeply revealing God’s Self.” (p. 38)

The power of any real claim in theology is measured in its capacity to adequately engage the biblical worldview. This means it can cover the biblical data in the same way the Bible does. No wobbled, special tweaking of biblical terminology, no exegetical shoehorning of verses “for the sake of the system,” no jargon loaded with freight alien to the Bible’s world. In these I also find enGendered an immensely satisfying read. Consider the attention to the big themes of the Christian worldview Andreades aims for in his project:

A definition of gender, I proffer, will appreciate God’s love of variety and be broad enough to acknowledge the outliers always among us. It will realize that no formulation can be accurate except one in terms of relationship to each other. It must flow from God’s nature Themself and take on the contours of Christian godliness. It will simultaneously insist on equality of the image-bearers and celebrate their profound asymmetry. (p.140)

The triune life of our God, the profound relationality of human life, the fundamental diversity of the creation (women and men are not identical), the created purpose for all we have—gender included—as resources to serve others, the ability to engage even the “outlier” — these are the big themes hard at work all throughout Andreades’ work.

Besides this, enGendered sings the melody of the whole canon. And this also makes for heuristic power as Andreades argues a case that is consistent in both testaments. The definition of gender, the grand asymmetries of the genders, and the status of a gender’s promotion of the other gender doesn’t change as the canonical Story unfolds. The status of women and what they are toward men in the NT is not different from what it is in the Old Testament. Same for men. See chapters 8-11. Leaving the conversation with Andreades one has the sense that here indeed is something trans-cultural and trans-epochal. Something not defined by whims of contemporary western society, but something universal, something human.

On that last count of not doing gender by the mores of western culture, enGendered also backs up its claims with the emerging results of social science. Only this is the social science we never hear because it doesn’t fit the narrative of a culture more and more dedicated to the leveling of gender distinctions or worse relegating it to the relativist’s trash heap of a mere “social construct.” Like all attempts to remake human life different than the Creator sooner or later the evidence will catch up. Just like it has for the Sexual Revolution … Check out the stats of the collateral damage for this cultural experiment at the Ruth Institute. Here is the stuff of good apologetics.

The same goes for the gender-leveling agenda pushed for the last 50 years. The evidence against it is steadily amassing and Andreades has done his due diligence with it. For example, intergendered couples that understand marriage as an “equal partnership but the husband is the head” report higher levels of appreciation, affection, understanding, and time spent together in their marriages than other couples (p. 152-153). So also the corollary: American couples with more gender distinct housework arrangements enjoy more sex. (p. 171) Finally, the reluctant concession by one researcher (who didn’t want it to be this way): “the raw dynamics of hierarchy have sexual power.” (p. 172)

With these and much more Andreades punctuates Scripture’s claim for gender being a gift to foster intimacy (the title of chapter 14). Framed this way it’s clear we are not dealing with something easily ignored or re-defined by our wishes. But in fact gender differences are powerful dynamic intended by God to enrich our human lives, because human life is life in relationship. Therefore, instead of marginalizing gender differences in our relationships, it’s really the opposite that we should be doing. The closer and more intimate the relationship, the more we should lean into our gender differences. The flourishing of the relationship depends on it. (p. 177)

There’s much more of value chocked into this book, but I’ll close with Andreades’ sobering words that give us the import of getting gender right for the sake of our world and ourselves. “If the Scriptures are right, … erasing gender lines make us less human, not more.” (p. 172)