Arnold Lunn was born to a Methodist minister, but he was himself agnostic and a critic of Christianity—until he was 45 years old, when he converted to the faith. Lunn died on June 2, 1974.

Lunn was a professional skier and full-time enthusiast. He founded the Alpine Ski Club and the Kandahar Ski Club. He brought slalom skiing to the racing world, and he’s the namesake for a double black diamond ski trail at Taos Ski Valley. 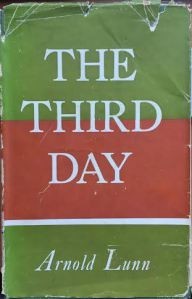 Lunn credited his agnosticism to the wholly unconvincing cause of Anglicanism. He looked in vain for persuasive arguments for the existence of God and the truth of Christianity. Later he would say that “an odd hour or two at the end of a boy’s school life might not be unprofitably spend in armouring him against the half-baked dupes of ill informed secularists” (The Third Day, xvii). He wrote in criticism of the faith and debated Christianity’s prominent defenders.

Despite his religiously agnostic stance, Lunn found that problems for scientific naturalism proved equally recalcitrant. This created a dilemma for him. But his vigorous opposition to Christianity was guided by an intellectual honesty that was helpless before the evidence he exhumed. In due course he gave up and converted to Christianity. All the energy he had devoted in the cause against Christianity he now mustered on behalf of Christianity. He published several books in support of Christian belief.

He famously debated two major critics, C. E. M. Joad and J. B. S. Haldane. The inside flap of his book The Third Day observes that Lunn was an effective apologist “because he has learnt apologetics in the controversial arena.” But Lunn is unusual for having taken alternate sides in this arena. As he wrote in a pamphlet, “I can imagine no better training for the Church than to spend, as I did, a year arguing the case against Catholicism with a Catholic, and a second year in defending the Catholic position against an agnostic.”

Lunn was prolific. He wrote manuals in skiing and mountaineering, fiction, memoirs, and popular books of Christian evidences. Personal letters between himself and both Joad (Is Christianity True?, 1933) and Haldane (Science and the Supernatural, 1935) were published, as well.

Here are a few excerpts from his book in defense of the resurrection of Jesus:

William Paley pointed out that human testimony is generally to be accepted when the “substantial truth” of witnesses survives despite “circumstantial variety.” This principle is practiced in courts of law when evaluating testimonial evidence presented during trial. The rule applies also in weighing the testimony of eyewitnesses to Jesus following his resurrection from the dead. Arnold Lunn puts the point this way:

If it could be proved that the various accounts which we possess of the events of the first Easter Sunday and of the subsequent appearances of Jesus to the disciples were not wholly consistent so far as details are concerned, this fact might be difficult to reconcile with any theory of direct inspiration or Biblical inerrancy but would not invalidate the evidence so far as the central fact of the Resurrection is concerned. (70-71)

Lunn is not conceding anything. He is not supposing that there are real contradictions in the eyewitness testimony. His point is that even if there were discrepancies, this would not disqualify their common testimony that Jesus did rise from the dead.

Lunn writes with good humor when he responds to a longstanding objection to the resurrection claim.

The anti-miraculist does not deny that the disciples believed that they had seen the risen Lord, but he asserts that they were victims of ‘collective hallucinations’. Anti-miraculists suffer from the collective illusion that a polysyllabic phrase is a satisfactory substitute, both for proof and for explanation. (74, with italics added here)

So, was it the risen Lord whom the disciples saw in the flesh, or did they merely imagine that they did?

To begin, circumstances must be abnormal for any normal person to hallucinate, and more so for groups of people. Next, eyewitnesses were slow to acknowledge that it was Jesus whom they had encountered during his post-resurrection appearances. It is a curious thing that Mary Magdalen, for example “saw our Lord and mistook him for the gardener” (75). This happened, as well, when a group of disciples encountered Jesus on their way to Emmaus. The disciples in the Upper Room thought they saw a ghost. In each case, those who were present had to be persuaded that it was, in fact, Jesus who appeared to them. Whatever it was that did the trick for them, it wasn’t some hallucinatory experience. Their initial experiences did not immediately issue in recognition or faint apprehension. For they had no genuine expectation that Jesus would be raised from the dead. “They didn’t run away with their first impressions, and tell unauthenticated stories of a miracle. They examined their first impressions and only by examination learned of their miraculous truth” (75). The disciple Thomas (the “doubter”) sought to preserve the utmost sobriety in consideration of evidence and would not even accept the testimony of his closest peers without firsthand experience.

It is indeed ironical that those who cannot accept the Resurrection of Jesus because it is unique are driven to postulate something no less unique, a ‘collective hallucination’ of a type not paralleled in all the records of human illusion, an illusion which has had an infinitely greater effect on the course of history than any admitted fact. (77)

The Origin of Primitive Belief in the Resurrection of Jesus

The real difficulty for any critic is to make sense of “the origin of a belief so contrary ... to human experience” and to the expectations of Jesus’ disciples. They would have to have been desperate fanatics to proclaim the resurrection of Jesus before the gaze of those who had crucified their Lord, and to endure physical persecution and martyrdom. Somehow they managed to rock their world with their message, as countless numbers came to believe on the basis of their testimony.

It has always impressed me that, though the tomb of Jesus was well-known to his disciples, there is no evidence of veneration, such as you would expect from family and friends with deep affection for a charismatic leader. As Lunn says, “From the moment that the women return from the Garden the tomb of Jesus passes, historically, into complete oblivion” (The Third Day, 83). If the disciples had not been convinced of the resurrection, they might well have regarded it as a shrine; they would have remained in Jerusalem rather than devote themselves to worldwide proclamation of a gospel they knew to be false.

Lunn examines several anti-miraculist hypotheses meant to explain the empty tomb. He calls these “anti-miraculist” because they are, without exception, motivated by a positive denial of the supernatural:

Lunn demonstrates that “a reconstruction of the situation” answers each of these objections and reveals them to be due to an anti-miraculist bias.

Secularism and the Decline of Morality

Lunn had a way with the pen. “If a man be nothing more than first cousin to the chimpanzee, he has no logical ground of complaint if he is put behind bars” (The Third Day, xi; italics are mine). As religion declines, so too does morality decline. Atheism dooms humanity to a denial of what makes human persons human and worthy of moral respect. Even if true, the effect is most unpleasant. I would add that if we are little more than a bundle of nerves and their impulses, operating mechanically in a purely physical and deterministic world, it should come as a a real surprise that we are capable of noticing this “fact” and finding it disturbing.

The “Aesthetics of Argument”

Lunn lamented the Revolt Against Reason (the title of a book published in DATE), manifest not only among notional Christians but also by scientific materialists. He happily owned the accusation that he was a Christian rationalist. Evidence was, for him, the only sure path to responsible belief. Emotionalism and the general neglect of reason exact a costly loss of confidence and a failure of witness.

To counter this trend, Lunn called for what he termed an “aesthetic of argument.” He says, in the introduction to his book that details the case for the resurrection, that his aim is to convert the unconverted. He was converted under the pressure of evidence, and ever after it was his lifelong ambition to assist others along that path. He was convinced that public debate, especially at universities, was a valuable investment in this cause. For it ensured that more would attend to the arguments out of curiosity about the outcome of a debate than they would at a church-sponsored meeting.

This has been my experience, too.

For any young person who aspires to the work of an apologist, I cannot recommend enough a close study of the life and work of Arnold Lunn. One could do with more admirable leaders in this field of Christian theology and practice.