Wright On?, Part One

One of my self-imposed projects over the January break is to read through N. T. Wright’s (most recent) magnum opus, Paul and the Faithfulness of God. The work is actually two separate books (at 600 and 1200 pages, respectively!). Book I is primarily concerned with backgrounds, and Paul’s worldview vis-à-vis paganism and Judaism. Book II deals with Paul’s theology and more directly engages the text of his letters. 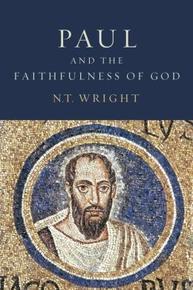 I do not agree with everything Wright says, but I have probably learned more from Wright than anyone else, about how to read the NT in its historical context. I am nearly through Book I of Paul and the Faithfulness of God, and I have not been disappointed. Wright’s encompassing grasp of the ancient world, and his prodigious understanding of the history of NT scholarship, allow him to tease out insights and connections that lesser minds (like my own) would never even stumble across.

Paul and the Faithfulness of God is Volume Four in a life-long scholarly project titled Christian Origins and the Question of God. Inevitably, those of us who have read Wright’s earlier works will find ourselves in familiar (and often redundant) territory here. But there is much that is new, as well, particularly where Greco-Roman backgrounds are concerned. Indeed, the three chapters on (1) Hellenistic philosophy, (2) Greek and Roman religion, and (3) the Roman Empire are well worth the price of the book. They should be required reading for any serious student of the NT who already possesses a rudimentary understanding of Greek and Roman history.

The confines of a blog post allow me to highlight only a few of the valuable contributions Wright makes, as he sets the stage for his discussion of Paul’s letters:

I found the chapter on Rome particularly helpful in view of the notion, championed by scholars in the UK (John Barclay) and in America (Denny Burk), that Paul nowhere has Rome on his radar screen as he pens his letters. Now, to be sure, Wright is too sharp a mind to get caught up in the PC trendiness of critical scholars on this side of the Atlantic, who see Paul challenging Roman imperialism at every turn, and who leverage the apostle’s anti-Roman rhetoric prophetically to confront perceived imperial excesses of American public policy and practices. Wright properly insists upon the derivation of Paul’s ideas from Judaism, and he does not seek to downplay texts like Romans 13, for example, where Paul offers his churches practical guidance for negotiating the realities of empire. Wright properly challenges us, however, to consider how Paul’s letters would have been heard in a world controlled by Rome, and saturated with the literary, numismatic, epigraphic, and cultic output of the imperial propaganda machine. It is certainly the case that terms like εὐαγγέλιον, υἱος θεοῦ, σωτήρ, and κύριος find their origins, for Paul, in the Old Testament. Wright’s historical overview of Rome and the imperial cult only served to reinforce my conviction, however, that Paul knew exactly how this rich LXX vocabulary would resonate in a Roman setting. And this, in turn, suggests that Paul has Roman imperial ideology directly in his sights in numbers of passages in his epistles. Exactly what it was about Rome that Paul went after is open to debate. But that he did so, in my view, is not. Paul and Silas were, after all, accused of advocating “customs that are not lawful for us as Romans to accept or practice” (Acts 16:21). Wright helps us to understand why.

Perhaps most refreshing about Wright’s work is his insistence that we read Scripture as “a continuous historical narrative with individuals finding their identity within it” (page 115), rather than as a collection of ahistorical propositions about the salvation of the individual. With but a single qualification—the obligatory caveat about the danger of false dichotomies—I could not agree more.

I rather doubt I’ll enjoy the second volume as much as I enjoyed the first, since I don’t always follow Wright’s lead in the nuts-and-bolts of Pauline exegesis. And Book I could probably have been written a bit more economically, perhaps 400, versus 600, pages. But I have found the first installment of Paul and the Faithfulness of God to be an encouraging and challenging book—encouraging, because it reinforces so many of my convictions as a historian; challenging, because it opens many new avenues of reflection. So, yes, Wright On!

This is the first part of a two-part series. To read the second post, please see Part Two.