Blood Moons and the End of the World

88 Reasons Why the Rapture will be in 1988 (a tome you can still purchase on Amazon, believe it or not). It was also the subject of a huge prophecy conference that year in the Anaheim Convention Center, I remember. The sequel came out a year later (same author) after obvious and awkward complications: The Final Shout: Rapture Report 1989 (also on Amazon, if you’re interested). Then we all remember the more recent predictions (and later apologies) of Harold Camping about the End of the World being May 21, 2011. Somewhat ironically, it happened that the final exam for my grad course in eschatology and ecclesiology was scheduled for that very day. Real believers, I told the class, didn’t need to study for that one! (No one took me up on it.) 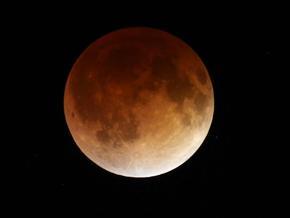 So now we have blood moons, tetrads, Jewish feasts, and cool-sounding apocalyptic biblical language (Acts 2:19-20, cf. Joel 2:30-31) all being marshaled to give biblical eschatology another black eye. While it’s true that this shiner is worn most by those actually fronting such things, I still get painted with it too. This is because I would probably have much in common with the “Blood Mooners” in the big questions of Christian orthodoxy, not to mention I also read Daniel, Jesus in the Olivet Discourse (e.g., Matt. 24-25), and Revelation as having application to the future.

It’s one thing to be a scandal for the Gospel--the Gospel of Jesus Christ is scandalous to the world. Paul felt that, and I am proud to own that, too (1 Cor. 1:18-25). But blood moons as signs of the prophecy clock ticking is a scandal in the wrong direction.

Now I’m all in favor of blood moons (awe-inspiring astronomical phenomenon!), tetrads (rare!), Jewish feasts (our overly Gentilized Church calendars should be more dominated by these—as they are fulfilled in Christ), and apocalyptic (it can be literal too—resurrection is a feature of apocalyptic and we all believe in that one). But put them together in yet another sensationalized, factually crazy (Greg Boyd’s words here are priceless), books-flying-off-the-shelf spectacle for the world, and I just shake my head. We’re in the same ditch as those who have no hope.

Actually, I wouldn’t mind at all if the blood moon clamor were right. I’ll take the Lord’s Day over this present darkness any time! But in saying this, I also know that such predictions have been part of the Church since its founding. Every generation has located the signs of the end in its day. So, if you have a new supposed fulfillment you’re cooking up, like blood moons, take a number and get in line! You have a lot of company.

Better is to keep one’s focus about the end times where Scripture does. Why has God given his people any knowledge of the future? These are the things I have confidence in:

2. Knowing God’s story keeps us from being taken in by those with other stories (see Matt. 24:5—there will be pretenders). It’s why God’s people don’t need Tarot cards, psychics, astrology, channeling, etc. In fact, for their good, God even forbids these of his people (Deut .18:14-15).

4. Most of all, prophecy proves who is God and who is not. Who else can say, “Truly I am God, I have no peer; I am God, and there is none like me, who announces the end from the beginning and reveals beforehand what has not yet occurred…” (Isa. 46:9-10)?

Someone wisely observed that God has told us just enough about the future so we don't despair, but not so much that we should not need him. Probably a wise balance and one I at least will aim for when the next blood moon comes around this fall.