A Hill to Die On: How Biblical Backgrounds Help Make Scripture More Engaging

Last Saturday evening, my wife and I had a delightful dinner out with two of our very best friends, John and Leah Hutchison. Before we left the house, I had about fifteen minutes to kill while Joann was still getting ready. The nerd in me has something laying right on my nightstand for just such occasions: a volume of Josephus’ Antiquities. I picked it up, intending to read a little Greek, and stumbled across a story that had escaped my memory but is worth revisiting. 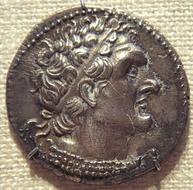 In the passage Jews and Samaritans are going at it in the presence of king Ptolemy Philometor (186-145 BC -- that's his mug on the coin), in Alexandria, Egypt. The point of contention has to do with what social anthropologists call sacred space. The Jews were convinced that God had chosen Mount Zion in Jerusalem as the place he wanted to be worshipped. The Samaritans insisted, instead, that Mount Gerizim, in Samaria, was God’s sacred real estate. They had even built a temple there to offer sacrifices. Now the two groups are arguing their respective cases before Ptolemy.

At one level, there is nothing particularly new here. We see the same disagreement reflected in an observation made by the woman at the well in John 4:20: “Our fathers worshiped on this mountain, but you say that in Jerusalem is the place where people ought to worship.”

What is striking in Josephus’s account, however, is just how high both Jews and Samaritans were willing to “set the stakes,” so to speak, with respect to the outcome of the debate. As the story unfolds, Josephus tells us that the disputing parties “requested the king to sit in council with his friends and hear their arguments on these matters, and to punish with death those who were defeated” (Ant. 13.75). Yikes!

The king gathers a large group of his friends, and the smackdown begins: “Sabbaeus and Theodosius made speeches on behalf of the Samaritans, while Andronicus, the son of Messalamus, spoke for the inhabitants of Jerusalem and Judea” (13.75).

The outcome? “Andronicus persuaded the king to decide that the temple at Jerusalem had been built in accordance with the laws of Moses, and to put to death Sabbaeus and Theodosius and their party” (13:79) — thus giving a whole new meaning to the phrase “a hill to die on.”

This is an informative illustration of both the value and the limitations of the use of background materials for New Testament exegesis. There are some examples where historical or cultural background illuminates a passage in such a way as to make sense of the text for the very first time. But this is seldom the case. Generally, extra-biblical data, judiciously applied, simply helps us to see more clearly — and appreciate more deeply — what is already apparent in the text itself.

We gain no profound new insights into the Jew-Samaritan schism (in general) or into John 4 (in particular), for example, from our text from Josephus. But we do get a better sense of just how seriously both Jews and Samaritans took their respective convictions about the proper place to worship God.

This, in turn, makes Jesus’ pronouncement in John 4:21 all the more striking: “Woman, believe me, the hour is coming when neither on this mountain nor in Jerusalem will you worship the Father.” In a instant, Jesus sweeps sacred space completely off the map (pun intended) in a world where holy ground was something to defend to the death.

Biblical backgrounds do for the interpreter what color cinematography did for The Wizard of Oz. You can follow the story just fine in black-and-white. But when that house hits the ground, and Dorothy walks out into a world of living color, well, the story is all the more engaging. So it is for biblical backgrounds. God’s story as revealed in Scripture is already quite clear. But it often benefits greatly from a little local color here and there.